Infographic: Where do we get our gas – and how much comes from Qatar? 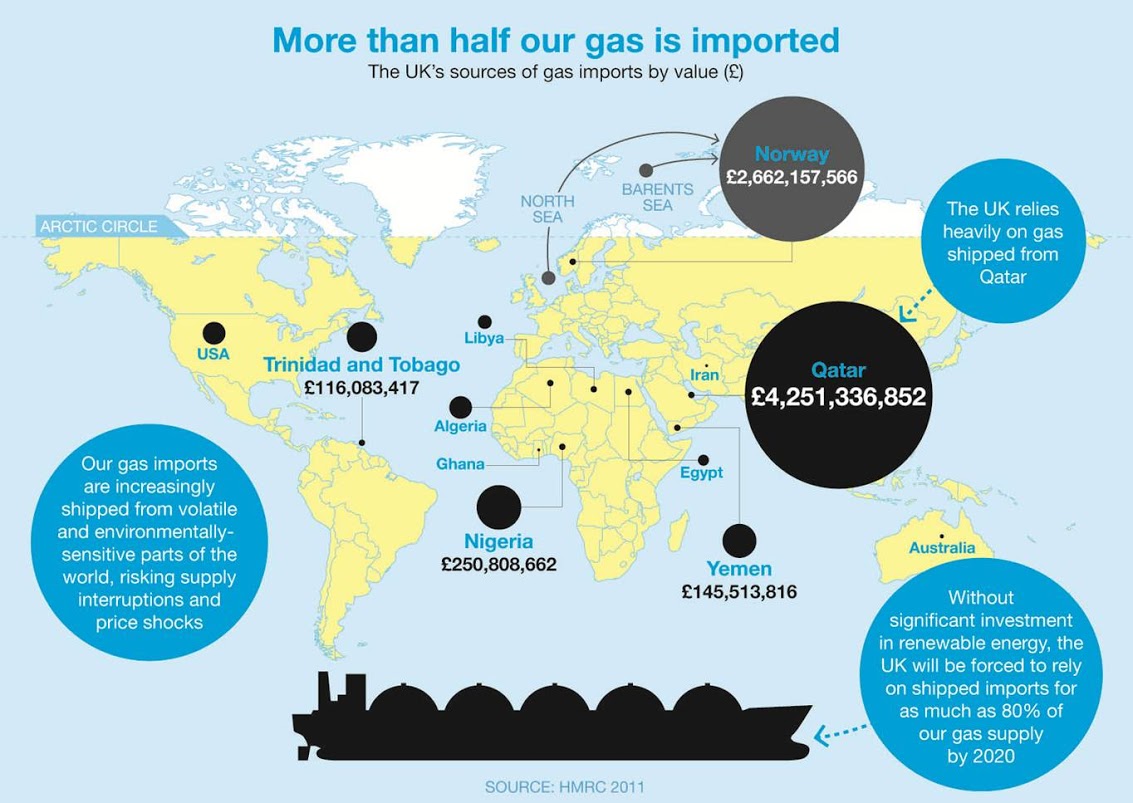 As the Foreign Secretary’s advisor Lord Howell is secretly filmed by Greenpeace warning that the Emirate of Qatar is “rather near a lot of jihadists” and if anything went wrong we’d be “up s**t creek” we investigate where we buy our gas from, and how much we pay:

Government data shows that last year most of the money paid by bill payers for imported gas went to the tiny Middle Eastern Emirate of Qatar – which is also due to host the next round of talks on tackling global climate change.

But Qatar is not the only country we rely on for gas imports which some may be inclined to view as at risk of instability. In 2011 the UK also imported gas from Algeria, Egypt, Libya, Yemen and even Iran (before sanctions took hold in 2012) as well as Trinidad and Tobago.

However in 2011 the amount spent on gas from Qatar, which holds the world’s third largest gas reserves, far exceeded all of the rest put together.

By our calculations last year the average UK household spent £89 on gas from Qatar in 2011, compared to £56 for Norwegian gas.

But we actually got more gas in from Norway – we just paid far less for it.

By comparing the amount we spent on gas (as reported by the HRMC) with the the volumes imported (as reported by the UK Government) Unearthedcalculated that Qatari ship imports in 2011 were about 70% more expensive than gas that comes in via pipelines from Norway.

It’s hard to be sure what made Qatari imports so expensive. Qatari gas, which comes in frozen via large tankers is usually more expensive than gas from the North Sea. But the scale of the price difference in 2011 shows the impact global events now have on our gas prices.

Last year’s Fukushima Nuclear disaster and the civil war in Libya increased demand for gas from Japan and cut supplies from parts of the Middle East.

Qatari cargoes, faced with multiple potential customers around the world, could perhaps charge more to head to the UK whilst the price for North Sea pipeline gas appeared to rise far less.

How much gas do we import?

In 2011 UK gas imports exceeded production for the first time since 1967.

In recent years, as UK North Sea production has fallen and imports doubled between 2007 and 11 the amount we spend on Qatari gas rose  from less than £10m in 2005 when recent imports started to over £4bn today.

So far this year has been relatively free from the kinds of events which can cause sudden jumps in the price of gas from Qatar.

However in the year to September bill-payers were again paying more to import Qatari gas then they were for gas from anywhere else.

This trend is set to continue with Centrica predicting UK gas imports will reach 70-80% by 2020. Many analysts believe the majority of this increase will come from Liquified Natural Gas via ships.

Over the longer term fracking for shale gas in parts of the UK may help replace declining North Sea reserves.

More reserve estimates are expected over the next twelve months but by current optimistic estimates of UK reserves is that there is about 20 trillion cubic feet of gas available for extraction.

That is around 2 years at our current rate of consumption – not enough to end our reliance on gas imports.

Shale may have an impact on where we buy our gas from, however. Extensive shale gas reserves in the US have opened up the possibility of the US competing with Qatar for gas exports, potentially lowering the price.

But the UK is unlikely to be the US’s most attractive export market.

Hard as it may be for consumers to believe, gas in Asia is even more expensive than it is here and with demand rising that is where most US shale gas will probably head.

In fact, every analyst surveyed by the government, expected the price of gas to keep rising – at least in the medium term – though of course, they may well be wrong.

Either way now the UK is so dependent on imports to meet it’s power and heating needs the issue is likely to stay top of the political agenda.

Bill payers, once protected by our relatively local market and large North Sea reserves, are now exposed to the political and price volatility of the global gas trade.