Fracking in the UK: Who owns the rights to drill for oil or gas in the UK? 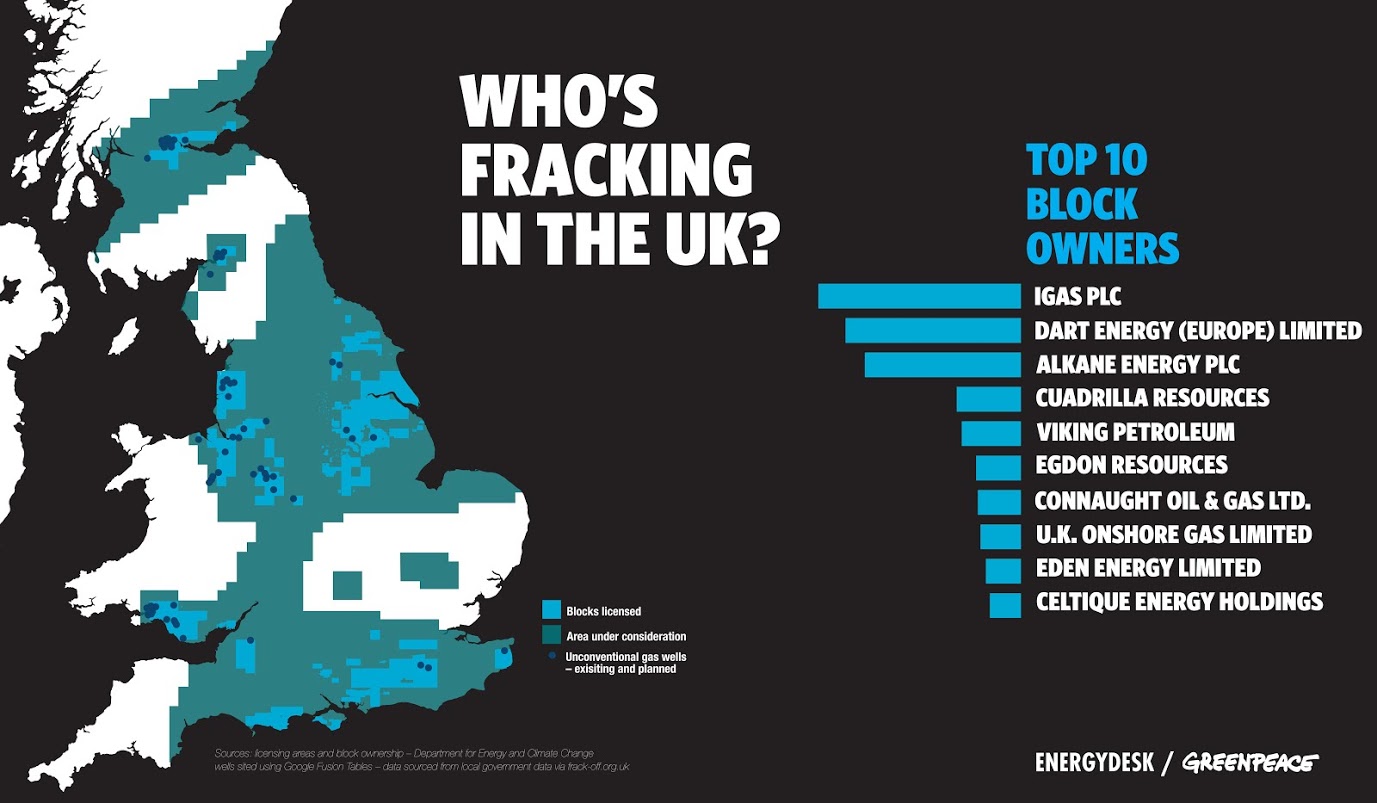 A Chinese state owned oil firm, CNOOC, linked by human rights organisations to allegations of rights violations in Tibet and Myanmar (Burma) is an investor in the UK’s onshore drilling industry – according to an analysis of publicly available data by Unearthed.

The oil giant, which completed its acquisition of global oil and gas firm Nexen in February has also been linked to oil spills in the South China Sea.

The company it holds a stake in, Igas, has an interest in a license area which includes chancellor George Osborne’s constituency.

Igas is one of the largest holders UK drilling rights alongside fellow unconventional gas explorers Dart, Cuadrilla, Viking and Coal Mine Methane firm Alkane. CNOOC is also linked to Cuadrilla’s co-owner, AJ Lucas through a Hong-Kong based investment fund.

The ownership of many of the firms proved impossible to verify as the full list of share owners was obscured by large ‘nominee’ share holdings through financial institutions. One firm, Viking, is owned by an investment division of Barclays.

The latest development comes as the UK’s onshore gas industry enters a period of rapid change – thanks to the prospect of tax breaks and exploratory drilling licenses for unconventional gas.

Whilst global energy giants including BP have suggested that UK shale gas will not be a ‘game changer’, smaller firms  – many from Australia, Asia and Canada –  and some UK aspiring gas barons have taken an interest in the UKs relatively low-cost exploratory drilling licenses

This means they would be amongst the first to benefit from any profits in the industry.

The UK’s Department Of Energy and Climate change (DECC) has made significant efforts to make all license and block ownership information public and their data, showing ever UK onshore drilling license and it’s owner, is now available on a Google Map here.

Unearthed has examined this data along with details of company ownership and business plans to try and work out who lies behind the UK’s incipient unconventional gas industry.

Current rights to drill in the UK are divided into license blocks shown in detail on this map. Within each license companies may own sub-blocks, or shares of a sub-block. As this is the most detailed data available we’ve chosen to rank firms by the interests they hold in these sub-blocks – our analysis can be found here.

Whilst this gives a general picture of the largest players less attention should be paid to the order. Many sub-blocks may not be suitable for unconventional gas, or companies may not intend to use them for that. More detailed information about this incipient information is needed.

Listed on the UK’s AIM exchange IGas holds the greatest number of drilling blocks – though many of them were obtained before the recent rush for unconventional gas.

Speaking to the Telegraph Igas’s chief executive, Andrew Austin (who is also a shareholder) was keen on the Nexen deal saying “The Chinese are well-known for their enthusiasm for unconventional assets.”

The rest of its shares are owned by i directors and institutional investors including UK Baillie Gifford and Henderson Global Investors, Swiss based Shroder Investment Management and Virgin Island based Peter Levene – of Levene capital.

Igas’s license blocks include one which encroaches on the constituency of the chancellor, George Osborne.

Australian firm Dart energy has built its portfolio in the UK through a number of subsidiaries and acquisitions including the purchase of Greenpark in 2011.

Its Australian parent company lists its shareholders in its annual report. The largest is Krestlake owned by the New Hope Mining corporation which, in turn,belongs to the Washington Soul Pattinson, with interests in everything from coal to pharmaceuticals.

Like many of the firms on this list much of Dart is owned by financial institutions on behalf of others, so-called nominee shares, which make it extremely difficult to verify who has an interest in the firm through publicly available data.

UK based and, so far as we can tell, largely UK owned company with a long history of Coal Mine Methane extraction (CMM).

The technique, which involves capturing and selling or burning methane from old coal mines is supported by many environmentalists and does not involve fracking.

The firm is looking to exploit its licenses for unconventional gas however, having recently signed a CBM deal with Aberdeen Drilling Management.

It’s two largest, and dominant, shareholders are Australian based AJ Lucas and US based Riverstone fund management with each owning around 40.7% of the shares (according to data filed with Companies house)

AJ Lucas’s annual report shows the firm is part-owned and heavily financed by a Hong-Kong based investment fund, Kerogen capital. Kerogen, in turn, is reported to have a partner agreement with CNOOC to invest in Asian and unconventional energy assets.

Cuadrilla’s other owner, US based Riverstone invests in a range of energy assets around the world. One of its partners is former BP chief executive, Lord Browne who has had roles advising the government on, amongst other things,higher education.

The relatively un-heard of Viking raiders are, in fact, owned by an investment division of Barclays bank – Barclays capital – via a string of companies including Barclays Natural Resource Investments and Third Energy Holdings.

Viking and Third Energy operates conventional gas extraction licenses in – unsurprisingly – North Yorkshire. It is continuing to explore in the region, which is believed to have shale gas reserves, but it is not known if Viking intends to exploit these – or indeed if they will be found.

As part of the UK Onshore Operators group Third Energy welcomed the lifting of the ban on shale gas drilling.

UK based gas exploration company Egdon’s largest shareholder is Premier Oil. Premier are, in turn, owned by a nominee division of JP Morgan Chase which tells us almost nothing at all.

Canadian based oil and gas exploration company which bought the North Yorkshire based Rathlin Energy.

Rathlin is engaged in conventional oil and gas exploration in North Yorkshire and Northern Ireland and there appears to be some disagreement as to whether this exploration will also involve shale gas or coal bed methane.

Ultimately liscenses to explore for oil and gas can be used for any purpose, but whether Connaught intends to bring it’s Canadian expertise in unconventional gas to the UK remains unknown.

Almost entirely owned by a confident businessmen named Gerwyn Williams who has been a director of multiple small UK energy companies.

He’s been quoted saying he thinks there is £120bn worth of gas in his south wales license area.

Describing itself as a ‘diversified clean energy company’ Australian listed Eden Energy claims to be exploring for CBM and shale gas in the UK.

It’s largest shareholder (listed in it’s annual report) is Noble energy limited, as US based oil and gas firm with operations in fracking and deep water drilling.

The mysterious Celtique holds another of the license blocks that encroaches onto the constituency of the  chancellor.

The company is mostly owned by  US based private equity firm, Avista capital partners and a ‘wealthy European family’  who go by the name of ‘the family calmer LP’

Five more firms own shares of 1% or more. Of those two are UK owned and three, Magellen, Perenco and Norwest energy are based outside the UK. It brings the total number of blocks owned by firms with significant foreign investment to over 50%.

A note on the data:

This research has only been possible thanks to the open data policies of the Department of Energy and Climate change and open data projects, such as Duedil. There is more that can be done with the shape files and data linked to this piece, please get in touch if you’d like full access.