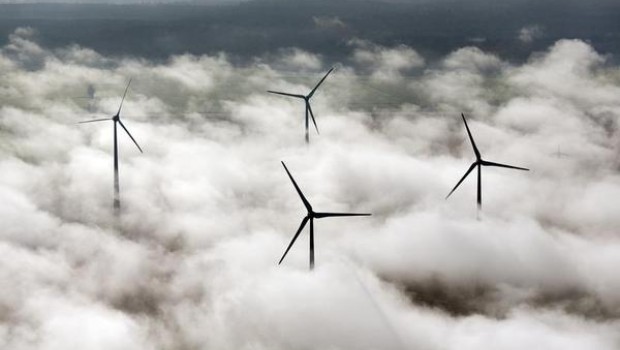 Amid all the news about coal and pollution problems in China you might have missed this one: According to new statistics from the China Electricity Council, China’s wind power production actually increased more than coal power production for the first time ever in 2012.

Thermal power use, which is predominantly coal, grew by only about 0.3 percent in China during 2012, an addition of roughly 12 terawatt hours (TWh) more electricity. In contrast, wind power production expanded by about 26 TWh. This rapid expansion brings the total amount of wind power production in China to 100 TWh, surpassing China’s 98 TWh of nuclear power.

The biggest increase, however, occurred in hydro power, where output grew by 196 TWh, bringing total hydro production to 864 TWh, due favorable conditions for hydro last year and increased hydro capacity. In addition, the growth of power consumption slowed down — in Chinese terms a modest increase of 5.5 percent — influenced by slower economic growth, and possibly the energy use targets for provinces set by the Chinese central government.

Coal still accounts for 79 percent of electricity production in China, but fortunately that dominance is increasingly challenged by competition from cleaner energy, as well as government policies and public concerns about air pollution.

The Chinese government’s 12th five year energy plan (2011-2015) aims for coal to be reduced from 70 percent to 65 percent of energy production by 2015. In contrast, the Chinese government has ambitious targets for wind, solar, and hydro, and plans to increase the share of non-fossil fuels to 30 percent of installed electricity generating capacity by the end of 2015.

Expansion of the coal industry does not have many friends in China anymore. Major increases of coal power in recent years have created not only record climate emissions, but an unprecedented problem of air pollution and water overuse, triggering increased concern among the Chinese urban population and the central government.

The record air pollution in January this year has changed the discussion about coal, and now prominent policymakers and opinion leaders, even vice-ministers, call for capping coal use, especially in the eastern populated and industrial areas of China. The air quality targets the government set for 2016 will require cutting coal pollution.

Already last year the government set new strict standards for coal power emissions, requiring costly investments in filters. This year the government set new water use targets for provinces, which do not give much room for increased use of water for coal use in key provinces. Now the discussion is around controlling the total consumption of coal, in addition to emissions trading and resource taxes. The coal industry is surrounded by challenges.

There is another, very sobering side to the story, though: additions to coal power capacity, even if they have been slowing down in recent years, still stood at 50 GW last year, even more than investments in wind.

So it seems that some of the total coal capacity was not used last year, due to higher coal and transport costs, and increased costs of environmental protection. The economic slowdown, and slowing growth of electricity use, has forced coal to compete with cheaper hydro and even wind.

Companies will push to use that new coal capacity this year, so coal power could see some more growth this year than in 2012, unless there are strong mechanisms to cap the growth.

So while some of the conditions that helped new wind power production pass coal may not repeat this year, it is also clear that the coal industry will continue to be challenged and undermined by clean energy and by China’s new policy priorities to address the air pollution crisis.