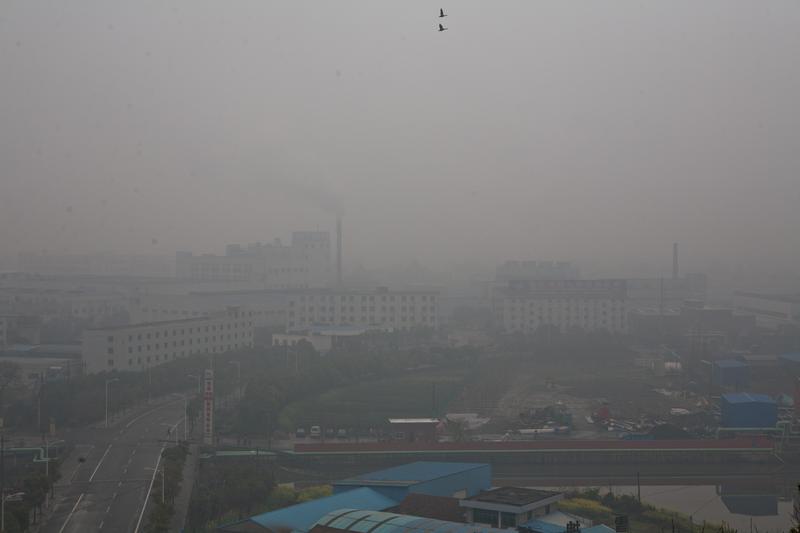 Shanghai, Beijing and other cities in China have been suffering from smogs that hark back to the London pea-soupers of the late 19th and early 20th century.

In fact levels of air pollution in the last twenty four hours went so high they were off the official chart for risk to health and children have been ordered not to go to school.

There is a big concern about the health impacts of air pollution in China – of which the smog is one manifestation. Air pollution can affect respiratory and cardiovascular health and has recently been re-classified by the World Health Organisation’s (WHO) cancer agency The International Agency for Research on Cancer (IARC) as a ‘group 1’ carcinogen, and identified as a leading environmental cause of cancer.

The WHO says chronic exposure to particulate matter in the air, which makes up air pollution, can contribute to the risk of lung cancer, and mortality rates in cities with high levels of pollution are 15-20% more than cleaner cities.

A WHO’s Global Burden of Disease report estimated that 1.2 million people died prematurely in China in 2010 due to air pollution. Research published in the Proceedings of the National Academy of Sciences (PNAS) in July found that air pollution has caused the loss of more than 2.5 billion years of life expectancy in China – shaving 5.5 years off the average life expectancy.

Fine particulate air pollution (PM2.5) caused some 9,900 premature deaths in the Beijing-Tianjin-Hebei region (Jingjinji region) of China in 2011, and almost 70,000 outpatient visits or hospitalizations in 2011, according to research commissioned by Greenpeace China.

Apart from the health risks, there is also the general bad press that smog-filled cities generates, which has been impacting tourism (as well as closing businesses and schools), TIME magazine reports.

China is gunning to host the 2022 Winter Olympics in Beijing – and it almost certainly won’t want a repeat of the smog situation at the 2008 Beijing Olympics. The problem is the smog is worse in the winter months.

Tiny particulate matter made up of a complex mixture of solid and liquid particles suspended in the air, with a diameter of 2.5 micometres or fewer. The main components include: sulphate, nitrates, carbon, mineral dust and water.

PM2.5 is more dangerous than PM10 (10 micrometres in diameter) because it can reach deep inside the lungs when inhaled and enter the bloodstream, according to the WHO. PM10 is more likely to be filtered out by the body’s defences, starting with our nasal hair.

In the past year, levels of PM2.5 in some Chinese cities have reached 40 times the recommended exposure limit set by the WHO, which says the average daily concentrations of PM2.5 should be no more than 25 micrograms per cubic metre.

This autumn, concentrations of PM2.5 were more than 500 micrograms per cubic metre in Harbin, a city in northern China, now they’ve reached that level in Shanghai.

No wonder this year has been slated as the year of ‘airmaggedon’ in China, or ‘airpocalypse’.

How do primary and secondary pollutants give rise to PM?

Primary pollutants can be naturally occurring but usually come from human activities, such as coal burning. Soot (hydrocarbon) is a classic primary pollutant.

But the big problem is how these interact with secondary, or ‘precursor’ pollutants.

These include sulphur dioxide (SO2) and nitrogen oxides (NOx), which are both emitted from the combustion of coal and go on to form aerosols in the atmosphere.

These either condense onto the primary source, such as soot, coating it, or react to form brand-new particles in the atmosphere, many of those new particles are dangerously small. Dominick Spracklen, an atmospheric pollution researcher at the University of Leeds, told Unearthed.

“It’s a complicated mix, and both are important [components of air pollution],” he added.

Shrouds of smog have been descending on Beijing and other major Chinese cities that are so dense they can even been seen from space.

Essentially, the haze is an extreme example of air pollution that builds up over time to dangerous levels. High concentrations of air pollution have been caused by the mass industrialisation of China in the past 5-10 years while controls on air pollution remained lax until recently.

Smog generally consists of a cocktail SO2, NOx, carbon monoxide (CO), ground-level ozone (O3), and fine particulate matter. But the exact composition of China’s smogs are not yet known because the “sources are various and complicated”, China Daily reports.

Old-fashioned smog of the type seen in London in the Industrial Revolution was caused by a reaction of the SO2 emitted from industry and fog (water vapour). When bonded together the two form an aerosol sulphuric acid.

NOx is a key player in of the chemical reaction that results in low-lying ozone (O3) – which makes up photochemical smog. This reaction is helped along by the sun’s rays, and Beijing frequently has high levels of ozone in the Summer.

But Winter also brings severe air pollution to northeast China, with an increase in municipal and household coal burning. Other factors include weather conditions such as a lack of wind and low humidity combined with smoke from burning crop stubble after the yearly harvest.

To top all this off, there is often a temperature inversion that means warm air forms a lid on smog and prevents pollutants dispersing into the upper atmosphere (which is why wind is key to dispersing smog).

Smog can result in several health problems, including bronchitis, reduced lung function, irritation of the eyes, inflammation of the respiratory tract (causing coughing), aggravation of asthma. More people are admitted to hospital with cardiac disease or die on days with high SO2, according to the WHO.

What is China doing about this?

In September, China announced long-awaited plans to curb air pollution – but they are not working yet.

First, its national Airborne Pollution Action Plan [Chinese], which was coveredwidely in global media as well as the state-owned Xinhua news agency] was released by state officials.

The roadmap aims to reduce air pollution in the Beijing-Tianjin-Hebei region by 25%; and China’s two main coal import ports: the Yangtze River Delta by 20% and the Pearl River Delta by 15%.

To meet the national air quality standard of 35 micrograms of PM2.5 per cubed metre with 25% reductions in PM2.5s every five years will take until 2030,according to an analysis by Greenpeace China and the University of Leeds.

The plan has been accompanied by coal use caps in Shandong, Heibei and Beijing, totalling a reduction of 73 million tonnes of coal use by 2017 on 2012 levels. This constitutes a reduction of 2.5% per year of the five year plan for those regions.

The plan not only proposes that coal doesn’t increase it’s share of the energy mix in China – it calls for it to fall by 3% by 2017.The action plan gives each province the power to set goals to reduce coal burning for themselves.

China has also recently launched localised carbon trading schemes to regulate surging emissions from power producers and industry, including ones in the cities of Beijing, Shenzen Shanghai – one set to launch in December in the province of Guandong will be second-largest after the EU’s carbon trading market, according to Reuters