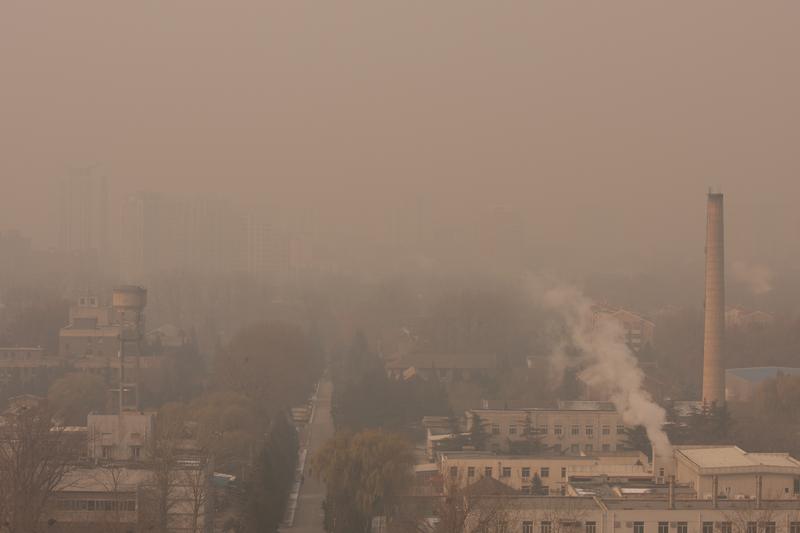 Over the past 24 hours the air in Nottingham has been worse than the air in Beijing – one of the more polluted cities on the planet.

On the same day the UK prime minister, David Cameron, has been ticked off by the European Commission for not understanding science.

Smog is a mix of lots of different elements that mostly come from traffic, industrial and coal plant emissions.

They include sulphur oxides (SOx) and nitrogen oxides (NOx) as well as micro-particles, the most hazardous of which are small enough to enter the bloodstream through the lung – PM 2.5.

The last 24-hour snapshot of Nottingham’s air it had a PM 2.5 reading of 66 – ranked as ‘unhealthy’ on the US Air Quality Index. The last 24-hour reading from Beijing was 23 – or ‘moderate’ according to the index.

Of course the air in Beijing gets much worse than the air in Nottingham ever will, but Nottingham’s air is currently bad enough for the US Air Quality Index to suggest sensitive groups avoid exertion.

Long-term exposure to this kind of pollution can lead to heart disease, strokes, and lung disease, including cancer, according to the World Health Organisation. It can also trigger asthma attacks in the short-term – see our list of the full health impacts further down.

So where does the smog that has hit Nottingham and much of the rest of the UK come from? Well, probably not the Sahara as Mr Cameron seems to think.

If the pollution was from the Sahara you would expect the air quality to be worse closer to the desert – yet this snapshot taken shortly after the Prime Ministers comments suggests that is not the case.

If the Sahara was to blame you would expect pollution to be worse closer to the Sahara – as you can see in the below map the air quality is worst in the UK and not as bad in towards the south (the higher the AQI number the worse it is – and red is bad and green is less bad).

And there is another problem with his hypothesis.

If the pollution came mainly from Saharan dust, studies suggest, you would expect fewer smaller than larger particles. That isn’t the case so even if the larger particles did come from the desert the smaller, more harmful, ones didn’t.

He told the Guardian: “To say this is a temporary issue caused by Saharan dust shows a clear misunderstanding of the air pollution issue.

“It shows that the problem is not yet understood and one of the reasons we’re taking legal action against the UK is that they’ve not met the targets they agreed to. If I was living in the UK then I would not be happy about that.”

So if it isn’t just dust from the Sahara or “a naturally occurring weather phenomenon”, as the prime minister insists – what is it?

The answer might be a little awkward for Hennon, because though the UK is clearly part of the problem – it’s not the whole issue.

The map below tracks the main air routes against pollution centres (in black) including cities full of cars, heavy industry and coal plants.

What’s that? A big vague you say. Ok, here is a more detailed map.

The emissions are from Edgar v4.2 by European Commission Joint Research Centre and the trajectories were modeled using the U.S. NOAA HYSPLIT trajectory model and GDAS meteorological data

What you have is basically all of coal, traffic and industrial pollution from Benelux and France being brought to UK where they have combined with the UK’s own traffic (especially in London) and weather conditions that cause local emissions to accumulate.

The impact of our own coal plants in the North East probably hasn’t helped either, though their impact will be more local, affecting cities like Leeds.