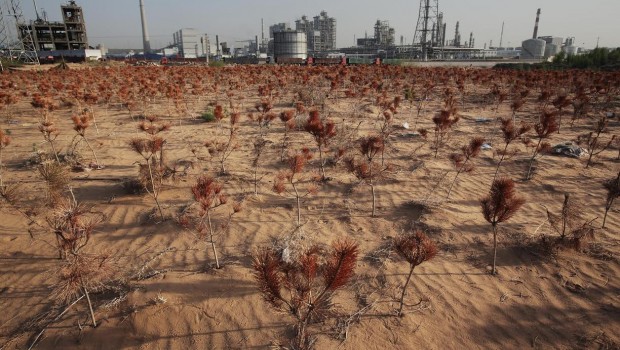 There is a potential storm on the horizon of China’s energy policy: coal-to-gas.

There could be 50 coal-to-gas projects operational within the next decade, producing 225 billion cubic metres of synthetic natural gas [SNG] per year, if all of the planned ones go ahead, according to comprehensive new research by Greenpeace China.

These 50 would emit around 1.087 billion tons of CO2 per year if they are developed, according to the new analysis. To put this in perspective, it is around one eighth of China’s CO2 emissions in 2011 (8.71 billion tons), and much more than the CO2 cuts from coal control measures by 2020 (655 million tons).

If China builds all 50 coal-to-gas plants without carbon capture and storage, and isn’t prevented from doing so by a global climate deal, the world’s largest emitter of CO2 will put out a significant amount of CO2 in the atmosphere.

It will also exceed its own targets set out by the National Energy Administration’s (NEA) for coal-to-gas, which is 50 billion cubic metres of SNG by the end 2020.

This comes as the NEA warns operators against “blind development” of coal-to-gas projects with disregard for the environment, highlighting the need for regulatory approval covering environmental and water standards.

There are only two existing coal-to-gas pilot projects in China currently – Datang’s Inner Mongolia Keqi plant and Qinghua’s Xinjiang plant. Beijing is investing in the Datang plant in a bid to get dispose of their air pollution and get gas in return, but a study by Tsinghua University found this would increase net carbon emissions – as well as coal and water consumption.

There are around 48 in the pipeline. This includes three under construction, 16 that have been given the green light to go ahead, and 11 that have been newly signed between mid-2013 amid new regulations to get the plants approved faster in June this year.

Even if only the plants that are operational, under construction and have been given the green light to go ahead (21 in total – see map above) become operational, Greenpeace projects CO2 emissions of around 0.402 billion tons per year (from 83.3 billion cubic metres of gas). To put that into context, the US’s CO2 reduction target by 2020 is 0.396 tons.

In contrast, NEA’s 2020 target for coal-to-gas is equivalent to around 0.242 billion tons of CO2 per year – hinting at a potential uncontrolled boom in the sector.

These sound like huge amounts of CO2. But how much is it relative to burning the same amount of regular natural gas or your run-of-the-mill coal-firing? Quite a bit, it turns out (and obviously a lot more than clean energy).

In a 2013 paper published in Nature Climate Change researchers from Duke University highlighted that nine newly signed coal-to-gas deals would mean seven times more CO2 emissions than if they were from burning natural gas.

The same study states that when SNG is used to generate electricity its greenhouse gas emissions from the whole process from start to finish are around 36-82% higher than coal power.

A peer-reviewed modelling study in the journal Energy Policy from earlier in 2013 found that life-cycle CO2 emissions are 20-108% higher than coal when SNG is used for cooking, heating, and power generation. The authors concluded that coal-to-gas expansion was not compatible with China’s 2020 carbon reduction targets.

Datang’s Inner Mongolia plant, one of the demonstrator projects, is contracted to provide Beijing with four billion cubic metres of SNG a year – as a result of Beijing having to adhere to a strict coal cap to curb its air pollution problem. This will result in a significant net increase in coal consumption – and thus of CO2 emissions by around 3.77 million tons – according to research by Tsinghua University (Report on China’s Low-carbon Development, 2014 [in Chinese]).

All of this analysis hinges on the fact that carbon capture and storage or carbon capture, use, and storage are at the extremely early stages of development – though the process of turning coal-to-gas is suited to capturing the CO2. It’s just the storage that’s then the issue – both technically and financially.

Much of the reduction in coal consumption in the provinces fighting air pollution (0.118 billion tons) could be offset by increased coal consumption by the coal-to-gas industry(0.103 billion tons) in 2017  – or could even surpass it if the industry overshoots the NEA’s targets, according to the Greenpeace analysis.

Coal-to-gas would therefore be a significant reverse for the biggest coal consumer in the world – its demand for the black stuff has been slightly reducing recently.

Furthermore, China may set an absolute cap on its CO2 emissions from 2016 as a result of severe air pollution, and its health impacts. This would be on top of China’s 2013 National Air Pollution Plan, which resulted in various provinces and cities including Beijing, Tianjin and Hebei committing to coal consumption reduction targets.

Air pollution and water scarcity in the northwest

The need to reduce smog in the eastern part of China has resulted in the idea that coal should be turned to gas in remote regions to the west, such as Inner Mongolia and Xinjiang. Unfortunately this shift has (at least) two consequences: it transfers air pollution to remote communities in northwestern China and sucks up loads of water from what is an already dry and arid region.

Proponents of coal-to-gas tend to argue it reduces air pollution emissions, including the stuff that makes up smog such as sulphur dioxide and nitrogen oxides (NOx).

But researchers at Tsinghua University have warned (Report on China’s Low-carbon Development, 2014 [in Chinese]) that the coal-to-gas technology may not effectively lower the emission of air pollutants such as NOx  – the main contributor to China’s smog problem.

In Xinjiang province, near Qinghua’s Xinjiang pilot coal-to-gas plant, there have been reports of health impacts from air pollution – and protests.

The dean of the Research Institute of Coal Industry Planning and Design, Zhou Tong, commented (in Chinese): “This is a process of pollution transfer which I feel is not rational… It is neither desirable nor feasible to keep yourself clean by piling the garbage at your neighbor’s door.”

Coal-to-gas also results in huge issues for water since it uses a lot of it in its processes. Five to six tonnes of water is needed for each 1,000 cubic metres of SNG produced.

Around 80% of the predicted output of SNG from the 50 plants will come from areas of high or extremely high water risk – areas of high demand or low supply – according to a Greenpeace analysis using a map from World Resources Institute.