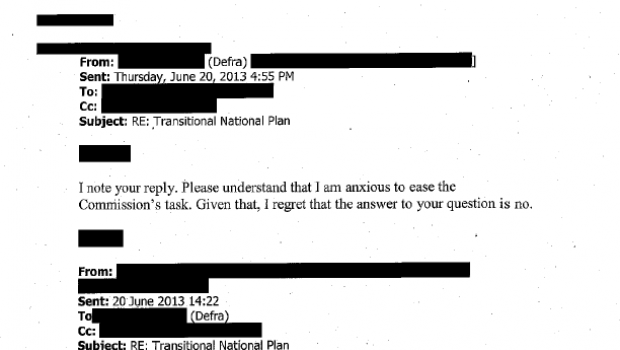 Partially redacted FOIs received by Unearthed suggest the UK has repeatedly failed to provide accurate information to the European Commission (EC) about the emissions of its coal plants, delaying the implementation of air quality rules as it lobbies for old and polluting plants to remain open.

The lobbying focused around RWE’s Aberthaw plant. The plant is one of Europe’s most polluting and leaving it open will significantly increase the amount of pollution the UK is permitted overall.

The batch of emails and documents portray a picture of tortuous negotiations between the EC and member states – especially the UK – over the implementation of EU rules designed to reduce the health risks of gases such as nitrogen oxide.

In April last year, shortly after submitting its “Transitional National Plan” (TNP) to meet EU air quality standards civil servants wrote to the commission to ask for a special meeting to discuss their submission and “some other points”.

But the UK’s plans failed to pass even the “initial screening”.

An EC email complained their consultants AMEC had “already indicated issues of consistency and formatting as regards the UK TNP which need to be resolved” before they could go any further.

June 2013 – Delays and requests to speak

By 3 June the UK has received a formal note from the EC listing two pages of problems with its submission including data gaps, failures in presentation and inconsistencies. It set a deadline of June 28 to sort it out.

The note was followed by a second one which – in the style of a reminder for an overdue bill– reminded civil servants they were already a month late letting the commission know which coal plants wanted to use an opt-out from meeting the new standards, but that would only be able to run limited hours in future.

Around 10 days later the UK replied – twice – offering some clarifications, promising others would be forthcoming and suggesting – again – that they have a sit down.

Dodging the request for a chat the EC replied saying it had identified an error in labelling and had a solution – was its solution correct?

Yes, said a UK official, and “the need for clarifications like this illustrates” why we need to have a chinwag.

But the EC, it seems, didn’t want to talk. It wanted hard data. This stuff is all about spreadsheets and rules, after all.

On 20 June, weeks after raising its initial concerns, it wrote again to the UK asking officials to submit the remaining data – in advance of any meeting.

”Please understand that we need to keep an impartial approach and level playing field” to all countries. Special chats are out then.

Two hours later the reply came. “I note your reply,” wrote a curt UK official, “please understand I am anxious to ease the Commission’s task. Given that, I regret the answer to your question is no”. Not that anxious clearly.

Disappointed by the news that nothing would be forthcoming, EC officials plaintively asked when the UK might, finally, provide the full dataset.

The UK replied they should – by now – have enough to be getting on with. Finally the two sides agreed to meet, over lunch. But that was just the beginning.

What we know beyond June comes mostly from EC documents some available (weirdly) in the Chinese press.

UK and EC officials did meet on the margins of a conference on June 26th.

But that conference didn’t go very well with the EC describing member states’ efforts (including the UK’s) as “unsatisfactory” and “highly disappointing” (see FOIs).

Belatedly the UK submitted further information on 1 July, after the deadline, which provided “most of the missing data”.

But by 10 September, nearly six months after the original submission, the EC and UK still hadn’t reached an agreement. No less than 34 plants had “inconsistent or missing” data and the worst offender was a plant in Aberthaw, Wales.

What was the problem here? Aberthaw has extremely high emissions of nitrogen oxide, which causes respiratory infections. It has already received an exemption from EU air quality rules once, but the commission didn’t think it should do so again. You can read more here.

We can’t say who will win this one. But if Aberthaw does get another opt-out, even if it reduces its emissions, the additional pollution credits issued to it will be usable by other plants in the UK, thus allowing other old coal plants to stay open more cheaply.

Perhaps this was the thing officials simply couldn’t really explain on email.