Communities in conflict: Lignite mining on the Poland-Germany border 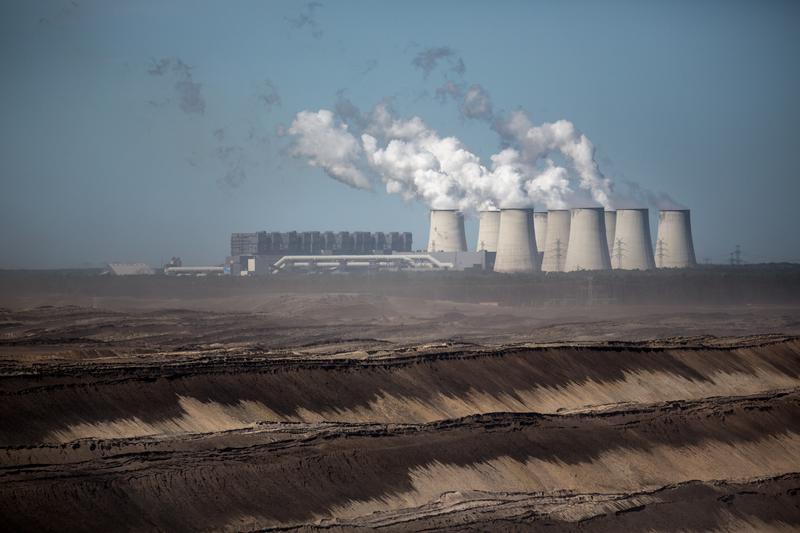 Janina Franczak’s farmhouse in the village of Biecz is surrounded by old red-brick barns and the 79 year old’s immaculately-kept garden. She moved here with her husband in 1954 and the farm houses four generations of the matriarch’s family.

But Biecz, in Western Poland, sits right on the edge of the planned mining area for an opencast lignite or ‘brown coal’ mine and its future is precarious.

“We are not happy. I don’t know how much longer I will be able to live here,” Janina said.

The proposed lignite mines in Lusatia, the central European region that spans Poland’s border with Germany, aim to take advantage of a rich seam of the fossil fuel  – which releases more CO2 than hard coal.

On the Polish side of the border – if the mining plans of Polish partly state-owned energy giant PGE (Polska Grupa Energetyczna) go ahead  – fifteen villages will be completely razed, displacing around 3,000 local people.

Marzena Dera, from Grabice – a village located deep within the boundaries of the pit-to-be – also fears her family will be made homeless or be relocated. She said: “For 18 years we have wanted to buy this farmland from the state, but each year there is a different excuse. The government are only protecting the coal underneath us. We are unlikely to be able to even renew the lease next year.

“We will lose everything we have invested in this place. People are already being made homeless this way, because of the coal.”

Just over the border in Germany, there are already two large lignite mines in the Lusatia region with Swedish-owned Vattenfall planning one more that could displace around 8,000 people.

Local resident Andrea Kappelle fears for the future of the three generations of her family who live in Proschim, a village due to be destroyed by Vattenfall’s expansion plans.

“A year ago we received an offer from the company of €36,000 for our eight square kilometres. We were devastated,” she said, “We have restored historical buildings, we look after a forest on our land. We are self-sustaining on thermal, solar and wind energy – and we put energy back into the grid.”

Proschim, a village of around 350 people, produces enough renewable energy each day for 15,000 people. To destroy the village “for only four months of coal power…is completely senseless”, said Andreas Kappelle, her husband.

Andreas is a doctor in Proschim, and he worries about the health of local people. “I have many patients that work in the coal mines.  Small particulates go into their lungs, but the people don’t want to know.  It’s a problem for later.  For now, it’s more important to have jobs.”

Back in Poland, the forests surrounding Biecz “protect the village from storms”, Janina says.  But the storm the family are weathering today is quite a different one – a public relations onslaught by PGE.

Janina’s granddaughter Anna pulls out a box of leaflets and freebies from PGE: Crayons, lanyards, packs of cards – all bearing the PGE logo, and some given directly to her 10 year-old son. The family also has a ring binder with a three-inch thick pile of pro-coal articles cut from local newspapers. “And this is just from the last year,” Anna said.

Marzena echoed these concerns: “The headmistress of my daughter’s school – it seems she is sponsored by PGE”.

Despite producing so much material, the company seems short on hard details. “Wait, wait, wait. We are just told to wait,” said Anna.

Rumours are circulating that new coal mine employees could earn €40,000 a year – an extraordinary salary for the area – and tensions are running high, with other villagers fearing that the mines will mainly line the pockets of executives in Warsaw.

“The community is divided. There is a war here. There are pro-mining people who are reasonable, but there are also some who are aggressive and even [allegedly] violent against local people who are anti-coal,” according to Marzena (pictured, left, with her 10 year-old daughter).

Pawel Mrowiński from Brody is a local forestry and biodiversity expert who has researched existing mines over the border in Germany. “It will be total devastation [in Poland],” he said.

Pawel was heavily involved in demanding a local referendum in 2009, where nearly three-quarters of the local municipalities Gubin and Brody voted against the approximately 8000-hectare opencast lignite mine.

“Although it should be legally-binding, a lot of people working in the local government don’t want to respect the answer from society,” he said.

They clearly want Pawel to take a step back: “A local minister said to a friend of mine, ‘Do something about that man!’  They want to send me out of the way,” he said, laughing.

Asked what he thinks of Poland’s environmental policy, he said: “It doesn’t exist.  There is no strategy. They’ve known about this coal since the 1960s, but there were no plans to mine it until recently”.

Apart from the danger to local people and the environment, Pawel adds “the whole country will have to pay for this – because of the emissions limits set by the EU”.