Will fracking cut coal use in the UK? 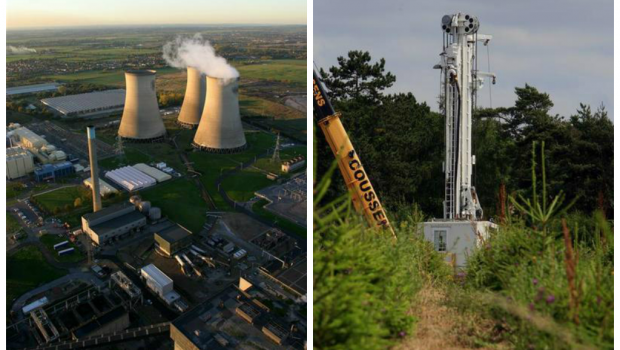 As the UK government continues to push for shale gas exploration and the Lib Dems have pledged to ban unabated coal in a future coalition, it might be tempting to imagine that gas from fracking can could replace more polluting coal in the UK’s energy mix.

UKOOG, the “voice of the UK onshore oil and gas industry” – which seemed to follow this logic – recently tweeted:

Of course, no one can say with complete certainty what’s going to happen since shale gas production hasn’t started in the UK, but there are some problems.

Shale gas would probably replace other gas, not coal

The first issue is that coal is a lot cheaper than gas. Low carbon prices and relatively high gas prices mean that the UK, like the rest of Europe, is burning more coal for power, largely at the expense of gas.

As a result coal often accounts for more than 40% of the UK’s energy mix, especially in the winter, and around 36% of the power mix in 2013. Meanwhile government data shows the UK’s gas plants only ran around 30% of the time in 2012 – mostly during times of peak demand.

Unless the EU carbon market is radically reformed (pushing up the cost of coal power) fracking is unlikely to change the dynamic.

UK and EU shale gas is forecast to be relatively expensive in comparison to conventional gas extraction and US shale gas, according to the IEA and Ernst and Young.

And whilst in the US shale gas is currently only sold domestically – impacting on the price – the UK is part of a wider European gas market. That means it’d take a great deal of gas to move the price enough to compete with coal.

The upshot of this is that shale gas in the UK is more likely to replace conventional or imported gas than coal, which often dominates the energy market as it’s so cheap. If the gas price was cheap enough to rival coal – that may mean shale gas extraction didn’t make economic sense.

Instead, if we’re aiming for a two degrees world, it will be policies such as the Industrial Emissions Directive (in conjunction with other European and domestic policies), that would help push coal off the system. For instance the IED could mean some old coal stations in the UK could come off line by 2023 if they can’t afford to upgrade.

All this is assuming CCS (carbon capture and storage) doesn’t makes great leaps and bounds forward.

Too little gas from fracking to dent coal

If we fail to limit climate change to two degrees, emissions policies don’t work, and the relative costs of coal and gas don’t behave in the ways they are expected to, there could be the rather large issue that that there probably won’t be enough shale gas generated in the UK to fully – or even partially – dislodge coal.

Across Europe shale gas could make up around 3-18% of EU gas demand by 2030 (or 21% of UK only demand) -according to energy consultants Poyry.

If all of that were used for power generation (21bcm or 231twh) it would be sufficient to meet current UK power demand from gas (DUKES) but little more. As mentioned before, coal has recently peaked at around 40% of UK’s energy mix.

Of course, we could ge far more – or less. According to environmental think tank E3G we should be looking at the lower end of projections on European shale gas supply as a whole.

They noted: “Even under the most optimistic scenarios, shale gas is projected to meet just 10% of European gas demand by 2030. Most commentators agree that 2-3% by 2030 is a more realistic estimate.”

But even if we should be looking at the top end of that rather large range of how much shale gas we could have in the UK by 2030, there could be concerns around when the shale gas will come online.

A 2013 study by energy consultants Poyry suggests shale gas would start to come onstream in Europe in around a decade.

It also argues that a European shale gas boom could shift a significant amount of coal off the system by 2035, and says: “The production of shale gas in Europe does not affect the growth of renewables under either shale gas scenario, but it does reduce coal burn in electricity generation.”

But their analysis assumes that there is still plenty of coal to push off the system by the first third and and middle of this century. This is in direct contrast to the advice of the UK government advisors on climate change (the Committee on Climate Change), who say we really need phase out coal quick smart – by the early 2020s  – to stay within two degrees of global warming, after which the impacts become increasingly severe.

Of course, all of this is based on assumptions about shale gas production and economics from just a few wells.

It could be the UK is indeed flooded with cheap gas over the next few years, overwhelming the European market and triggering a market led shift from coal to gas. It could happen – but based on the evidence that we currently have, it doesn’t seem especially plausible.