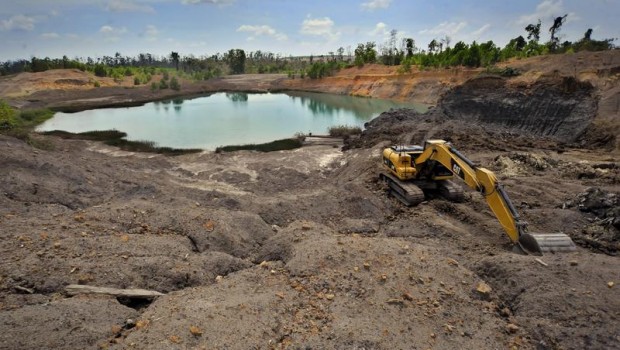 Indonesia may be famous for its orangutans and its virgin forests – but it is also the world’s largest thermal coal exporter, with thousands of coal mines pitting the landscape.

Our field investigation into the country’s booming coal mining sector has found several large coal mines in Indonesia’s South Kalimantan province have been discharging hazardous polluted water into the environment.

Samples taken from coal mining waste water sites in South Kalimantan and analysed by the University of Exeter revealed high levels of toxic, acidic water, which if it leaks into the local surroundings could contaminate drinking and bathing water, and put farming and fishing yields at risk.

Of 29 samples taken, 22 had dangerously low pHs of below 6, the legal limit for waste water from coal mining according to Indonesian law. 18 of the samples had very acidic pHs of below 4. See the pHs of the different samples on the map below.

The samples were all taken this summer on the sites of five coal concessions running in South Kalimantan, which is one of the areas most impacted by Indonesia’s coal boom of since the turn of the century.

About 1 million hectares of South Kalimantan’s overall 3.7 Mha are allocated to coal mining concessions – not including illegal mines.

Acidic water, sometimes contaminated with heavy metals, was observed leaking into nearby streams, swamps with dead trees, and rivers by Greenpeace field investigators.

The most severe case of acidic water was found when taking several samples at the Arutmin mining concession in the tip of Kalimantan island in Asam Asam. Owned by Indonesia’s largest coal company Bumi, the Arutmin mine waste water samples had pHs of 2.3 to 3.6.

Toxic pools of water overflowing and leaking into the wider water system, including nearby streams and swamps were recorded by the investigators – with the risk of discharge into rivers, and potentially affecting the health of villagers living nearby.

A little further north, Tanjung Alam Jaya, a  state-owned coal-mining firm, has a concession, which discharged acidic water (pH 3.7) into a stream running alongside a farm – the water is also used for drinking and bathing.

And although the field investigators were unable to reach the large abandoned coal mine pit on coal mining company Banpu’s concession – acid water outflow from the pit is visible right next to it on drone footage (see below video).

Acid run-off from coal mine pits

‘Acid mine drainage’ from surface coal mines is a well-studied phenomenon in which run-off from coal mines have high concentrations of acid and heavy metals. This happens when exposed rocks containing pyrite, an iron sulphide, reacts with air and water to form sulphuric acid and dissolved iron – and the acid runoff can dissolve heavy metals such as copper into the water.

The dissolved iron accounts for the yellow to red colour of the runoff.

Instances of acid mine drainage can result in contaminated drinking water, reduced fishery yields, skin disease, and decrease in food yields from farming.

In 2013 a government water quality survey showed the rapid expansion of coal mines over the previous 15 years in South Kalimantan had contributed towards the poor quality of rivers in the region.

At the time, the companies involved were given warnings, including Tanjung Alam Jaya, but some of them were found in the small snapshot from the investigation to be continuing to break environmental laws.

Access to a wider sampling was restricted by security threats, limited access and the time constraints of the study.

But to give an idea of the scope of the risk to water pollution from South Kalimantan coal mining operations – around 3,000km of rivers in the region (45% of them) are downstream from coal mines. (See below map with the rivers at risk in red, with the orange areas of coal mining and light orange potential coal mining.)

And Indonesia is projected to only ramp up its coal production by 4.8% a year to 2020 to satisfy demand mainly from Asia, according to the IEA. The biggest importer of Indonesian coal is China.

Compounding the problem of the fact environmental regulations are not properly enforced by local governments, there is also the growing proliferation of small-scale, illegal coal mining in the area, and there are reportedly issues with the overlap of concessions.

Digging for coal in the forest

Coal mining is the third largest identified cause of deforestation in Kalimantan, and Indonesia as a whole – which hand-in-hand with deforestation for palm oil and pulp, means Indonesia is now the world’s third biggest emitter of greenhouse gases, after the US and China.

According to estimates drawn from Greenpeace mapping (see map below) one quarter of total deforestation in Kalimantan as a whole between 2009 and 2011 is attributable to coal, contributing between 0.13 to 0.44 Mha of forest cut down.

Around 3.45Mha of forest were designated as coal mining concessions in 2011 in Kalimantan – though the whole concession area is rarely de-forested in practice acid runoff can damage nearby forests.

Over half (58%) of secondary (re-grown) dryland forest in the South Kalimantan is threatened by mining, according to the analysis – shown as bright green in the map below, with mining in orange.

It is difficult to know, however, exactly how coal mining has impacted forests in the region as there is no reliable study on the loss of forest ecosystems from coal mining.

Likewise, no comprehensive studies have been done on the impact of coal mining on orangutans.

Ape conservation charity Arcus Foundation reports that the biggest risks to orangutans from coal mining are in East Kalimantan, where there is significant overlap with orangutan habitat. Some 15% of orangutan habitat in Kalimantan is allocated to mining, they estimate.