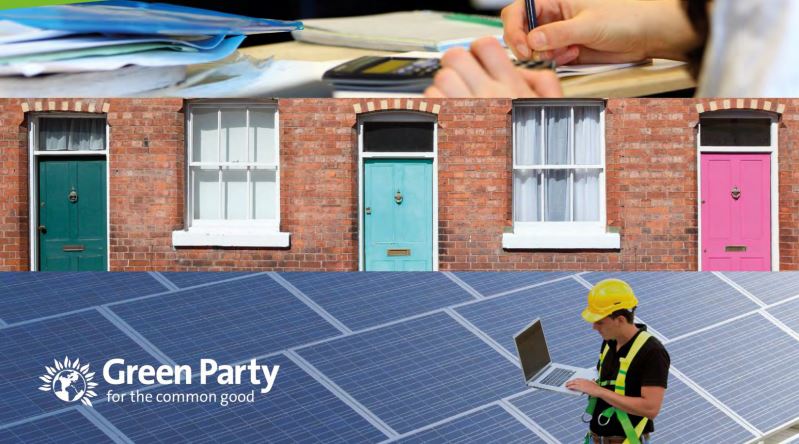 The Green Party launched their manifesto this morning promising an end to “business as usual politics”, a slogan they share with a number of smaller parties.

Unsurprisingly perhaps the party placed green and environmental issues at the heart of the document. But what about energy and climate change specifically? Well here’s all you need to know:

1) Their emphasis is on a renewable future…

The theme of building a renewable future runs throughout the manifesto. In the next 15-20 years the Greens hope to create an energy system based mainly on electricity from renewables.

To do this they’re proposing massive investments – up to £35 billion over the parliament – in renewable generation though they don’t appear to envisage a major increase in energy bills to fund it.

Part of the solution they put forward is to cut costs.

They want to concentrate on expanding mature renewable technologies, such as wind and solar, in the period until 2030 – and bringing down costs through changes to planning.

The Greens also plan to give the Green Investment Bank full borrowing powers to help fund investment in renewable energy and improvements in energy efficiency for homes (much more on this latter point below).

A number of policies to facilitate are laid out in the document.

They include setting a target of at least 42 gigawatts (GW) of community power by 2020, requiring grid operators to give priority access to community energy and supporting long term stable fixed-price feed in tariffs for renewable energy generators.

3) They want an end to fuel poverty, mainly by improving home energy efficiency

They frame their drive for a green renewable future as both an environmental and social justice issue, with the party calling for an end to “heat or eat”.

To achieve this the are placing home energy improvement at the centre of their drive to tackle fuel poverty and improve energy efficiency. Their proposal to insulate 9 million homes is predicted to lift 2 million homes out of fuel poverty by 2020.

The policy offers up to £5000 of free insulation or other energy improvements for households with the aim of reducing energy prices, tackling climate change and creating 100,000 jobs.

This is a key concern for the party’s first MP, Caroline Lucas, who chaired the cross-party group on the issue, and – unsurprisingly – it featured heavily in the manifesto launch.

Tackling climate change is one of the Green’s other overarching themes – and this manifesto proposes some ambitious targets.

The party want to go further than the UK Climate Change Act targets by reducing greenhouse gas emissions by 90% over the next 15-20 years (the Act wants 50% by 2050).

The idea is that the UK’s CO2 emissions would reach 80 million tonnes a year by 2030 falling further thereafter. This would mean a target of reducing emissions from gas (for example for home heating) to 10% of their 1990 levels by 2030.

That’s a lot of homes going off gas central heating.

Their manifesto pledges to give an extra £1 billion a year to local authorities and the Environment Agency for flood defences and protection against heatwaves.

They’ll also prevent new building on flood plains and compel all government departments and local authorities to consider climate change and carbon reduction in all their planning.

6) No fracking, no nuclear, no coal

With the party placing such heavy emphasis on renewables and combating climate change, it’s not surprising that the party are opposing fracking.

The party have used their manifesto to make an “emphatic and unambiguous” calling for an outright ban on fracking and withdraw all relevant licences as soon as possible. Alongside this they’ll ban other extreme energy technologies such as coal-bed methane and underground coal gasification.

The manifesto also makes a strong commitment to phasing out nuclear power within 10 years and fossil fuel-based generation – including coal-fired power fires stations – by 2023 at the latest.