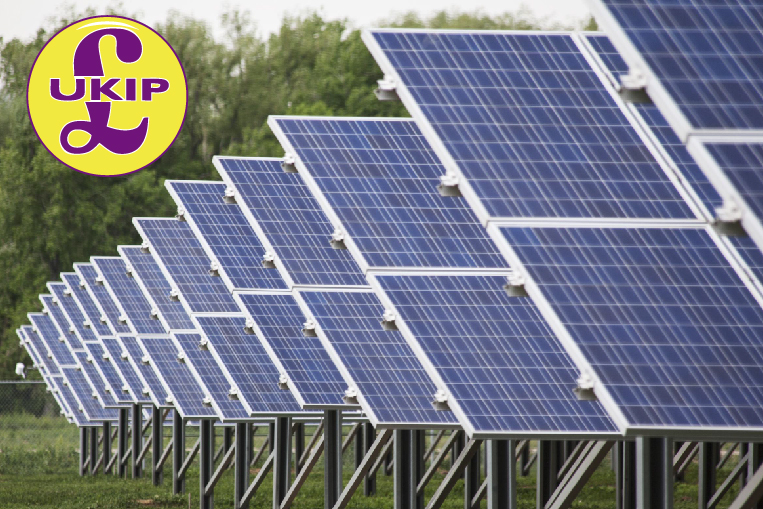 Hot on the heels of the Lib Dems, Ukip launched their Manifesto this morning in Thurrock. The event was billed by many as a crucial moment for the party’s credibility and it’s clear Ukip are keen to move away from their image as a single issue party.

So just how does their manifesto tackle the twin issues of energy and climate change?

In what reads like some sort of climate change sceptic’s fantasy, Ukip say that – if elected – they would rock up into Westminster and do away with an entire government department and undo a major piece of legislation.

The Climate Change Act, they claim, is doing “untold damage” — it’s rooted in “EU folly” and messes with the British economy.

They say it’s been dubbed ‘the most expensive piece of legislation in British history’ but a cursory Google search suggests that only notorious climate change sceptic Christopher Booker calls it that.

And only when talking about the things it would get rid of.

Withdrawing from the EU’s ETS will stop nearly £10 billion from being added to energy bills by 2020, saving the average fuel bill just under £200. They’d also scrap green taxes.

4. Time to get fracking

But Ukip seriously supports fracking. They say in their manifesto that the prospect of home-grown shale gas is “an enormous opportunity which would be irresponsible to ignore”.

Like the Tories, they want to use profits from the industry to set up a sovereign wealth fund.

5. Coal is the future — and they’ll make sure of that

Roger Helmer, the Ukip spokesman on energy and climate change, has previously argued “fossil fuels are the future”, and the party promises it will preserve the coal sector.

First they’ll set up a commission to investigate how to assist and rejuvenate the industry, then they’ll do everything possible to expand deep, open-cast and drift mining.

6. Kill the carbon floor tax and bank on CCS

Ukip wants the to do away with the carbon floor tax on the basis that production for coal-fired stations is combined with carbon capture and storage technology (which isn’t yet a commercially viable thing).

In order to “create a level playing field for coal”, Ukip wants to end pesky government subsidies for clean energies.

Kind of like the Tories, they say they’ll invest in renewables — but only if the price is right.

According to their manifesto, only hydro power meets this *totally legitimate* affordability test.

8. Because wind turbines are so ugly

Ukip don’t dislike solar, seeing it as part of a “diverse energy market”, but they really hate those landscape-blighting wind turbines.

Again sort of like the Tories, they want to want communities to kill onshore wind.

Local referendums on planning decisions involving wind and solar would be held, the results of which would be binding.

You can tell they’re looking at the bigger picture.