China coal use falls: How the world’s largest polluter reduced its emissions 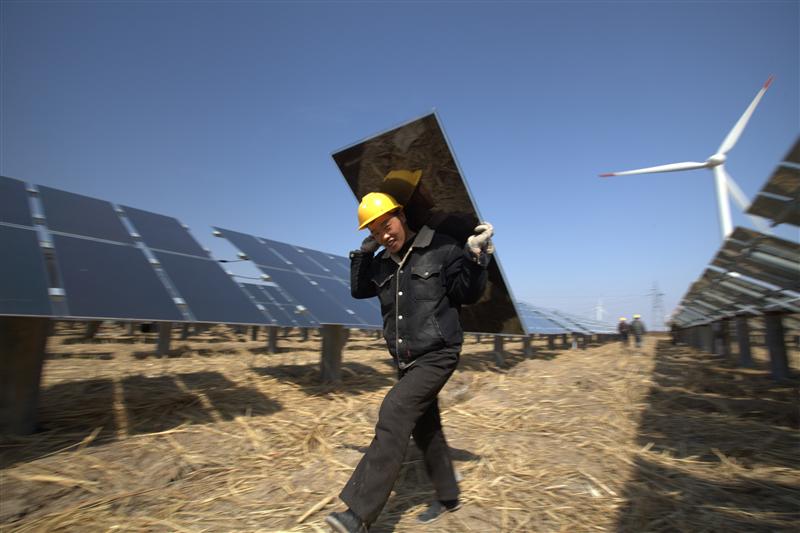 Earlier this week Unearthed revealed that China’s coal use has fallen by nearly 8% so far this year — taking CO2 emissions down 5% with it.

China’s industrial output numbers for the first four months of 2015 shows the size of the shift from high-CO2 to cleaner forms of industrial production.

While industrial value added actually grew 6% from January to April, coal output fell by 6.1% and power generation from coal, gas and other thermal plants fell by 3.5%.

Cement output fell by 4.8% and crude steel output by 1.3%, while higher value industries such as electronics and chemicals maintained high growth.

The data suggests China’s industrial and economic structure is undergoing not just a temporary slowdown but a rapid overhaul, profoundly changing the outlook for CO2 emissions (and the coal industry).

At the same time as industrial output is becoming less carbon intensive, energy production from low-carbon sources is increasing.

Most of the added generation continues to come from hydropower.

China’s massive hydro projects – including the Three Gorges Dam, the world’s largest – have come under fire for poor environmental oversight that may have caused droughts and geologic disasters. It has also been alleged that the Chinese state has displaced millions of residents to make room for these projects.

But the significant growth rates of wind, solar, bioenergy and gas suggest that these energy sources could pick up much of the slack once hydropower’s potential is exhausted.

A recent projection by a Chinese government think tank sees the country getting half of its electricity from renewable energy in 15 years, and almost phasing out fossil fuels in power generation by mid-century.

Under these projections China in 2050 would produce half of the current electricity consumption of the entire world from wind and solar alone, or more than twice as much as as China currently does from coal.

Why is coal use falling?

Most of the reduction in coal consumption in 2014 took place in the power sector and we already have a pretty detailed picture of what happened there, a break between GDP and electricity generation and a switch from fossil generation to gas and non-fossil fuel power, along with ongoing improvements in power plant efficiency. 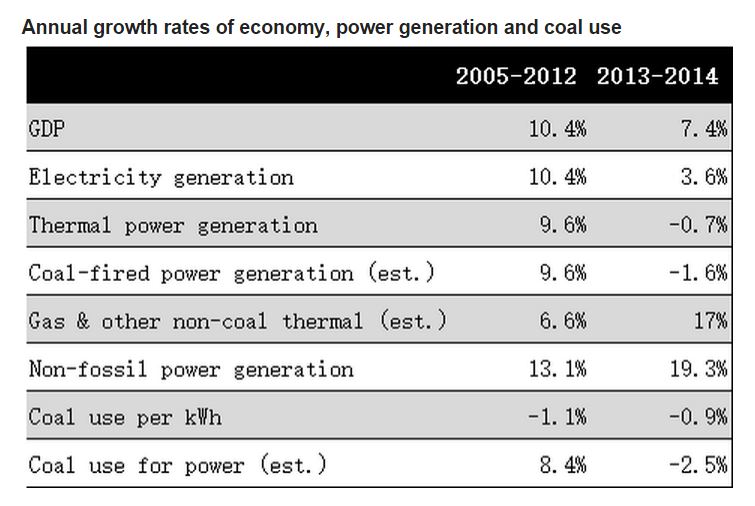 Annual growth rates of economy, power generation and coal use

Based on that, here’s a breakdown of the relative importance of different factors from GDP growth to non-fossil fuel generation in slowing China’s coal use.

And here is the breakdown of the growth in non-coal power generation.

Why this changes everything for the climate

Over the past decade, until 2013, China’s skyrocketing coal consumption dominated global CO2 emission trends, being responsible for more than half of total growth.

The trend only accentuated in 2010-2013, pushing global CO2 emissions and CO2 levels already in the atmosphere to ever more dangerous levels and making the task of peaking and declining global emissions very urgent.

With the prospect of very slow growth or even continued reductions in China’s CO2 emissions, the chances of achieving a peak have changed from near-impossible to achievable with some determination.

Furthermore, with the Paris climate talks in December and China’s new five-year plan due early next year, the complete turnaround in China’s CO2 emission trends could not come at a more politically sensitive time.

Quite unexpectedly, emissions peak is now possible but only if industrialized countries accelerate the emission reductions emerging country leaders to find ways to grow with less CO2, and if Chinese leaders ensure the changes to the economy and power infrastructure are consolidated as they draw up the 13th five year plan.