Data: Three key things from BP’s energy stats they spun out of all recognition 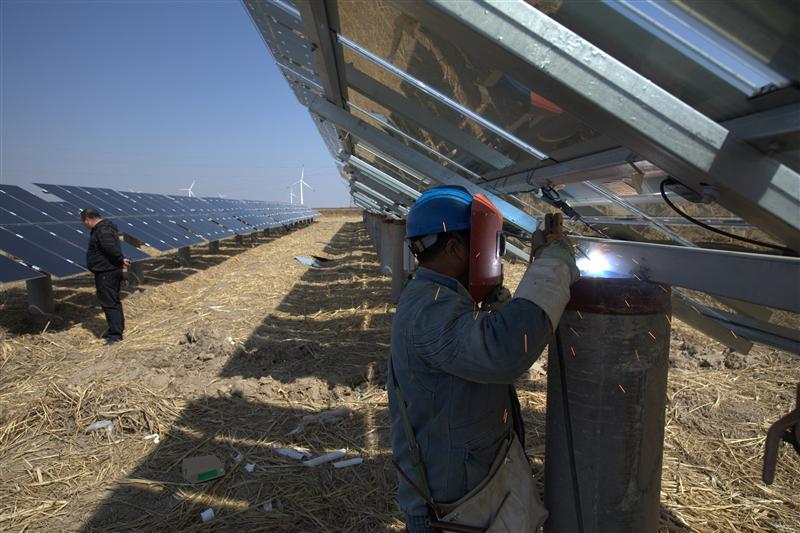 It is worth bearing in mind when you read the BP Statistical Review of World Energy 2015 that BP, along with other oil majors, say they want to help on carbon emissions whilst simultaneously basing their business on scenarios which envisage serious levels of global warming.

This doesn’t mean BP’s statistics on energy in 2014 are necessarily wrong. But even in the week G7 leaders re-affirmed their commitment to limit climate change to non-catastrophic levels (less than 2 degrees of warming), the stats were delivered with a degree of spin which appeared to assume the world wouldn’t get off coal, oil and gas anytime too soon.

Which is odd – because the data doesn’t really point in the direction of the spin. Here are three key take-aways.

1) China coal use is just barely growing any more

BP chief economist Spencer Dale said: China’s stalled coal consumption is the most striking thing about the BP statistics. But he questioned whether coal consumption would rebound, saying the structural reasons that caused the “pause” in coal use were economic slowdown and an economic rebalancing affecting the energy intensive industries including steel.  He said “the extent of the slowdown in 2014 also reflected a number of one-off and erratic factors that are unlikely to be repeated and may even get partially reversed.”

China’s coal production is down by 2.6% and coal consumption is marginally up by 0.1%. This rate of coal use is China’s lowest since 1998. 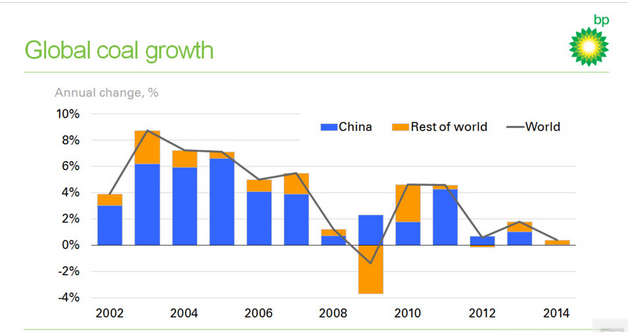 According to official Chinese statistics released in February, the picture looks even clearer with Chinese coal consumption actually falling by 2.9% in 2014.

Dale failed to mention that air pollution – and regulations to control it including shutting down coal plants – also appear play a large part of the reason why China’s coal consumption has stalled. China is also investing heavily in renewables and nuclear.

Dale said: Global carbon emissions from energy are growing at the “slowest rate for 15 years”. But he also highlighted that BP forecast fossil fuels to be two thirds of the global energy mix (he didn’t mention when), and remain the dominant fuel. Compare that to the IEA’s 450 scenario – where we have a 50% chance of avoiding the worst effects of climate change – and where renewables are the dominant fuel by 2040.

Okay, so global carbon emissions didn’t fall in 2014, but their rate of growth was only 0.5% (187 MtCO2) on the previous year. This constitutes the slowest rate of growth since 1998 (apart from immediately after the recession). 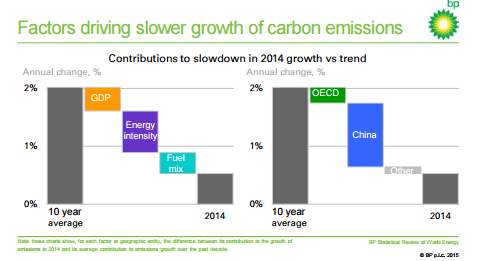 China is the world’s biggest driver of CO2 emissions, and we’ve already seen its coal use is stalled. Other important reasons for the emissions slowdown are improvements in energy intensity (mainly caused by changes to China’s economy away from energy-intensive industry) and a decarbonisation of the energy mix – slower growth in coal and fast growth of renewables.

Dale said: He was a bit equivocal about renewables, calling it a ‘half-full’ or ‘half empty’ story. He said solar was growing at breakneck speed. And then he was a bit pessimistic, saying BP don’t expect to see a huge increase in the proportion of renewables in the mix. Well, no, not if you expect global warming to accelerate dramatically.

The growth in renewables, including biofuels, was almost a third of the total increase in energy in 2014 and provided 40% of the increase in power generation – making renewables the fastest growing energy sector. 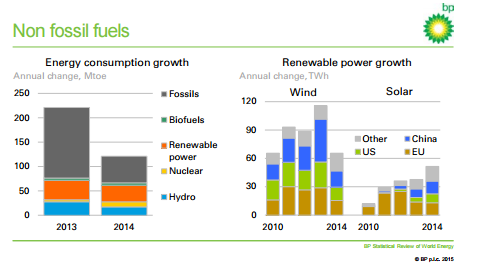 Renewable energy consumption grew by 12% in 2014 – but this is below the 10-year average of 15.4%, driven by a slowdown in the wind sector, globally. Renewables generated 6% of the world’s power but provided only 3% of energy use.