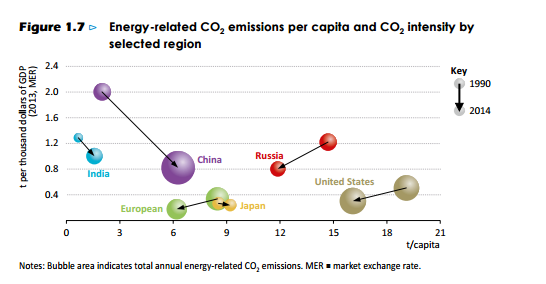 The Paris-based rich nations’ energy think tank, the International Energy Agency (IEA) has published its latest assessment of how the world could go about giving itself a 50% chance of avoiding the more catastrophic consequences of global warming (more than 2 degrees).

The briefing is seen as particularly important ahead of a global summit in Paris at the end of year where – again – there are hopes of a deal on tackling climate change. The top-lines were fairly clear. The IEA says emissions are no longer rising with growth, that current national promises are significant but not yet not enough to avoid catastrophic climate change but that countries could agree to review them every five years.

In the meantime – it says – they could adopt a “bridge scenario” which wouldn’t actually avoid floods, droughts etc but could act as a ‘bridge’ to more serious action at an unspecified later date. As ever though, the devil is in the detail – so here they are in the IEA’s own words and charts.

“Demand for coal, which has seen extraordinary growth in China in recent decades, declined by around 3%, an outcome that is partly cyclical and partly structural.

“On the one hand, there was tremendous growth in hydropower generation in 2014 (22%), mainly due to a particularly wet year. On the other hand, power generation from wind and solar increased by 34% and demand for natural gas grew by 9%, both suggesting demand for coal may be suppressed on a more sustained basis.

“Overall, low-carbon forms of power generation accounted for one-quarter of China’s electricity supply in 2014, up from around one-fifth in 2013. In parallel, there are signs that economic growth in the future will be dominated by consumption, particularly for services, rather than investment in energy intensive industries, which characterised the picture in the past.” 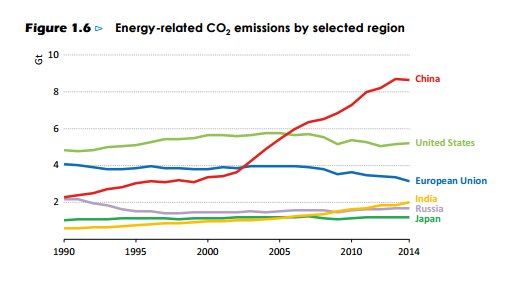 2. Which means global emissions were flat for the first time in 40 years as wind and solar power soared

“The global economy grew by around 3% in 2014 but energy-related carbon dioxide (CO2) emissions stayed flat, the first time in at least 40 years that such an outcome has occurred outside economic crisis.  It’s too early to say whether this is the start of a long term trend.”

Renewables accounted for nearly half of all new power generation capacity in 2014, led by growth in China, the United States, Japan and Germany, with investment remaining strong (at $270 billion) and costs continuing to fall.

The energy intensity of the global economy dropped by 2.3% in 2014, more than double the average rate of fall over the last decade, a result stemming from improved energy efficiency.  The drop was 8% in China.” 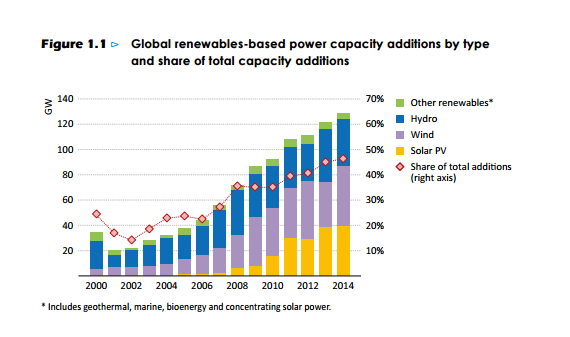 The IEA says current commitments are a good start to cutting emissions seeing renewables become the leading source of electricity by 2030.

“The United States’ pledge to cut net greenhouse-gas emissions by 26% to 28% by 2025 (relative to 2005 levels) would deliver a major reduction in emissions while the economy grows by more than one-third over current levels.

The European Union’s pledge to cut GHG emissions by at least 40% by 2030 (relative to 1990 levels) would see energy-related CO2 emissions decline at nearly twice the rate achieved since 2000, making it one of the world’s least carbon-intensive energy economies.

Renewables become the leading source of electricity by 2030, as average annual investment in nonhydro renewables is 80% higher than levels seen since 2000, but inefficient coal-fired power generation capacity declines only slightly.”

But the analysis – which doesn’t include China’s commitment and so is somewhat lacking – suggests the current pledges alone won’t prevent catastrophic climate change.

“The world’s estimated remaining carbon budget consistent with a 50% chance of keeping the rise in temperature below 2 °C is consumed by around 2040 – eight months later than is projected in the absence of INDCs (Intended Nationally Determined Contributions).

If stronger action is not forthcoming after 2030, the path in the INDC Scenario would be consistent with an average temperature increase of around 2.6 °C by 2100 and 3.5 °C after 2200.”

For example, in India:

“In the INDC Scenario, which reflects these policy intentions, the major push on renewables helps to diversify India’s energy supply. However, at a time of high demand growth, this by no means eliminates fossil fuels from the energy mix. Coal still accounts for 40% of India’s energy mix in 2022 (44% in 2013), and all fossil fuels together provide three-quarters of total energy demand (the traditional use of bioenergy being the next largest component.”

4. Efficiency and coal limits could peak emissions by 2020

“Bridge Scenario is essential to secure the long term decarbonisation of the energy sector and their near-term adoption can help keep the door to the 2 °C goal open.”

“Increasing energy efficiency in the industry, buildings and transport sectors. Progressively reducing the use of the least-efficient coal-fired power plants and banning their construction. Increasing investment in renewable energy technologies in the power sector from $270 billion in 2014 to $400 billion in 2030.Gradual phasing out of fossil-fuel subsidies to end-users by 2030. Reducing methane emissions in oil and gas production.”

“The Bridge Scenario puts a brake on growth in oil and coal use within the next five years: oil demand rises to 95 mb/d by around 2020 and then plateaus, while coal demand peaks before 2020. The shift towards renewables increases their share in power generation to 37% in 2030, 6 percentage points above that in the INDC Scenario.”

And also cuts bills to consumers whilst rolling out power to (nearly) all:

“While universal access to modern energy is not achieved in the Bridge Scenario, the efforts to reduce energy related emissions do go hand-in-hand with delivering access to electricity to 1.7 billion people and access to clean cookstoves to 1.6 billion people by 2030.” 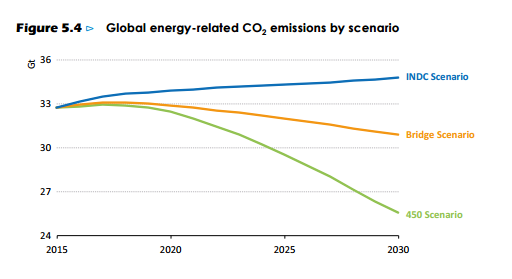 In the very long term, gas-fired power generation will also be incompatible unless measures are taken to abate their CO2 emissions.”

5. But to limit climate change you need lots of renewables

In the IEA’s 2 degrees scenario:

The think tank is also very keen on carbon capture and storage:

“CCS technologies are vital to decarbonising the power supply and industry in the 450 Scenario, capturing 52 Gt CO2 from 2015 to 2040, of which 5.1 Gt CO2 is in 2040. The fuel consumption by CCS-equipped facilities creates revenues of $1.3 trillion for both coal and gas producers respectively from 2015 to 2040.

But even with this, coal use falls dramatically, everywhere:

“In the 450 Scenario, coal-fired capacity in China falls by 30% percent by 2040 despite the widespread adoption of CCS (Figure 4.5). Along with about 50 GW of new builds with CCS, about 280 GW of coal-fired power plants are retrofitted with CCS by 2040 in the 450 Scenario. Without these retrofits, which can be a relatively low-cost CO2 abatement option in the power sector, many more large power plants would face closure before the end of their technical lifetime.”