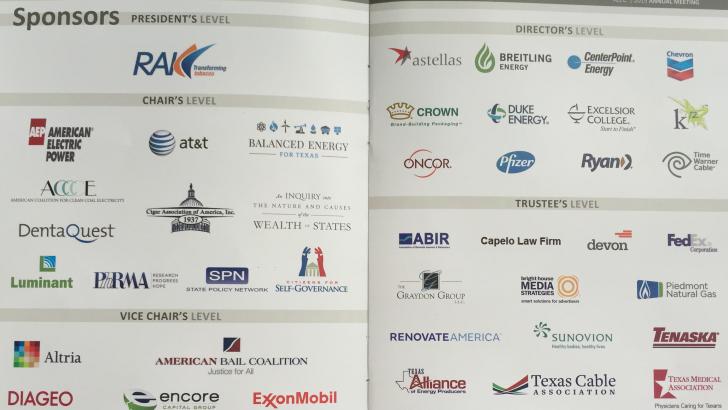 This is an edited version of an article cross-posted from PR Watch.

Fossil fuel energy companies and their supporters – including ExxonMobil, Chevron, and Duke Energy – continue to dominate the funding of Conservative lobby group American Legislative Exchange Council‘s (ALEC ) annual meeting, according to a list of conference sponsors obtained jointly by the Center for Media and Democracy and Greenpeace.

Hundreds of corporate lobbyists and US state and national politicians have been attending the closed door meeting in San Diego this week – no journalists are allowed to attend.

ALEC’s sessions at recent conferences have repeatedly featured the overt denial of climate change science – despite ALEC roundly denying it is a climate change denial lobby group.

After Google chairman Eric Schmidt accused ALEC of “literally lying” about climate change on NPR in September 2014, a fleet of companies ditched ALEC. These include oil giants like BP and Occidental Petroleum; and software and tech firms like Facebook, Yelp, Yahoo, AOL, eBay, and SAP – the company which chaired ALEC’s corporate board.

But a bunch of other companies still actively support the group.

Of the 54 identified corporate sponsors of the annual meeting, 22 are energy related firms, their front groups, or firms representing energy interests. Sponsorship rates, from another document obtained by CMD, range from $5,000 to $100,000 – putting energy-related firms’ sponsorship at around $440,000.

ExxonMobil is among the top sponsors of ALEC’s 2015 annual meeting, and Exxon’s Cynthia Bergman remains on ALEC’s corporate board – even though the firm last week told the Guardian that it isn’t sponsoring climate change denial groups, including ALEC specifically.

Other firms sponsoring the event, held at of the largest resorts on the West Coast, include Chevron, Duke Energy and several Texas-based energy firms (the sponsors are listed in full at the bottom of the article).

The corporations and amounts listed here are just part of the funding picture for the group. These amounts do not include other money corporations pay ALEC in membership fees, or additional fees to participate on ALEC task forces, for which lobbyists receive a seat and a vote alongside legislators in setting the ALEC agenda.

It also does not include money spent by corporate lobbyists at special parties for lawmakers or state delegations at some of the most expensive restaurants in San Diego, nor money spent by some of the corporations to fund the trips for state lawmakers to San Diego for what ALEC has dubbed “scholarships.”

On the agenda during the San Diego meeting of the ALEC Energy, Environment and Agriculture task force are numerous new attempts to undermine efforts to tackle climate change – mainly through opposing environmental regulations meant to limit carbon emissions.

Top of the line-up at the meeting was a speech by Wisconsin Governor Scott Walker to ALEC delegates on Thursday. Walker is campaigning on a promise to destroy the Environmental Protection Agency (EPA) if elected President in 2016 – a plan which was earlier debated by ALEC at its December 2014 conference and is in line with ALEC’s long-term legislative agenda.

At ALEC conferences and meetings, rhetoric against the EPA – and in particular the Obama administration’s proposed Clean Power Plan to reduce carbon pollution – is frequently fierce.

During recent ALEC conferences, legislators have been called upon to engage in “guerrilla warfare” against the EPA and at another session instructed to bring about a “political tsunami” to block pollution controls.

The group proposes its model “Environmental Impact Litigation Act,” based on a law passed in North Dakota in 2015, which would allow coal, oil, and gas companies to pay into a fund for the state to sue against a number of key federal environmental laws, including the Clean Air Act.

This law, if passed, could be used to allow coal companies to fund state lawsuits against the Clean Power Plan.

Below are financial underwriters of ALEC’s meeting and the amount of their donation, ranging from $5,000 to $100,000. Fossil fuel energy interests & front groups are highlighted in bold, while asterisks indicate membership on ALEC’s corporate board of directors.

For the full page of corporate logos sponsoring the ALEC conference see here.

Nick Surgey is the director of research for The Center for Media and Democracy and Connor Gibson is researcher for Greenpeace US.