Interview: The Yes Men – taking on the oil giants with humour 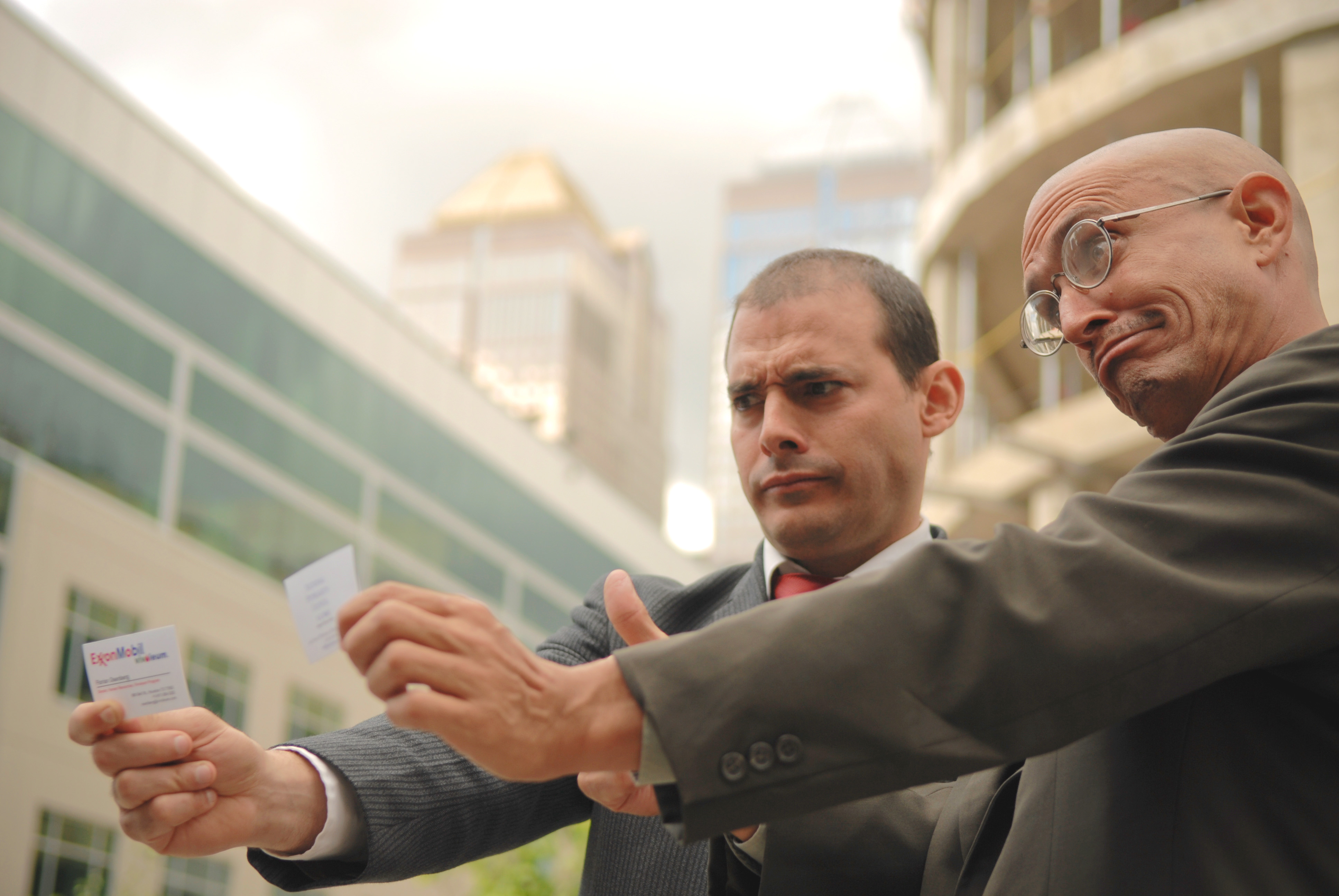 “Do any of us know who we really are? We are all sorts of people.”

For two men with multiple identities, it’s an apt way to start an interview.

Together Jacques Servin (also known as Andy Bichlbaum, above right) and Igor Vamos (aka Mike Bonanno, on the left, above) are The Yes Men, the anti-capitalist activists and film-makers who fuse comedy with left-wing politics to hold corporations and governments to account.

Their notable stunts range from posing as Obama Administration officials to announce that the US is switching to 100% renewable energy through the medium of Native American song and dance – to wiping $2 billion off Dow Chemicals’ share market value by appearing on BBC World apologising for the company’s involvement in the Bhopal disaster.

Like the court jesters in a godforsaken medieval kingdom, they are laughing at a situation too grim to be taken seriously

They protest by adopting names, changing hairstyles and hiring actors to impersonate corporate spokesman and play out bizarre set pieces. Their new film, The Yes Men Are Revolting, about the pair’s involvement in the green movement, includes a skit where they present a caged polar bear to a Dutch zoo while pretending to be Gazprom employees looking to drum up support for oil drilling in the Arctic.

“Shell is currently saying that they stand for development of the poor in the global south, despite being responsible for massive human rights violations in the Niger Delta.

“When corporations say things like that, you could almost believe they could say anything.”

For the duo, not only is comedy the best means for holding corporate power to account, in many ways it’s all they have. Looking at recent campaigns from NGOs, it’s clear that many groups are beginning to agree with them.

Seen for so long as a place where humour went to die, more recently the hard left have embraced comedy as a key part of their arsenal.

“People want to hear that [Shell are] going to stop exploiting people and the environment,” says Vamos

Throughout our interview The Yes Men pepper the conversation with doomsday-style statements. The anti-austerity movement is compared to the struggle to abolish slavery, and oil companies are slammed as blackmailers for threatening to axe jobs unless they receive generous government subsidies.

Economic collapse, a ferocious financial sector and impending climate disaster, the world as they see it is a bleak one. Like the court jesters in a godforsaken medieval kingdom, they are laughing at a situation too grim to be taken seriously.

“What other tool do we have to address these things? What other way do you have to get issues in the news?” asks Servin, the more exuberant of the pair.

“Other than getting a joke for mainstream journalists to run with. You either have to commit a heinous crime, or they have to be convinced that an issue is important, which doesn’t happen. So you have to use humour to get into the news.”

One of the most striking things about their activists’ three films, is the way the assembled journalists appear to blindly accept the information presented to them at fake press conferences.

Used to getting information from corporate press officers and nameless government officials and publishing it as quickly as possible on social media, one reporter from Associated Press at a Yes Men event went as far as tweeting that General Electric was giving the US government back its tax rebate as recompense for not paying tax in the country, despite making $28 billion in profit since 2005.

“When we announce that Shell is going to do the right thing, people believe it, because they want to believe it. People want to hear that they’re going to stop exploiting people and the environment,” says Vamos.

But rather than simply delighting in outsmarting clumsy journalists, Servin and Vamos see their best work as the campaigns done in collaboration with reporters.

“Most journalists really care about their job and go into journalism wanting to make a difference. It’s the system that is paying journalists less and less, which means they have less time to check facts and take time with stories,” argues Servin.

Throughout their most recent film the duo appear to be wrestling with the life they’ve chosen for themselves.

“We really challenge each other. We push each other to do things and question things more than anyone else does”

There are stages in The Yes Men Are Revolting when the life of penniless do-gooders seems to be getting to them. We see Servin get dumped by his boyfriend for spending too much time at work. Vamos, meanwhile, moves to Scotland with his wife to have their third child away from the political tumult in New York.

Things pick up for the pair when they get involved in the Occupy Movement in 2011, but the overall sense you get from the remarkably honest film is of two dear old friends, who, after 19 years of working together and using their day jobs in academia to fund their campaigns, are getting a little too old for this stuff.

Meeting them in person, the impression you get couldn’t be more different. Both comfortably middle-aged, with thinning, and greying hair, respectively, the two men still have plenty of fight left in them.

Then of course, they have each other.

“We’re like an old married couple,” says Vamos. “We dodder around arguing, but we have our tender moments.”

“Well actually we’re not at that stage yet,” interrupts Servin. The pair often come close to finishing off each other’s sentences.