Are the COP21 corporate sponsors as green as they say they are? 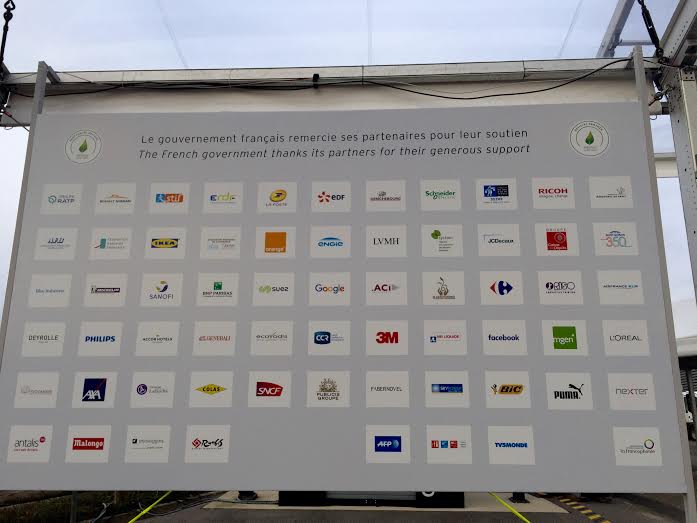 Some corporate sponsors of the COP21 Paris climate talks are failing to properly report their greenhouse gas (GHG) emissions, a new report reveals.

The Paris climate conference is sponsored by over 60 companies including big polluters EDF, Engie and BNP Paribas. And while countries continue to negotiate a deal on tackling climate change, what have these corporate sponsors brought to the table?

A new study published this week by French social research group BASIC and the Multinationals Observatory shows that very few of the COP21 sponsors are declaring their GHG emissions in a transparent way.

Of these, only one company – EDF – has actually reduced its overall carbon footprint in line with EU targets.

Olivier Petitjean of Multinationals Observatory told Unearthed: “There has been a growing trend, especially when you listen to what the French government says, to suggest that corporations have all the solutions to deal with the climate crisis, and that they are the ones that will deliver on the objectives set in Paris.”

“But as we show in our report, private companies are not as exemplary as they’d like to pretend. Only a minority of them report on their emissions in a transparent, accessible way,” Petitjean said.

Only four of the ten companies examined actually publish their GHG emissions data: BNP Paribas, Carrefour, Kering and LVMH. However, none of these companies take into consideration the full impact of its business’ value chain – from raw materials to waste disposal.

And while half of the companies in the study – Accor, Kering, L’Oréal, Michelin and Renault – did commission a full assessment of their emissions over the value chain, none of them have shown any GHG emission cuts at this scale.

The failure to address a companies’ upstream and downstream emissions is troubling given that for these COP21 sponsors, the majority of their emissions are located in these areas which represent up to 85 percent of their global GHG footprint.

Where companies do make GHG reductions, many times this is done through carbon offsets elsewhere rather than investing in emission cuts at their home-operations in Europe.

In particular, Petitjean highlighted the contradiction between EDF and Engie’s prominence at the climate talks compared to their environmental performance.

“The French government has always been very explicit about its intention to use COP21 to promote the French ‘national champions’, Engie and EDF,” said Petitjean, noting that both companies have large-scale advertising campaigns going on which highlight their sponsorship of the climate talks.”

He continued: “When you look at the reality of their investments and their portfolio, the share of renewables is still really minimal, and it mostly comes from gobbling up smaller companies.”

Both also continue to invest in coal and have also just signed contracts with Cheniere to import liquefied natural gas from the U.S. starting in 2017.