Comment: How the world is falling in love with e-bikes 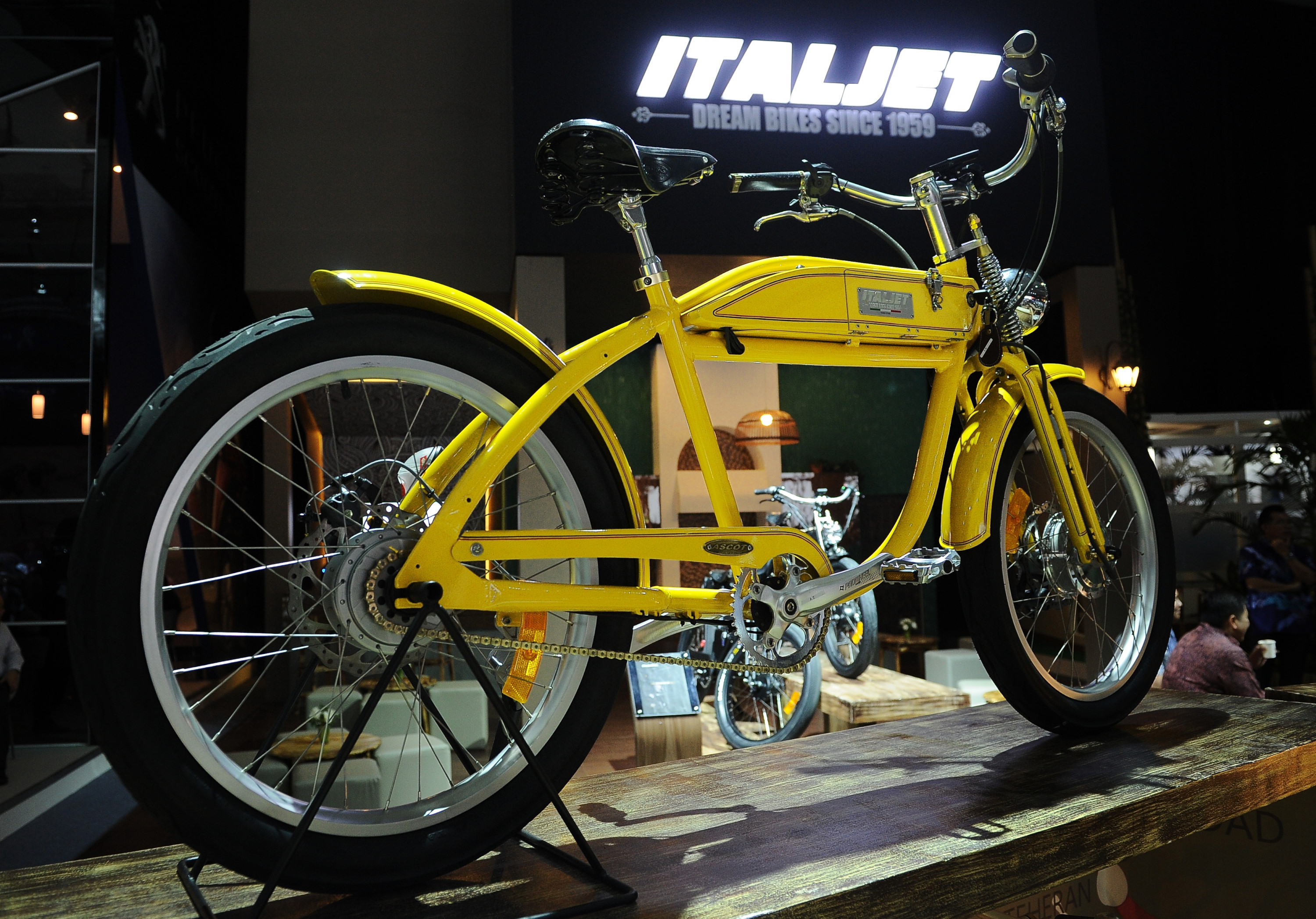 The world of e-bikes is a fast growing one with international courier companies and the super rich yachting set amongst their fans. In China e-bike use has gone from virtually zero in 2005 to an estimated 230 million this year. This represents the largest adoption of an alternative fuel technology in the history of motorisation.

In Europe for every electric car bought, 60 e-bikes are sold. And electric bikes are available in every shape and size, form e-cargo bikes, to foldable e-bikes, to luxury e-bikes encrusted with Swarovski crystals for the super-rich.

We all know that emissions from transport are one of the major contributors to climate change and that using your car less is one of the most simple ways you can reduce your own emissions. Fossil fuel use from transport has been one of the toughest areas to address when it comes to big cuts in CO2 emissions.  Car companies have dragged their heels in adopting alternatives to the internal combustion engine – and efforts by environmentalists to encourage less car use have been attacked for undermining people’s personal freedom and sending us back to the dark ages.

But as 75% of oil use in the UK  is from transport, it’s clear that something has to change in how we get around if we’re to wean ourselves off fossil fuels. E-bikes, as they are now known, may well be part of the solution. They’re much cheaper than a car, retailing at as little as £500 in the UK, take up less space on the roads and – since a high proportion of car journeys transport only one person – are suitable for many people’s needs.

So why should we be so excited about these two-wheeled wonders? I decided to find out.

I’d never thought about riding an e-bike. I’ve been a cyclist all my adult life and and have been quite happy whizzing about London on my normal push bike for the past 15 years.. Alongside buses, my bike’s been my main form of transport. But in the last 18 months, two things changed. My family grew, when I had a second baby, and we moved to Auckland – a very hilly city with a fairly useless public transport system. Before we left London, I’d been plotting to get a trailer for my bike to take the kids around but in Auckland I’ve been struggling to get just myself up the hills, let alone two small children. I’d resigned myself to having to accept car use as part of my almost daily life, albeit with lots of walking, the odd bus and biking where possible.

So when I started reading about electric cargo bikes I got quite excited – and even more so when the only Auckland retailer of e-bikes agreed to let me test drive one for a week. Christian Hoff-Nielsen, a Dane (of course) living in New Zealand, started a business hiring and selling e-bikes in Auckland when he realised how great they are for overcoming the city’s hills. He told me how many of his customers are buying e-bikes to do long commutes over the very spread-out city and to avoid its notorious traffic congestion. He’s also beginning to sell e-cargo bikes to local businesses who recognise the efficiency savings in making deliveries by bike. British companies are also embracing cargo bikes for deliveries in urban areas and motorising them means that heavier cargo can be carried over longer distances. 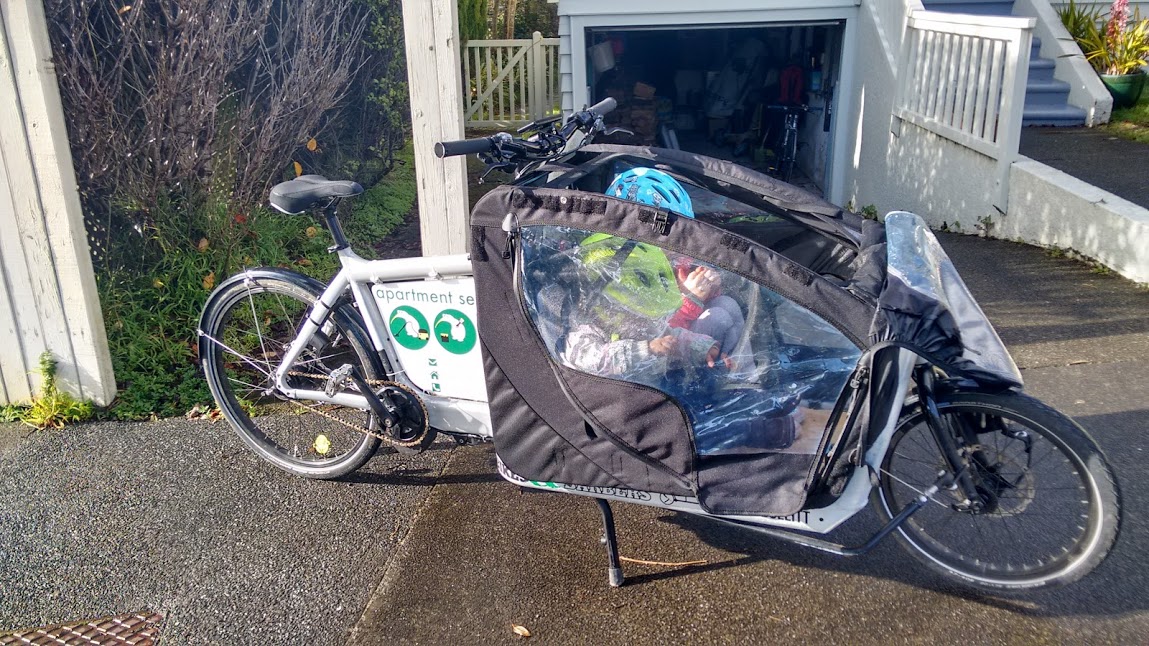 My cargo is of the human variety, so Christian lent me this e-bullitt with a covered seat for two children at the front. It’s a big and heavy contraption and I was glad I didn’t have the kids with me when I went to collect it, as my first attempt at riding was wobbly, short and almost took out a couple of tables at a pavement cafe. But once I’d gone around a local park for a bit, I was away. It was brilliant. I loved it. I wanted one.

Picking the kids up from daycare, I had a smug-factor of 10. I live in an affluent neighbourhood where every other car is humongous 4×4 but there we were whizzing around on our bike. it felt good to have the children in front of me, instead of trailing behind and they got to sit together and squabble – just like in a family car –  but with a great view of the world. Later I went to the supermarket and easily fit the weekly shop into the box (admittedly not with the children). For the rest of the week that I had the bike, the car sat moribund outside the house on all but one day – when some of New Zealand’s finest torrential rain put off this slightly fair-weather cyclist.

Contrary to popular belief, the e-bike didn’t feel like a lazy option. I still worked up a sweat getting up hills.  Most of the time I chose to have the motor on one of its lowest settings, so that I’d still be putting in the effort.  Using it just for short journeys around the city, I only had to charge the lithium battery once in the week. According to Christian, the batteries should last for should for around 8 years and with battery technology improving all the time, that will most likely change. 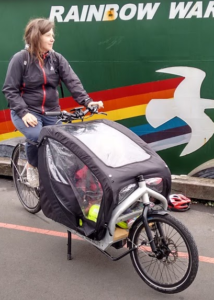 It was a sad moment when I had to give back the ‘bike with two seats’, as it became known in our house. And at $6000 (£3000) we’re unlikely to be buying one soon. But the seed of what e-mobility can do for us has been firmly planted and we might well look at other options, like buying a trailer and fitting motors to our existing bikes. Of course not everybody needs an electric bike. In flat areas for shorter journeys  pedal power alone can see you through. And with environmental concerns about batteries they’re not a completely green solution. But where hills and long distances put people off, e-bikes definitely provide an excellent low or, even zero-carbon alternative to cars.

But like many of the changes needed to reduce our fossil fuel use, the availability of clean technology alone isn’t enough. Local and national governments need to do far more to encourage the transition. For bikes, cycling infrastructure needs to be vastly improved to make cycling safer. In Denmark, for example, where over 50% of journeys in the capital are made by bike, there are over 12,000km of cycle-ways. And as long as the cost of petrol-powered motoring remains relatively cheap, the perceived benefits of swapping your car for an e-bike are fewer. So whilst the UK a government that thinks it’s a good idea to freeze the increase on fuel-duty and delink road tax and emissions, the e-bike revolution might not come as soon as it should. But don’t let that discourage you – try one. You might find yourself swooning like I did.