Peabody: Why the world’s largest private coal miner went bust — in one graph 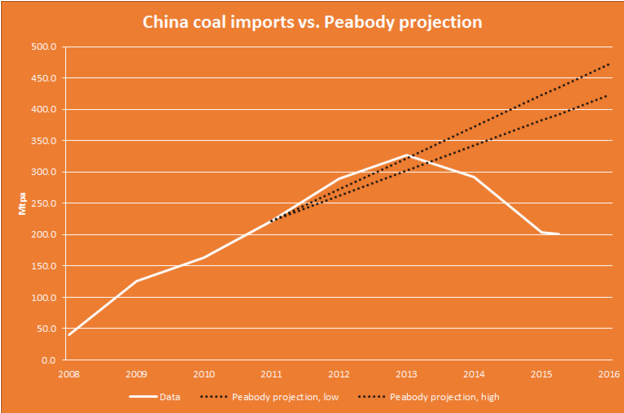 So we went back to 2012 and found this slide that shows how completely, fantastically wrong the company got China’s coal demand.

A few short years back, the company was projecting a doubling of China’s coal imports from 2011 to 2016 — in reality, the imports are likely to fall back to 2011 levels or below this year, diving more than 40% below their peak in 2013.

The difference in the value of the Chinese market is about $10 billion. 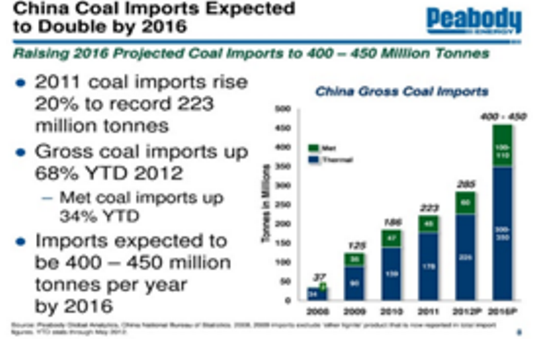 It’s not just idle cheerleading; the company predicated its entire investment and business plan on booming coal demand from China — and to an extent from India, where demand for coal imports also fell 15% on year in the most recent 12 months.

There are two key reasons for the dramatic reversal in China’s coal use: booming clean energy and the rebalancing of the economy after decades of unbalanced breakneck growth driven by smokestack industries. Peabody stubbornly refused to see either of these trends.

The company was touting investments in new mines in Australia and Indonesia as a way to access the Chinese and Indian markets. They were using their high exposure to the coal market (“pure play”) as a selling point: 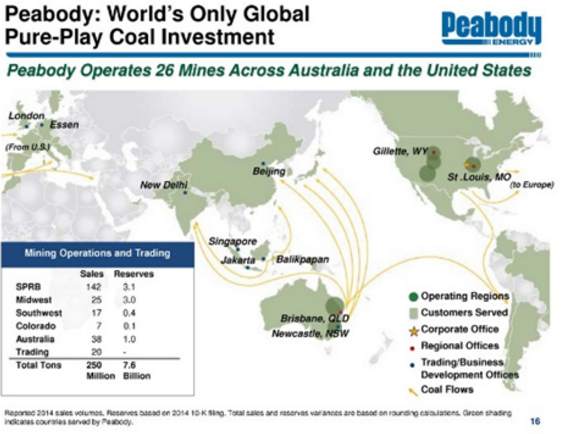 That’s why they spent over $5 billion USD on purchasing Macarthur Coal in Australia (which never led to any results according to The Economist) and pushed for additional export capacity at the Gateway Pacific Terminal, contracting in 2011 to buy up to one half of the planned capacity of the project: 24 million metric tons per year (mmty) of the 48 mmty total planned coal export capacity from the project.

At the time of its contract with GPT, Peabody’s then CEO Greg Boyce announced:

“Opening the door to a new era of U.S. exports from the nation’s largest and most productive coal region to the world’s best market for coal. Asian nations are leading the world in economic growth and industrial production.

But Peabody isn’t the only fossil fuel company which makes a habit of forecasting ever rising demand for their product.

Today it’s the turn of oil giants like BP – again based largely forecast demand from China.