London children may be breathing even more air pollution than adults 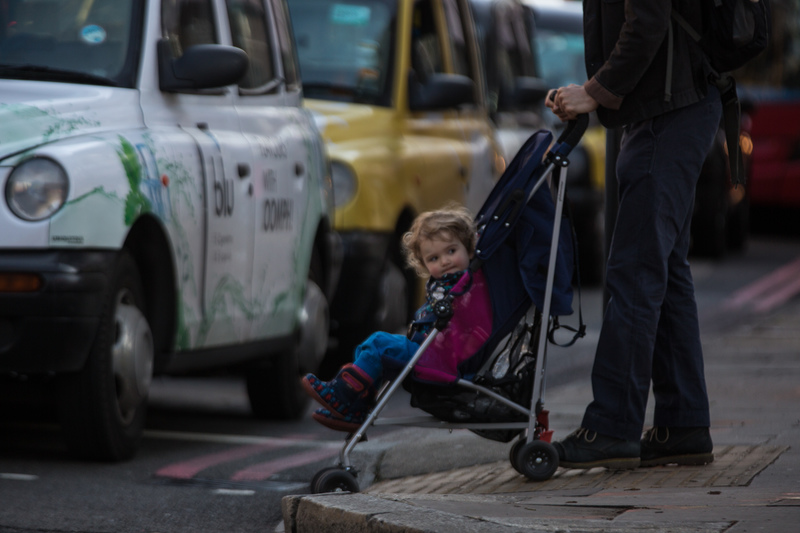 Babies in buggies in UK cities are exposed to the same levels of air pollution as their accompanied adults — and may even breathe in more particulates, according to the results of a series of trial experiments.

This follows a 2015 study in Barcelona that found “infants transported by stroller in urban areas are more exposed to air pollution than adults.”

The UK experiment – which falls far short of the standards of a scientific study – looked at three family journeys in London and Manchester along normal routes.

A further test was conducted on Oxford Street, a pollution hotspot in the capital.

The data was then analysed by a leading air pollution expert, Dr Abigail Whitehouse, a clinical research fellow at Queen Mary University.

In two cases she found that the average level of exposure to air pollution was similar between the child and the adult, but in the third case it was 2.8% higher for the child.

On Oxford Street, the child was breathing air that was on average 5.4% more polluted; they also saw higher and more frequent pollution peaks.

In all three of the ‘family route’ cases the child experienced a slightly higher number of peaks in air pollution.

The limited data sample in all of the experiments, however, means it is not possible to comment on the statistical significance of the data.

The issue is currently being examined by various researchers — with mixed results.

Speaking to Unearthed, Dr Whitehouse said: “We need to investigate this further – if there really is a higher exposure to peaks and a possible higher exposure from traffic then we need to make changes to our walks to ensure that we are protecting our children from pollution – this is true regardless of the levels.”

One theory researchers are keen to examine is that children experience higher pollution levels on busy roads because they are closer to the exhausts of cars, lorries and busses — especially diesel vehicles.

This could also mean that babies and toddlers are exposed to even greater levels of particulate pollutants than official readings suggest.

Statistics from DEFRA and Kings College regularly show pollution along London’s major roads to be many times above EU limits.

Air pollution causes around 40,000 deaths in the UK every year and persistent childhood exposure to air pollution – and in particular micro-particles (PM 2.5) – has been linked to reduced lung function in adults and exacerbated asthma symptoms. 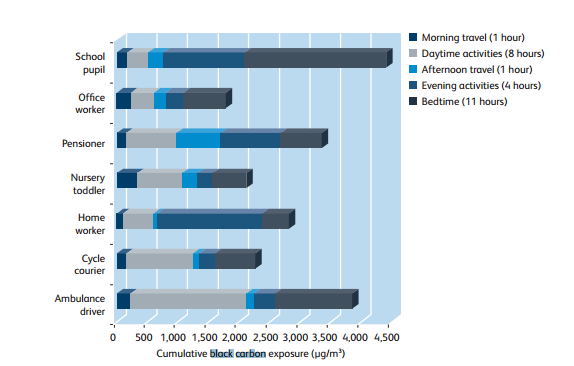 In London, almost a quarter of school children are exposed to dangerous air pollution that breaches EU and World Health Organisation (WHO) thresholds, according to a report from think tank IPPR.

Researchers have found that children are amongst the most exposed to air pollution during their normal day.

Working with parents, researchers used pollution monitors – one attached to an adult pushing the buggy, one attached to the buggy at child head height – and walked down a series of streets in major UK cities.

The family walked down roads they would frequently use – which were not especially busy – on days with normal to low pollution levels.

The Oxford Street test, which was essentially the same process, was conducted in November 2015. 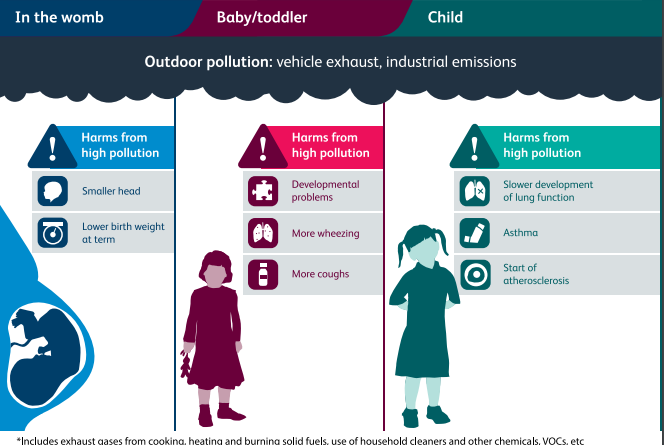 As in other similar experiments the monitors measured levels of ‘black carbon’.

Black carbon is  the part of particulate matter that most strongly absorbs light. It is created by the incomplete combustion of fuels and is a major part of soot.

As such it can be used as a surrogate marker for the overall level of micro-particles (PM 2.5) present in the air.

The monitors used measure the amount of black carbon in the sampled air through an attached tubing every 30 seconds, which then gives an average result for that walk.

It also gives an indication of when the person was exposed to a peak in exposure (a high amount in a short period of time).

Tiny particles of matter (particulates or PM) with a diameter of 2.5 micrometres or less is particularly dangerous, because it can reach deep inside the lungs when inhaled and enter the bloodstream, according to WHO.

This is the map of the walk.

We started at 9am at the house and, although it’s a 20 minute walk, we spent two hours.

An air pollution monitor was plugged next to the baby’s mouth and the mother’s.

We took the results to Queen Mary’s and they show that both the mum and child experience the same peaks (likely to happen due to a truck or bus passing by or the crossing at a roundabout) but that overall the child is clearly more exposed.

The data collected varied according to the routes followed by the parents, and also the busy and notoriously smoggy Oxford Street.

Because the roads were not always busy the average levels may correspond to the average amounts of air pollution in the air — rather than being linked to exhaust emissions.

Indeed, one experiment found almost no difference between the parent and the buggy whilst the other two found only very minor variations except at certain times.

Here, for example, is what the chart looks like for Manchester, where the differences were more pronounced than in London – showing how air pollution hits the two subjects differently, at different times.

The raw data is available here.

The Oxford Street test saw greater discrepancy between the pollution that the parents would inhale and their buggy-bound children.

This experiment is a trial — and has basically no scientific significance.

However, in conjunction with other research, it does suggest more work needs to be done to understand whether babies and toddlers – who are especially vulnerable to air pollution – are at increased risk when travelling along busy roads.

It is also important to note that because children are developing, limited exposure to air pollution poses little risk. The risk comes from sustained exposure over time.