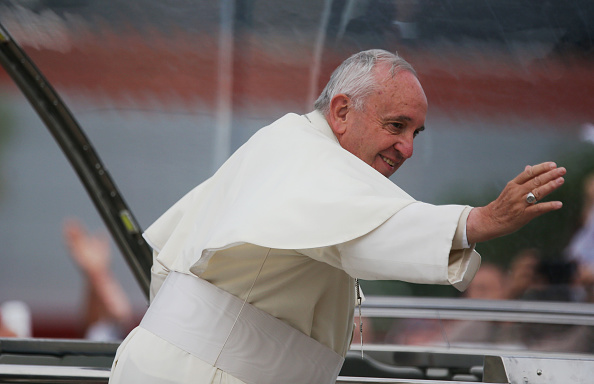 Two Vatican Bank board members have financial links to the fossil fuels industry, with one reported to have donated to a leading climate sceptic organisation, according to an Unearthed investigation.

The news comes with the trouble-hit institution still reeling after two board members unexpectedly resigned in May, citing concerns over the way the Bank was being run.

Now with Pope Francis himself having spoken out against the fossil fuel industry, our investigation has found that two members of the bank’s board have senior roles in companies which either operate in the energy sector or have millions of pounds invested in it, including in oil giants Shell and Exxon.

Vatican Bank board member Sir Michael Hintze is the chief executive of Cayman Island-based private hedge fund CQS Cayman which holds $8.3m worth of stocks in energy companies, including $1.7million in fracking giant Devon Energy and Anadarko Petroleum, according to analysis by Bloomberg.

Hintze was also chief executive and portfolio manager of CQS Rig Finance before it was liquidated in 2014. Launched by CQS Cayman, CQS Rig Finance constructed and maintained oil and gas rigs, as well as other equipment used by the oil and gas industry.

The Australian-born hedge fund manager is also a trustee of the right-wing thinktank the Institute of Economic Affairs, which has a history of backing climate sceptic research and Hintz is reportedly a major financial backer of Nigel Lawson’s controversial climate sceptic pressure group the Global Warming Policy Foundation (GWPF).

In 2012, the Guardian obtained emails showing Hintze backing the foundation. Hintze failed to respond to requests from Unearthed to clarify his relationship with GWPF and to discuss CQS’s holdings in the energy sector.

GWPF heavily criticised the Pope’s climate encyclical when it was published last year.

The group wrote in a press release: “the Vatican is being led astray by its advisors by statements on climate change that are scientifically lacking and ethically dubious.”

Hintze is also a prominent donor to the Conservative Party and supported the campaign for Britain to leave the European Union, donating £100,000 to Vote Leave the day before Britons went to the polls.

Another Vatican Bank board member also has ties to the energy sector.

Board president Jean-Baptiste Douville de Franssu advises two funds which together hold shares worth hundreds of millions of dollars in oil and gas companies.

German banker Clemens Boersig, who quit his post at the bank in May, received $218,000  for his role on the board of gas company Linde AG last year and remains on the company’s supervisory board.

The firm, which specialises in industrial chemicals, healthcare and engineering is involved in coal gasification projects in India and has recently shown an interest in the burgeoning Iranian petrochemicals industry, attending an event in Tehran before Christmas. Linde is not solely interested in fossil fuels and backs “hydrogen economy”, a possible replacement for oil.

Douville de Franssu, Hintze and Boersig were all appointed to the bank’s Board of Superintendence, which directs its policies and investment strategy, in July 2014 as part of an effort to reform the institution.

Mauricio Larraín, former US ambassador to Vatican City Mary Ann Glendon and Alfred Xuereb, the non-voting secretary, the church’s representative on the board were appointed to the bank’s board at the same time; as was Carlo Salvatori who quit his post, along with Boersig, in May.

Vatican Bank board members enjoy a five-year mandate, but both Boersig and Salvatori chose to quit their posts early. At the time, Reuters reported that both men were frustrated at the slow pace of change at the institution.

Using Bloomberg, Greenpeace went through the financial interests of all the board members.

“Climate change is a problem which can no longer be left to a future generation” – Pope Francis, September 2015

In his encyclical last year, Pope Francis stated that destroying the natural world for man’s own benefit was a “sin” against God and future generations.

As a result campaign groups and activists, like 350.org and Naomi Klein, have called for the Vatican Bank to match the Pope’s message on climate change and divest from oil and coal firms.

Vatican Bank spokesperson Max Hohenberg previously told the Guardian: “there really isn’t much to divest”. It is reported that 95% of the bank’s assets are tied up in government bonds. It is estimated that the bank has 6 billion Euros under management.

All of the board members featured in this story failed to respond to requests for comment sent by Unearthed.

The Vatican Bank refused to comment on our findings.