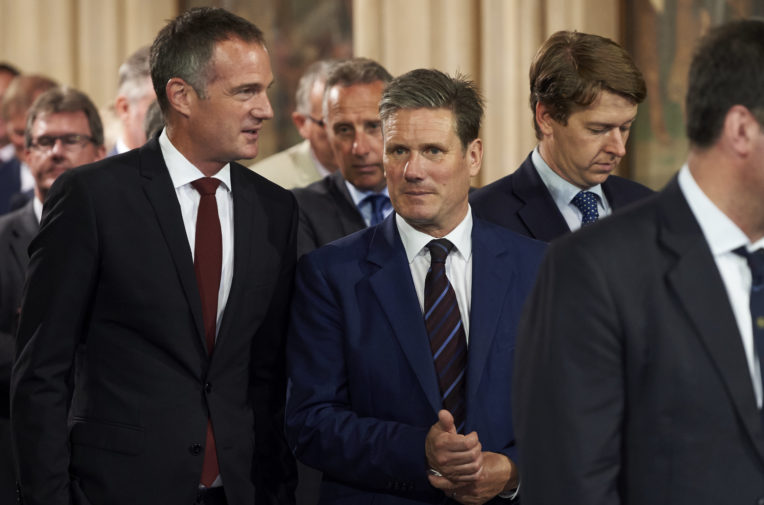 Keir Starmer: ‘Tory Brexiteers are living in a fantasy world’

Unearthed meets Labour's shadow Brexit secretary to discuss the EU, the environment, and how he would approach trade negotiations with Trump

Keir Starmer: ‘Tory Brexiteers are living in a fantasy world’

Unearthed meets Labour's shadow Brexit secretary to discuss the EU, the environment, and how he would approach trade negotiations with Trump

It’s been a big few months for Labour and for the man with arguably the biggest job in the shadow cabinet, Keir Starmer.

After the results of the snap general election in June, Labour is tantalisingly and surprisingly close to power and the party’s stance on Britain’s decision to leave the EU has never been under more scrutiny.

In all this, the former human rights lawyer has gone from being something of an afterthought in the Brexit debate to being one of the key players.

Unearthed went to Starmer’s office in Whitehall just a few days before he was due to deliver a major speech at the Labour Party conference in Brighton, to try to get a better understanding of what a Labour Brexit would look like.

“That’s completely unacceptable. And if we’ve got no deal, we’ve got no flights because the aviation framework is an agreed framework with the EU. This talk about no deal has to be seen in its proper context. No deal is an unthinkable place for us to be and that’s why it’s bad for us and bad for the EU.”

But what if Labour came to power and was unable to negotiate a trade deal with Brussels?

“If the Labour party comes to power and we are negotiating, we would be able to reach a deal,” he argues.

“I have been going backwards and forwards from Brussels pretty well every month since I’ve been in post. I am convinced that with a Labour approach we would be able to reach a deal and that’s what we would be focusing on.”

He argues that the government’s Withdrawal bill is a major threat to the environment.

“There are really huge challenges with the withdrawal bill because the government is seeking to grab a lot of power for itself.

“This is important for the environment, because for a number of years most of the important standards on the environment have been set by the EU, take air quality as one example, and there’s a real danger as we unhook that we lose those standards or don’t keep up. Now the government says ‘don’t worry, we’re going to convert them into our law’.

“But what it’s not bringing across is any way to enforce these things. So you keep those rights and protections but you lose the ability to enforce them. And that’s a massive challenge that we have to fight as this bill goes through parliament this autumn.

He says Labour will create new regulatory bodies to ensure that Britain’s environmental standards do not fall behind the rest of Europe’s and will collaborate with the EU on climate and environment policy.

The sooner May faces the fantasy Brexiteers down, the better

“We’re clear in our manifesto that cooperation and collaboration with the EU on issues like the environment is vital. In other words, we want a progressive partnership with the EU. Withdrawing this all into your own law is necessary, but environmental issues are international issues.

“We would obviously be changing the legislation, but we would also be changing the tone and approach and we would indicate that we want to continue to collaborate on environmental issues at the international level.”

He mocks Michael Gove’s claim that Brexit will see an improvement in environmental protections in the UK, saying that the environment secretary lives in a “fantasy world.”

“I think the sooner the Prime Minister faces the fantasy Brexiteers down, the better. At the same time, she could do with shifting her own inflexible red lines which are doing such problems in the negotiations. We have to proceed in the way that is best for our country. Which is realistic and grown-up and the sooner we do that, the better.”

Labour has been walking a tightrope on Brexit since the referendum to leave the European Union in 2016.

Despite the vast majority of the party’s senior figures and almost the entirety of its membership campaigning to remain in the EU, Labour have embraced Brexit.

The political battle with the Conservatives has been fought not on reversing the referendum result, but on what kind of deal should be struck with Europe.

In this context, Starmer is clear on the differences between his party and the Conservatives.

“Those who campaigned the hardest and the longest to leave the EU did so for ideological reasons. They did so in order to enable the UK to deregulate, to strip out these protections. They’re pretty explicit about that, if you look at the leading leave campaigners,” he says.

“They say there’s too much red tape, too much bureaucracy, we’d be much more competitive if we didn’t have it. That’s the deregulation agenda. Whereas we in the Labour Party are saying how do we keep up with standards, how do we enforce standards; those that are ideologically driven in the leave campaign are saying let’s get rid of the standards in the first place and not have any enforcement.

“That is a huge threat because then you’re undoing a lot of the good work of the last 20 years. And this is particularly relevant when you’ve got a president of America who is going backwards on environmental protection.”

One of the main fears about Britain leaving the EU for left-of-centre voters has been that the UK would find itself having to forge an alliance with Donald Trump.

Theresa May has been heavily criticised a number of occasions for refusing to speak out against some of the Donald Trump’s rhetoric and actions, most recently his failure to fully condemn the violent far-right protests in Charlottesville.

Starmer insists that Labour would speak out if it won the next election.

As for the idea that a trade deal with America could weaken UK environmental laws, Starmer has a red line.

“Trade deals have to be seen in the proper framework in terms of the standards and protections they bring. We would only be interested in a trade deal that was in an ethical framework. That is really important whether it’s the US or any other country. And if you concede that, whether with the US or any country, you’re conceding the cornerstone of your trade policy and we wouldn’t do that.”

But what would he do if he had to meet the President?

“I’ve met lots of people in my life as a human rights lawyer, in my life as director of public prosecutions and in my current role and I always adopt the same approach and I would adopt it with President Trump and that is to have absolute clarity about what my values are and that is the framework I would use to make decisions. I am an internationalist and I believe in international rules and that is the framework with which I would approach President Trump or any other world leader.”

And what would a Jeremy Corbyn-Trump summit look like?

“You’d probably need to ask Jeremy about that, but I would envisage that Jeremy would be courteous, because Jeremy is always courteous. That’s something that has marked him out. He does not descend into offence and doesn’t take offence.

“But equally, he’d be very strong about his values and his framework, because that is what drives him. That is who he is. That important. I’d imagine that he’d of course be courteous, but he’d also be very clear about what he stood for.”

Throughout our conversation, Starmer is deliberate and thoughtful. The former Director of Public Prosecutions, the most senior public prosecutor role in the UK, is still more lawyer than politician having only entered parliament in 2015.

Sat in his rather austere parliamentary office, he rarely raises his voice and when we ask him what his values are, he pauses for a moment, not because he’s scrambling for a focus-group ready answer in a kind of Thick of It manner, but because you sense that he’s not that comfortable talking about himself.

He pauses for a moment and says: “International cooperation and collaboration. The rule of law. That everyone is subject to the law, we cannot act in arbitrary way. Peace and democracy and the enforcement of human rights and global standards. That is the way international leaders and institutions should work, in my view.”

At the end of the interview, mics off but camera still rolling, we ask whether, deep down, he’d still really like to be in the EU.

After teasing him that he’ll just give a politician’s answer, he says, calmly and passionately:

“Actually, I’m going to give a dad’s answer. I campaigned to stay in the EU and, obviously, I was devastated by the result.

“I’ve got two kids, a six-year-old girl and a nine-year-old boy and I was with them the morning after and I was really worried about what sort of world they were going to grow up in, not the technicalities of the customs union or the withdrawal bill or any of that stuff. The instinct is to rub out the result, which is what the Lib Dems have done. But we have to fight. Whatever agreement we get in 2022/23, my kids are going to grow up with it. So what we believe in has got to be in that agreement.

“If all I did was spend my time thinking how are we going to reverse the result, I wouldn’t be doing what I need to do which is trying to make sure that, if at all possible, that final agreement contains the values I care about.”