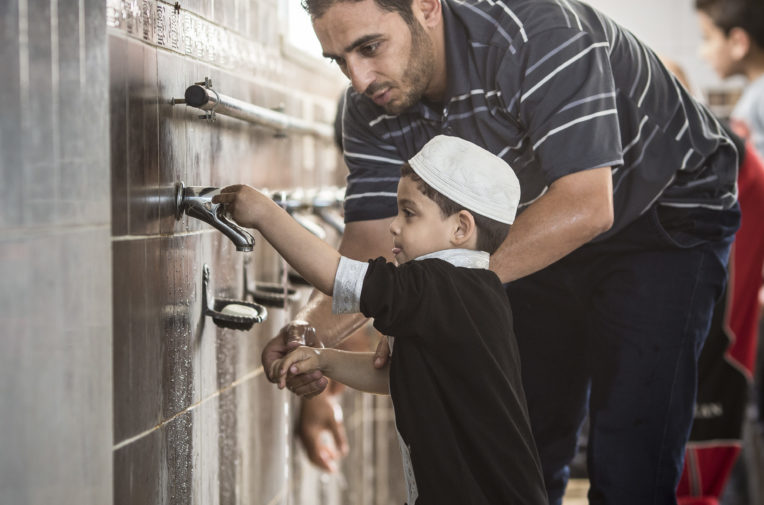 Green fatwas: the imams championing the environment in water-scarce Jordan

Jordan is facing severe water shortages and as refugees numbers rise, so is demand. The state is enlisting imams to help.

Green fatwas: the imams championing the environment in water-scarce Jordan

Jordan is facing severe water shortages and as refugees numbers rise, so is demand. The state is enlisting imams to help.

Even before the arrival of an estimated 1.3 million refugees, Jordan was one of the most water-scarce countries in the world.

In 2014, annual water availability plummeted from 147 cubic metres to 123 cm per person, far below the international water poverty line of 500cm per capital per year.

In the northern Jordanian city of Mafraq, where the population has doubled since the arrival of Syrians fleeing war across the border, pressure on strained resources has exacerbated tensions between local and refugee communities.

“We often hear that Syrians are using more water than Jordanians because it was free in Syria,” says Björn Zimprich, project manager at German Development Agency GIZ. He refers to several cases when a Syrian family has moved into a building and the communal water bill has risen. There have also been reports, he says, that the prices for water tanks to be re-filled are increasing in some areas due to rising demand.

But water subsidies are heavy: up to 70% in some households.

“This sends a mixed message,” says Ruba Al-Zubi, CEO of EDAMA, an association promoting sustainable solutions in Jordan. “Water is cheap to buy but that doesn’t mean it’s not valuable.”

Between 40 to 50% of Jordan’s water is lost in distribution – largely due to leaky pipes and theft.

Faced with severe water shortages, the state has now started to issue green fatwas – and it is enlisting imams to help.

One such religious edict, issued in April, said: “Polluting water, in all forms, is prohibited and contradicts the teachings of the Shari’ah”. Another asked people to report leakages in water networks. Fatwas are published on the department website and in some cases circulated in the local media.

“There is a lot of knowledge here about water scarcity but it’s not effectively communicated to everybody. Fatwas are a good way of doing that” says Zimprich, whose team is working with imams (religious leaders) and waithat (female preachers) to raise awareness about water-saving techniques in Jordanian communities.

In the ablution areas of mosques, where worshippers wash before prayer, taps are often left running.

GIZ has partnered  with the Jordanian Ministry of Awqaf and Islamic Affairs, which is responsible for religious affairs in the country, to enlist imams and waithat water ambassadors. Mosques around the country are being used to set an example and some 1800 religious leaders have signed up to be ambassadors.

Now water-saving devices have been installed at mosques and harvesting facilities fitted to recycle the run-off.  By 2018, around 2,000 mosques – almost one third of the total – are expected to be running on renewables.

At first, some imams were skeptical, says Zimprich. “They felt that it’s the government’s responsibility to provide enough water, not a problem for them.”

But many others are on message.

Imam Ameen Alawneh first visited Azraq Wetland Reserve, a once-abundant oasis in Jordan’s Eastern desert, on a school trip 30 years ago. Since then, intensive pumping to supply urban areas with water and the drilling of  illegal wells for agriculture have seen the pools and streams shrink to 0.04% of their original size.

There have been a lot of moves to frame Friday speeches to match our current needs. The environment and water are first on the list

“I was really shocked. The oasis had almost disappeared,” he said, after re-visiting the site recently.

Back in Irbid, the Jordanian city where he is the imam of a local mosque, Alawaneh resolved to teach “lessons on the importance of water saving” and encourage worshippers “to conserve the rest of the resources we have.”

Jordan is among several Islamic countries to pass fatwas urging eco-friendly behaviour as momentum builds behind a global drive to harness the reach and resources of religion for environmental causes.

In August 2015, the Islamic Declaration on Climate Change was issued ahead of the Paris climate summit calling on muslims to phase out fossil fuels and transition to renewable energy by 2050. The declaration led to the formation of the Global Muslim Climate Network and the launch of the Clean Energy Mosques Campaign in 2016, which charged mosques across the world with reducing their energy consumption.

According to sustainability expert Dr. Odeh Al Jayyousi, “Muslims in many countries are starting to connect their faith with climate change.”

These strategies feed into a new National Green Growth Plan, which is designed to lay the foundations for a green economy. Jordan imports around 96% of its energy needs annually but regional conflicts have shut down many of its former supply routes.

Now, the government is investing  JOD50 million (£54 million)  for renewable energy and energy efficient projects up to 2018, Hamzeh adds.

“Islam can be an easy entry point to our communities,” says Kamal Kakish, researcher at WANA Institute, a Jordan-based think tank and partner on the project.

Around four million people attend Friday prayers in Jordan, where, he says, “There have been a lot of moves to frame Friday speeches to match our current needs, and of course, the environment and water are first on the list.”

But Imam Khaled Al Khatib, who presides over one of the largest mosques in Mafraq, is concerned that while worshippers may be receptive to this message at the mosque, it does not translate into changing habits at home.

His sermons draw on lessons inherent in Islamic teaching to respect the environment. “The Prophet Mohammed said do not overspend water even if you are sitting on a running river,” Khatib says, citing a well-known hadith (sayings of the Prophet Mohammed) exhorting Muslims to be mindful when performing ablution (washing before prayer).

“Whenever people hear that (conservation) is part of our religion, they are happy to make this link. The problem is when it comes to real implementation.”

But others are already starting to see a change.

Huda Al Namrat, a female preacher (waitha) emphasises the important role played by women in the household. “They can easily maintain the water by changing certain behavior,” she says. “The woman also has a great effect in raising the kids.”

Waitha Wafa Khalil has already seen signs of improvement in her local community, where families have noticed their bills drop since they started implementing her advice.

“Many of the families are informing me that they no longer are forced to buy water from water trucks, they can now manage the water quantity they get for the week and are saving the extra money.”