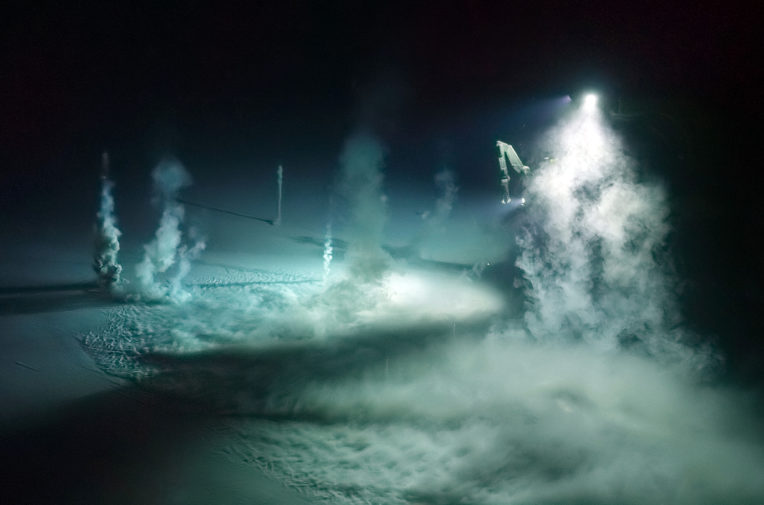 Take a deep breath: sixteen years on, Blue Planet is back

Take a deep breath: sixteen years on, Blue Planet is back

“I’m going to have to say we’ve got new techniques and new technologies and we’re going to places we’ve never been before. It’s true to an extent but it’s not what it’s about. What it’s about is that life underwater is amazing.”

David Attenborough is back and so is Blue Planet. Take a deep breath, he tells you, as the series opens.

Make it a really deep breath. Because it’s showing us the ocean at depths that only a tiny number of human beings have ever visited.

Consider that the standard limit for a scuba dive is 40m. Blue Planet drops down 8km in a submarine and stays there for hours. They drop 1km below Antartica; the first people to do so.

In these sub-zero alien worlds, there is complete darkness. There are fish that walk. And there is a lake – yes, a lake at the bottom of the ocean. And it’s a lake that erupts.

After 16 years away, Blue Planet Two will be back on our screens on Sunday 29 October on BBC1. The series is Attenborough’s return to a world that covers 70% of the planet’s surface. It’s a compendium of a four-year adventure that has taken in 39 countries on 125 expeditions.

There are the classic primal duels. Remember the iguana’s miraculous escape from a mass snake hunt in Planet Earth Two? Or the fight between the lions and a lonely giraffe?

We have seen tragedies happen because of plastic

The central battle of the first Blue Planet episode is in South African seas, and it’s bird versus fish. But it’s not any old fish. It’s a giant trevally: a fish that hunts alone, looks like a bulldog and has the ability to calculate the altitude and trajectory of a bird, at speed. I’ll let you put the odds on the likely victor.

Next we dive down to the rainbow landscape of the Great Barrier Reef to meet Percy the tuskfish. Percy can use tools and does so repeatedly. The team track him on his daily mission to crack open his clam, using the coral as an anvil.

Percy’s intelligence isn’t the only marine phenomenon in the series that is challenging scientific understanding; we are exposed to many others that are spawning new scientific research.

Much of the extraordinary footage has been made possible by technology that did not exist when the first series was filmed.

Rebreather equipment allows divers to stay down longer without creating bubbles that disturb the fish. Low-light cameras reveal bioluminescent rays swirling and dancing at night. Tow cameras allow us to surf alongside dolphins; which do so, as far as we can tell, just for the sheer hell of it.

Blue Planet Two also takes a resolute look at the future. Most episodes focus on a habitat: corals, coasts and underwater forests. But the final episode is dedicated to the changes occurring in the oceans.

The team are on the Great Barrier Reef in 2016 to witness what scientists have since recognised as the worst case of bleaching in its history. They dig into whether dolphins are exposing their young to pollutants through their milk.

And of course there is the plastic – everywhere, in every ocean, including among the ice of the Antarctic.

t’s perhaps this that upsets Attenborough most of all. At the series’ London premiere, he implored the audience to demand change.

“We have seen tragedies happen because of plastic,” he said. “We could actually do something about plastics right now… internationally, tomorrow. I just wish we would.”

It’s an issue that he recently told Unearthed he finds “heartbreaking”, recalling a sequence in the series in which an albatross feeds plastic, unsuspectingly, to its chick.

“There’s a shot of the young being fed, and what comes out of the mouth of the beak of the adult? Not sand-eels, not fish, not squid… it’s plastic. It’s heartbreaking. Heartbreaking.”

The changes in the oceans are not all gloomy. We are taken to Norwegian fjords to see humpback whales and orcas, drawn there every year by billions of herring. Their remarkable recovery is put down to effective regulation and fisheries management, after the collapse of stocks led them to commercial extinction in the sixties.

Attenborough is keen that we, his viewers, accept that we have a responsibility for the changing oceans.

“We may think we live a long way from the oceans,” he told the premiere.

“But what we actually do here – and in the middle of Asia – has direct effect on the oceans and what the oceans do affects us. It is one world and it is in our care. For the first time in 500 million years, one species has the future in the palm of its hands. I just hope we realise that that is the case.”