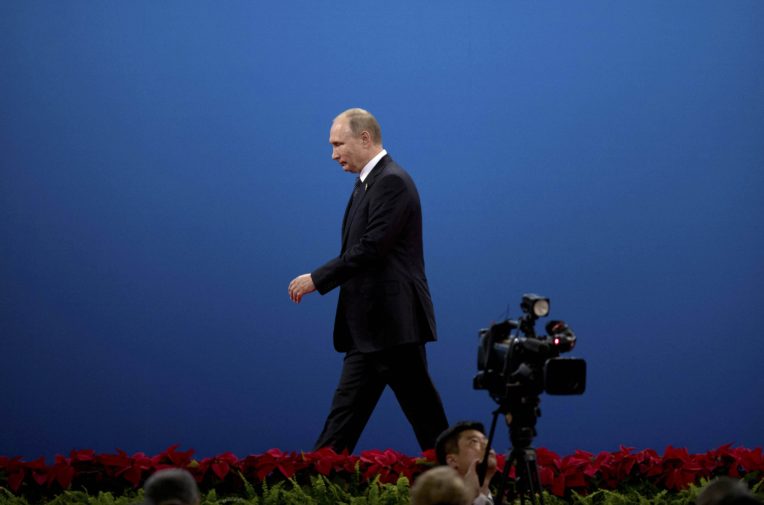 ‘An atmosphere of hate infects society’: reporting on the environment in Putin’s Russia

‘An atmosphere of hate infects society’: reporting on the environment in Putin’s Russia

This week’s violent attack on Russian journalist Tatyana Felgenhauer has thrown the country’s relationship with what’s left of its independent press into sharp relief.

Felgenhauer, who hosted a popular morning show on Moscow’s Ekho Moskvy radio station, was a frequent critic of President Vladimir Putin, which in turn exposed her to fierce criticism from the Russian state media. On Monday, she was stabbed in the neck in the station’s newsroom.

Authorities have named 48 year-old Boris Grits, a Russian-Israeli national, who published a video in which he said he had been in “telepathic contact” with Felgenhauer, as the suspect.

Felgenhauer is recovering in a Moscow hospital.

To find out more about journalism in Russia and to get an idea of how ordinary Russians stay informed about major issues like climate change, Unearthed spoke to Alexander Chernyck, a reporter with the independent business paper Kommersant.

An “atmosphere of hate” is infecting all parts of Russian society, Chernyck says.

“What happened to Tatyana is awful, but everyday people in Russia are attacked because of this atmosphere of hate in the country.”

In May, leading opposition figure Alexei Navalny lost sight in his right eye after a man threw paint thinner at his face. Navalny was prevented from getting treatment abroad due to a travel ban.

The FT reported earlier this month that despite social media users identifying the attacker within hours, police are yet to make an arrest.

Yulia Latynina, another broadcaster on Ekho Moskvy, fled Russia in September after being subjected to a series of violent incidents, including having her car set on fire outside her family home.

In 2012, Chernyck himself was beaten by policeman while reporting at an anti-Putin rally in Moscow. He spent two days in hospital and was forced to wear a neck brace for several weeks.

“I’m not a very brave person,” he insists. “But it’s part of my profession. Anyway, it’s much worse when the police beat ordinary people at a demonstration. People have a right to protest.”

When I started out around 15 years ago, there were many independent newspapers and TV channels. Now the state dominates

Chernyck, 31, is an award-winning journalist who writes about social issues and the environment in Russia.

He is also a member of Front Line Defenders, an organisation which campaigns for the rights of human rights activists around the world.

Born in the Siberian city of Tomsk in 1985, just before Mikhail Gorbachev looked to open up the Soviet Union with his policy of glasnost, Chernyck has seen his country change dramatically, from singing the Soviet anthem in nursery school, to watching his parents struggle to make ends meet during the chaotic 1990s, through to witnessing the rise of Putin during his teenage punk phase.

“I always saw journalism as a romantic profession and growing up there were more journalists. War reporters and the like: people to look up to.

“When I started out around 15 years ago, there were many independent newspapers and TV channels. Now the state dominates.”

The organisation Reporters Without Borders ranks Russia 148 out of 180 countries in its 2017 World Press Freedom Index, noting that there has been a marked decline in press freedom since Putin returned to the Kremlin in 2012: “leading independent news outlets have either been brought under control or throttled out of existence.”

Chernyck could earn a lot more money working for state media brands like Russia Today, but as he says: “If you want to be a journalist, you can’t do state propaganda.”

Yet still it seems his enthusiasm for his work is waning somewhat because of the daily controls placed on his reporting.

When talking to journalism students today, he concedes that he often tells them to look at other careers.

The way he describes it, Russia seems like a haven of doublethink and insecurity.

Since the journalist Anna Politkovskaya was shot and killed in the lobby of her apartment building in 2006, Russian media outlets have been reluctant to criticise the Kremlin.

Journalism that is critical of the government and major industries is often dismissed as being the work of foreign agents. Individual journalists are monstered and editors pressurised.

Big international stories like climate change are reported mainly at a local level – like the stories that proliferated about the environmental damage caused by the Sochi Winter Olympics in 2014.

“Russian leaders talk about diversifying the economy away from oil, but there’s been very little movement on that,” argues Chernyck.

While since the election of President Trump, Vladimir Putin has shifted his position to suggest humans are not responsible for climate change. At the UN climate conference in Paris in 2015, he described global warming as the “gravest challenges humanity is facing”.

Chernyck feels that with Russia now more mindful of its international reputation, it’s not as physically dangerous to report as it was at the time of Politkovskaya’s death, but the press is less free.

Last May, top editors from leading media organisation RBC suddenly lost their jobs after publishing a series of stories on the Putin family’s business dealings and being denounced by nationalists as a fifth column in Russian society.

Chernyck remembers how last year he reported from a special session of the Moscow City Duma where the government-backed Russian Institute for Strategic Research was giving evidence about the country’s mounting Aids crisis.

Igor Beloborodov, who co-wrote the institute’s report, blamed condoms for the spread of the virus, stating: “The contraceptive industry is interested in selling their products and encouraging under-aged people to engage in sex.”

Chernyck reported the remarks which were soon picked up in the international press, sparking ridicule, and led to a vicious campaign against Chernyck in state media.

After poring over his personal blog and finding his pictures on social media, government agencies dismissed him as a “liberal journalist” ridiculed him for working with western NGOs, suggested he might be a foreign agent, and said he “looked like a homosexual”.

“The worst thing was that I’m not even a liberal,” he jokes. “I’m a leftist!”