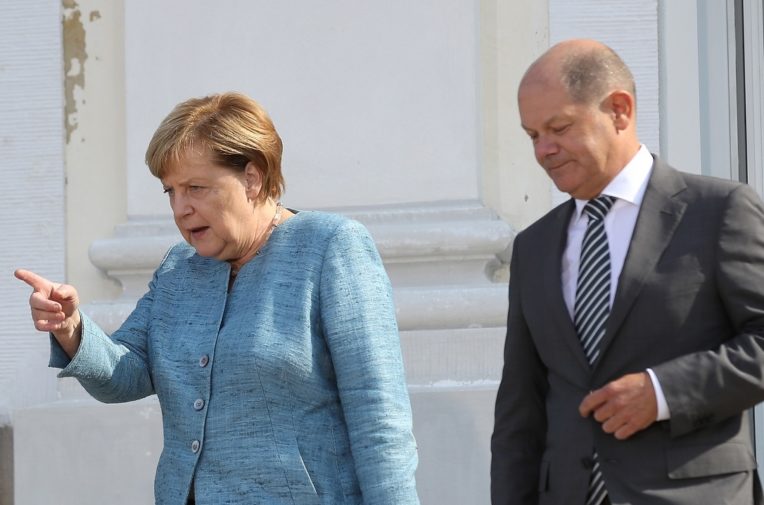 A German finance minister discussed blocking a European Investment Bank proposal to phase out the funding of fossil fuels, Unearthed can reveal.

The discussion was held shortly before the bank moved to delay a decision on phasing out investments in oil, gas and coal in order to support the EU’s climate goals, amidst speculation Germany had lobbied against the move.

According to documents obtained by Unearthed, Sarah Ryglewski, state secretary in Germany’s Ministry of Finance, said at a private committee meeting that discussions were needed “to clarify how a broad exclusion of the promotion of fossil fuels could be reconciled with the energy policy objectives of the EU”.

Gas was important to the EU’s future energy needs, she argued, adding that ensuring the policy met those needs would be “crucially important” for whether or not Germany would support it.

The documents, whose contents were confirmed by two sources present at the meeting, also show that Ryglewski said Italy, Spain, Poland and Eastern European member states are opposed to the proposals and claimed the EU would depend on gas for “at least” two decades.

Ryglewski made the comments in a private meeting of the Bundestag’s Finance Committee on September 25, in which she discussed the EIB’s proposed new energy lending policy.

The EIB lends around €13bn a year to the energy sector. Under the first draft of its new policy, it planned to cease lending to any fossil fuel projects starting at the end of 2020.

This would include natural gas, which produces greenhouse gases when burned.

In a second draft, the EIB weakened the policy slightly, proposing that it would continue to fund some gas heating projects under certain circumstances.

Board members at the bank were due to vote on the new policy earlier this month but, at their meeting, chose to postpone the decision until November 14, when they will vote on a third draft, which has not been published.

Germany is Europe’s biggest consumer of natural gas and is a 16% shareholder in the EIB, giving it an outsized influence over decision-making, along with France, Italy and the UK.

It is represented at the EIB by finance minister Olaf Scholz, who heads up the department in which Ryglewski works.

Both are members of the centre-left Social Democratic Party (SPD), which has run the country as the junior member of a grand coalition with Angela Merkel’s centre-right party, Christian Democratic Union, since 2013.

The former SPD leader and chancellor of Germany Gerhard Schröder has been criticised since leaving politics for his close relationship with the natural gas industry.

Michael Bloss, MEP for the German Greens, told Unearthed: “The German finance minister Scholz is a problem for climate protection in Europe. With his blockade for effective climate protection, he joins the anti-climate alliance among Poland, Czech Republic and other countries.

“It is hypocritical for the German government to acknowledge its commitment to the Paris Agreement but to trigger a new fossil-renaissance at EU level. The Federal Government’s climate standstill must come to an end.”

There has been some speculation that Germany could seek to block the EIB’s plan to phase out funding for natural gas but in public the government has been supportive of ensuring the bank’s lending policy is in line with the Paris Agreement.

In the meeting, Ryglewski said: “Gas will continue to be needed to supplement the supply of renewable energy. With gas still of substantial importance over the next few years, the EU will continue to rely on reliable gas supplies in the future, at least for the next two decades.

“In the further course of the discussion, it will be important to clarify how a broad exclusion of the promotion of fossil fuels could be reconciled with the energy policy objectives of the EU. This would be crucially important for whether or not Germany can support the given draft of the policy.”

Jörg Cezanne, a member of the finance committee and an MP for Die Linke, Germany’s left-wing party, told Unearthed he supported the EIB’s new policy and called the objections on gas “misleading”.

Responding to this story, a spokesperson for the German Finance Ministry said it welcomed the plan to bring the EIB’s lending in line with the Paris Agreement but stressed the importance of getting the timeline right. They argued that the EIB should continue to support infrastructure projects for the transport of natural gas.

They added: “Natural gas, and hence also the necessary associated infrastructure, is expected to make a contribution to achieving climate goals in the short and also medium term.

“As such, it can represent an interim technology until energy production entirely from renewable energy sources is feasible. Having a secure, climate-friendly and diversified system of energy supply is crucial for economic growth in the EU.”

The EIB’s board of directors also discussed the policy at its previous meeting in September.

It has not yet published minutes of this meeting but Ryglewski told the committee that at that meeting, Italy, Spain, Poland and other Eastern European states were also opposed to the EIB’s new plan.

She added that France and Scandinavian member states, on the other hand, are in favour.

This week, EU finance ministers, including Scholz, will also discuss a draft text signed by mid-level representatives of all 28 EU member states calling on the EIB to stop funding fossil fuel projects, according to a report from Reuters.

Earlier this year, the German government gained plaudits from some environmental circles after announcing plans to shut down all 84 of its coal-fired power plants over the next 19 years.

But it has also been criticised for its attitude towards EU efforts to fight climate change. In May, for example, Unearthed revealed that it failed to sign onto a plan to increase climate ambition.

And in March, leaked documents showed that it refused to back a call for an EU-wide net zero emissions target by 2050.

The committee meeting also discussed whether the EIB should fund nuclear projects, with Ryglewski clarifying that the government does not support this.

Cezanne said although they differed over gas, he agreed with the German government that the EIB should expand its policy to stop funding nuclear projects as well.

The German Finance Ministry spokesperson told Unearthed: “The current draft of the new energy lending policy permits, at least theoretically, the financing of nuclear projects, including the construction of new reactors. The German government is working towards achieving a nuclear-free EIB.”

An EIB source told Unearthed that the bank couldn’t comment on individual discussions by board members.