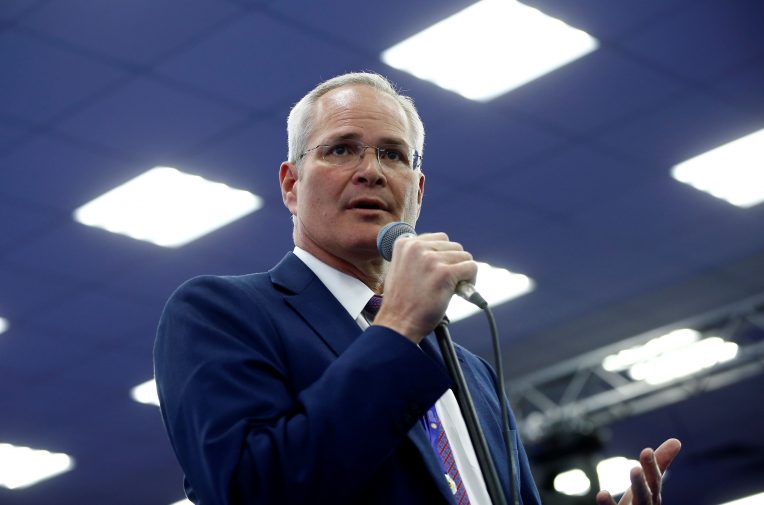 Inside Exxon’s playbook: How the oil giant works through front groups to head-off regulations on toxic chemicals and plastics

Inside Exxon’s playbook: How the oil giant works through front groups to head-off regulations on toxic chemicals and plastics

ExxonMobil ran a behind the scenes US lobbying campaign against legislative efforts to restrict the use of toxic PFAS “forever chemicals”, one of the oil giant’s most senior lobbyists has told an undercover reporter.

Keith McCoy, a senior director of federal relations at Exxon, told a reporter for Unearthed posing as a head-hunter that that the company had conducted a fingerprints-off lobbying push via several trade groups in an effort to stave off tighter regulations on these controversial chemicals.

This included, he said, lobbying Congress “under the guise” of the American Petroleum Institute, one of Exxon’s powerful trade associations.

McCoy explained that, if members of Congress “start talking about how this is an ExxonMobil chemical and ExxonMobil is poisoning our waterways, the debate is pretty much over.”

In a statement responding to Unearthed’s investigation, the company said: “ExxonMobil does not manufacture PFAS.”

These chemicals never deteriorate, you know they stay in the environment forever.

The company later clarified to Channel 4 News: “We do use PFAS in some of our products, and we purchase firefighting foams which contain PFAS for fire safety and suppression at certain facilities.

PFAS (perfluoroalkyl and polyfluoroalkyl substances) are a class of man-made chemicals that are widely used in products ranging from non-stick pans, to make-up, to firefighting foams. They have come under increased scrutiny in the US and globally in response to science linking long-term PFAS exposure to health problems including liver damage, cancer and birth and developmental disorders. They are dubbed “forever chemicals” because they do not break down in the environment.

This – alongside PFAS water contamination scandals like the one depicted in the 2019 Hollywood film Dark Waters – has prompted multiple efforts by US politicians to restrict or more tightly control them.

During a Zoom meeting in May 2021, McCoy claimed that an Exxon-instigated advocacy push had delayed tighter regulations on PFAS by successfully lobbying for a government study of the chemicals. He did not name the study but a budget request by President Biden made a month previously asked for “$75 million to accelerate toxicity studies” into the chemicals.

McCoy also suggested that Exxon – which is the world’s largest producer of single use plastics – was using the same tactics it has deployed to hold back action on climate change to head-off “comprehensive” regulations on plastic in the US.

“You want to get smart on it right, because you know it’s coming,” McCoy said.

“It’s just like on climate change right so when climate change came, well it’s here, but, well, when it started you started to have conversations to say, ‘well you can’t completely change the electric grid from coal and gas into wind and here’s why’.

It is not suggested that Exxon broke any laws in its advocacy regarding chemicals or plastics and its use of a trade association as a front for its lobbying efforts.

Congressman Alan Lowenthal, who represents California in the US House of Representatives, told Unearthed: “These ‘delay, deny and distract’ tactics have been used by these industries for decades in the debate over addressing climate change, just as the tobacco industry did decades before.”

“What is surprising is hearing it right from the horse’s mouth. At the end of the day it all comes down to money. These industries are more than willing to sacrifice public health, frontline communities, and our environment for profit,” he continued.

This story was also reported by

Public concern about PFAS reached new heights last year following the release of the film Dark Waters. The film chronicles the 20-year legal battle to get compensation for the residents of a West Virginia town whose water was contaminated by chemical giant DuPont with perfluorooctanoic acid, also known as ‘C8’, a PFAS it used to make Teflon non-stick coatings.

The use of C8 has now been phased out in US manufacturing, but it remains persistent in the environment and many other PFAS are still in widespread use in the economy.

Dozens of bills have been introduced in the US House and Senate seeking to restrict PFAS and remediate areas contaminated with the chemicals.

Now Unearthed can reveal that, according to one of its lobbyists, ExxonMobil uses products containing forever chemicals, including in firefighting foam – and that the company has worked hard to keep this quiet, while discreetly seeking to influence legislation on PFAS.

McCoy told Unearthed’s undercover reporter: “We use it in our firefighting equipment, so we have pushed our [trade] associations to be out front on that… to say some things about PFAS that we definitely don’t want to be out front talking about.”

McCoy suggested that the company was wary of having its brand associated with the debate over forever chemicals, fearing that this would make its lobbying goals more difficult to achieve.

Much of the debate over PFAS in the last 18 months has centred on its use in firefighting foams that are used to control large fires at US military installations. There is evidence that the chemicals accumulate in the environment after they are washed into drains following fires or training exercises.

They are also used by the oil and gas industry to fight large refinery fires. According to McCoy, Exxon uses foams containing PFAS and also, he suggested, manufactures them.

We go in under the umbrella of API… it’s just associations, no companies.

Unearthed could find no evidence that the company makes the foam, but did establish that the company manufactures and exports a fire-retardant industrial lubricant called Hyjet V, which contains a PFAS called potassium perfluorobutane sulfonate.

McCoy outlined how Exxon worked through trade associations including the American Petroleum Institute and the American Chemistry Council to prevent stricter controls of the use of firefighting foams containing PFAS.

This included lobbying members of Congress “under the guise of API – so we go in under the umbrella of API,” McCoy said, “it’s just associations, no companies.”

McCoy added that one tactic was to “propose a study” to delay legislative action: “Low and behold we got a study, we got it passed and that completely lowered the temperature, there’s been very little talk about PFAS.”

It is unclear which study McCoy was referring to, but a month previously, President Biden requested $75 million to fund “toxicity studies and research to inform the regulatory development of designating PFAS as hazardous substances and setting enforceable limits for PFAS under the Safe Drinking Water Act.”

When asked if anybody knew Exxon made products containing PFAS, McCoy replied: “No.  No.  Nobody… Yeah I mean it’s, the good thing is that, that, the debate isn’t who makes it.”

He added that, while the product was not big business for Exxon, it was probably worth “a few hundred million,” which was “enough that it gets our attention.”

“PFAS are a diverse family of chemicals found in a variety of important commercial and industrial products in most industries, including medical, technology, communications and textiles,” an Exxon spokesperson told Channel 4 News.

McCoy also claimed ExxonMobil was working hard to head off regulations on plastics, which are a huge source of profit for the company.

During Exxon’s annual general meeting in May, its CEO, Darren Woods, was questioned about a report showing that Exxon is the world’s largest producer of single-use plastic waste.

We’re hoping to be able to come up with, if not solutions at least some… talking points to have with members of Congress

“We share society’s concerns about plastic waste and agree that it has to be addressed,” Woods responded, before going on to explain his view that that there were no sustainable alternatives to plastic.

“So I think there’s opportunities to improve on the waste handling and to improve on recycling the plastic, both areas we’re very, very focused on,” he added, identifying a project at its Baytown plant to recycle plastics.

According to McCoy, the firms arguments on plastics come from the same playbook Exxon used to delay action on climate change: “You, you want to get smart on it right because you know it’s coming so you want to get, it’s just like on climate change right… when it started you started to have conversations to say well you can’t completely change the electric grid from coal and gas into wind and here’s why.  It’s the same conversation, you can’t ban plastics because here’s why or you can’t recycle you know, legislate 100% recycling, because here’s why,” he continued.

McCoy added that if the company could not find solutions to the recycling problem it would at least find some talking points to raise with politicians as part of this lobbying effort: “We’re doing the research, we’re looking at our markets, we’re, we’re looking at the chemistry and we’re hoping to be able to come up with, with, if not solutions at least some reasons and some talking points to have with members of Congress.”

Congressman Alan Lowenthal told Unearthed: “If we do not act to limit the use of unsustainable single use plastics this issue will only get worse.”

“The oil and gas and petrochemical industries have not made it a secret that they are working to dramatically expand the production of plastics and petrochemicals, in no small part, to make up for the lost revenue these industries expect to lose from the reduction of fossil fuels… in the shift to a green economy,” he continued.

Exxon said in its statement: “Of course, we take the issue of plastic waste management very seriously. ExxonMobil is addressing plastic waste by increasing recyclability, supporting improvements in waste recovery – for example, through our founding membership in the Alliance to End Plastic Waste.

“ExxonMobil has completed an initial phase trial of a proprietary advanced recycling process for converting plastic waste into raw materials for production of high-value polymers. The trial, at the company’s existing facilities in Baytown, Texas, marks another step in ExxonMobil’s efforts to help reduce plastic waste in the environment and maximize resource recovery.”

The company also works closely with its trade association, the American Chemistry Council, McCoy said, to put forward model legislation on issues related to its plastics business, as an alternative to legislation from “progressive” politicians.

McCoy added that ExxonMobil would prefer legislation to come from industry than a “comprehensive piece of plastics legislation” put forward by progressive elected officials.

“Our work requires us to engage with a diverse set of stakeholders – from policymakers to civil society, to the broader business community, including those like-minded, and not. Our positions are public and on the record”, she continued.