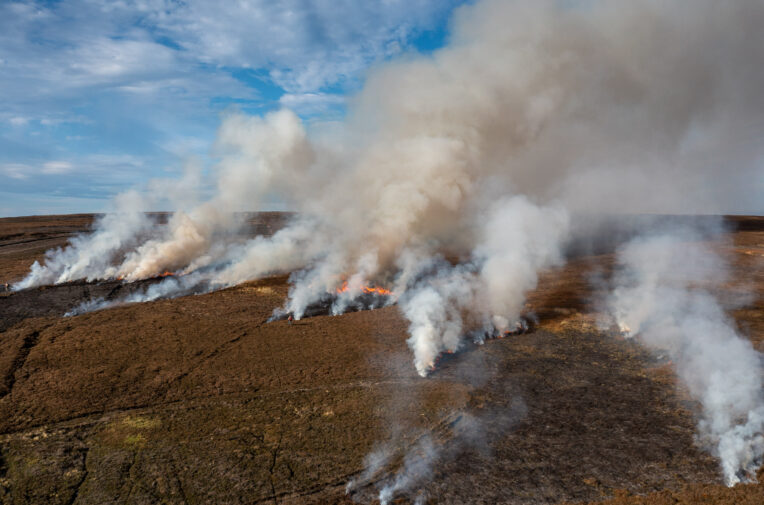 The burning of heather, a plant found on grouse-shooting estates, is happening in spite of a partial government ban, which does not cover most of England's peatlands

The burning of heather, a plant found on grouse-shooting estates, is happening in spite of a partial government ban, which does not cover most of England's peatlands

More than 100 fires have been reported on Northern England’s carbon-rich peatlands – mostly in national parks – just weeks before the government is set to host COP26,  a landmark international climate change summit held in Glasgow.

Heather is deliberately burned on grouse-shooting estates in the winter months to maintain the ecosystem for grouse hunting, a British field sport.

The 109 fires, all reported by activists for the group Wild Moors since Thursday evening, have been lit in spite of a partial government ban in England and Wales, which came into force in May.  The vast majority of the fires have been set on shallow peatlands, which are not covered by the ban. Multiple fires often occur on the same estate.

Unearthed has verified several of the fires – on the North York moors – where we recorded drone footage, but have not verified the full dataset. We have also spot-checked some of the co-ordinates provided by volunteers against government peatland maps.

The UK’s peatlands are its biggest natural terrestrial carbon store and are also globally significant as they are home to 13% of the world’s blanket bog, a rare type of peatland found in the British uplands. Restoring them must be a “top priority” if the UK is to reach net zero emissions by 2050, according to a report published in April by the government’s conservation watchdog.

Richard Lindsay, head of Environmental and Conservation Research at the University of East London, told Unearthed: “It’s difficult to see how the UK government – which as the chair of COP is speaking for the world at the moment – can call on governments such as Indonesia and Malaysia to stop burning its peatlands when the hills in the UK are aflame simply in the name of sport.”

This story was also reported by

Most of the sightings were in Northern England’s national parks: the North York Moors, the Peak District and the Yorkshire Dales. Other reports came in from the Pennines in Lancashire and Northumberland.

The vast majority of these fires will not fall within the remit of the government’s ban, which contains a number of loopholes. It covers peat that is more than 40cm deep and on protected land: on a site of special scientific interest (SSSI) and in a special area of conservation (SAC) or special protection area (SPA). Exemptions are also made if the land is steep or rocky or if a licence has been issued. This equates to 8% of the peatland in England and a maximum of 31% of blanket bog, according to estimates by environmental coalition group Wildlife and Countryside Link.

Lindsay, who has worked in peatland conservation for 45 years, told Unearthed that there is no scientific reason to restrict the ban to peatlands deeper than 40cm: “Our shallow peatlands are actually more vulnerable, more damaged and at least as extensive as our deep peatlands. It doesn’t take much of a fire to burn 30cm of peat completely – and it can contain as much carbon as a hectare of tropical rainforest.”

The Climate Change Committee, the government’s independent climate advisors, recommends that all rotational burning on UK peatlands is banned in order to reach net zero. Peatlands also perform other roles in an ecosystem, including protection from floods and the maintenance of water quality.

Olivia Blake MP, Labour shadow minister for nature, water and flooding, told Unearthed: “Protecting and restoring peatlands and the biodiversity they shelter is fundamental to meeting our net-zero obligations and tackling the climate crisis. Less-than-half-measures are not good enough.

“The Climate Change Committee is clear that there’s no time to waste; we need action now to stop the burns on all our peatlands, reverse the decline of these precious habitats, and ensure that we rise to the urgent challenge of the climate emergency.”

Moorland owners on the other hand say that burning is managed and that an ecosystem managed for grouse-shooting can benefit other species and bring in millions to rural economies.

Amanda Anderson, director of the Moorland Association, said: “Heather burning is a perfectly legal land management tool. Burning is permitted between October and April on shallow peat and in very exceptional circumstances on deeper peat. Burning is only undertaken at the right place at the right time and for the right reason.

“Controlled burning does not damage peatland as the technique burns the heather but not the peat below it. Current scientific evidence that has been provided to government demonstrates that burning can have positive longer-term effects on carbon capture. There is no evidence whatsoever that any legislation has been contravened to date nor evidence that burning is being carried out to anything but best practice standards.”

Lindsay told Unearthed that “it’s not practical to say you can burn the heather without damaging the peat surface” because the surface is uneven.

A spokesperson for the Department of environment, food and rural affairs (Defra) told Unearthed:

“We have always been clear of the need to phase out rotational burning of protected blanket bog – which is why we have brought forward legislation to protect these vital habitats from harm whilst ensuring landowners and managers have the tools available to protect and restore them to their natural state.

“This represents a crucial step in meeting the Government’s nature and climate change targets, including the legally binding commitment to reach net zero carbon emissions.

However, we can only rise to the challenges of the climate crisis by working together. At COP26 we will bring countries together to encourage them to protect and restore ecosystems to help tackle the urgent threat of global climate change.”