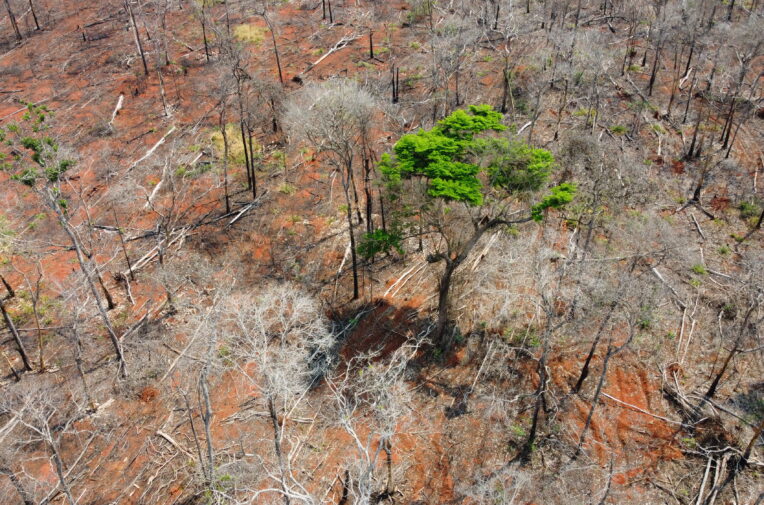 Deforestation up close: a surreal journey through Brazil’s soya heartlands

Deforestation up close: a surreal journey through Brazil’s soya heartlands

We set off early, heading north on the BR163, a federal highway that slices more than 4,000km through Brazil, from north to south.

Once, the landscape on either side of this stretch of road would all have been Cerrado, a tropical savannah that covered an area roughly the size of western Europe. Today, just half of that wilderness remains.

The ground is littered with charred tree trunks; a couple of vultures circle overhead. The earth is a murky grey-orange: ash ground into the distinctive reddish sandy soil found in this region.

Our first stop is Fazenda Natureza Feliz – Happy Nature Farm – in the municipality of Sapezal. Satellite images show more than 10 sq km of forest within the boundaries of the property has been cleared since 2019. The land is owned by a man named Carlos Simonetti and leased by Grupo Scheffer, a Brazilian agribusiness whose products are traded on global markets.

We turn off the main road and drive for about 6km on a vivid orange dirt track. The roar of trucks subsides and we can hear birdsong and the mechanical buzz of cicadas. We’re looking for a couple of recent firespots flagged by the team in London. There’s no missing it: we crest a hill and a huge burnt area appears in front of us. The ground is littered with charred tree trunks; a couple of vultures circle overhead. The earth is a murky grey-orange: ash ground into the distinctive reddish sandy soil found in this region.

We stop the car and are surveying the scene, slightly shell-shocked, when a gleaming white pickup truck approaches. A tall, imposing man hops down. With a crisp pink shirt tucked into his jeans and wavy salt-and-pepper hair, he wouldn’t look out of place in São Paulo’s wealthiest neighbourhoods. It is Simonetti, the owner.

He is not happy to see us there. Technically the dirt road is public, but it’s clear we’re investigating his property. “I want to know who you are. Understand?” he barks. He tells us he has deforestation licences and that we can’t be here without authorisation.

Later, when I’m back in São Paulo, I call Simonetti, and he sends me his licences. In the Cerrado, there is a massive amount of destruction that is perfectly within the law.

Simonetti tells me he grows soya with Grupo Scheffer on his neighbouring farm, Fazenda Simonetti, and raises cattle on Natureza Feliz. When one of my colleagues contacts Grupo Scheffer about this deforestation, the company tells us: “The hot spots detected in the property are located outside the perimeters managed by Scheffer.”

We get back in the car and start to drive – but we still need images of that burned-out tract of Cerrado woodland.

Once Simonetti’s truck is out of sight, we stop again. My colleague sends the drone aloft for video images while I squint at the horizon, palms sweating, watching for the cloud of orange dust that indicates someone is coming. We’re lucky this time.

We spend that night in the area. I’m struck by two things in soya boomtowns like Sapezal. First, we see little commercial life that isn’t linked to agriculture. The main drags are lined by businesses dealing in tractors, fuel, seeds, pesticides, spare parts and agricultural consultancy.

Towns are neatly laid out on grids and wide avenues, and “help wanted” signs are plentiful. This part of Brazil is thriving, and it’s easy to see why locals tend to support agribusiness.

The second is that we see no homeless people, and no favelas. Favelas are areas of unregulated housing built on vacant land by those without access to the formal housing market, and are often found in other Brazilian towns and cities. Some favelas are decades old, sturdily built and well established, but many lack basic services and sanitation. In São Paulo, favelas ring the city; in Rio, they are clustered on hills.

Since the pandemic began, many Brazilians have struggled: a survey conducted in December 2020 estimated 19 million people were facing severe food insecurity, nearly twice as many as in 2018. In Brazil’s big cities, the shift is conspicuous. It is common to see families outside supermarkets begging for nappies and rice. At São Paulo’s traffic lights, children dart from car to car, selling sweets or asking for change.

But not here in the soya-growing state of Mato Grosso. Towns are neatly laid out on grids and wide avenues, and “help wanted” signs are plentiful. This part of Brazil is thriving, and it’s easy to see why locals tend to support agribusiness.

The following day we drive to União do Sul, 730km north-east. Every so often, president Jair Bolsonaro grins down from a billboard. Support for him runs high here. In the 2018 election, he won almost 80% of the vote in booming Sinop, the region’s prosperous flagship town, with its universities, orderly parks and upmarket shops. His plain-speaking dismissal of environmental concerns and promises to improve infrastructure earns him fans here, where people can feel unfairly maligned by conservationists for their hard work that transforms forests into profit.

Over the 10-hour drive, the landscape changes. The plantations are still vast but the vegetation is taller, lusher and denser. It smells different too – damp and loamy. We’re in Amazon transition forest now. We pass more cattle fields here: pasture is usually the first plant sown on deforested land. Once it has been cleared and grazed for a few years, the land can be sold on to crop farmers at a much higher price. Large ostrich-like rheas, native to the region, strut alongside skinny white cows. We see little other wildlife.

After a night in União do Sul, we head to a farm named Santa Tereza, where fires were spotted in June this year. We drive down another bumpy dirt road for about 29km, through dense jungle. Our first attempted route takes us to a guardhouse. We turn back and try to reach the GPS points a different way.

We pass an enormous area of recently burned land, with deforestation licences displayed prominently. It’s about 8 sq km and presents a jarring contrast of blackened stumps with lush, vivid forest. We stop and film; it’s not the farm we were looking for, but it’s important to show the scale of legal deforestation here. It’s a Sunday, so no one is around to see us.

Santa Tereza is ringed by impenetrable forest; the closest we can get is about 6km away. Luckily there’s no wind, so my colleague is able to get the drone footage we need. Grupo Scheffer, which owns the farm, says it is “not the perpetrator of the degradation” but acquired it with existing environmental damage.

Our reporting finished, we breathe a sigh of relief and drive to prosperous Sinop, where we leave from its tiny, immaculate airport. I’m familiar with satellite images of deforestation but seeing it first-hand – cattle grazing among charred tree stumps, songbirds flitting between scorched leafless boughs, the next frontier exposed and vulnerable at the new field’s edge – has been sobering. As the plane lifts into the air, Mato Grosso’s patchwork of forest and farm spreads out below. From this height, the farms look to be winning the battle.