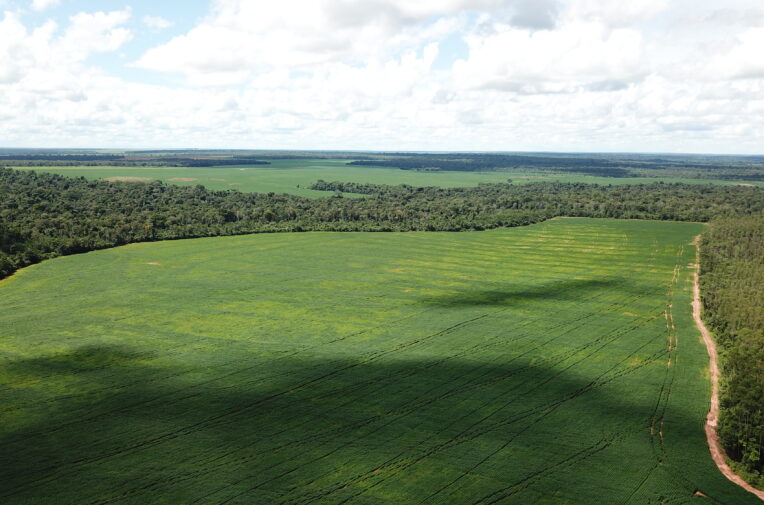 International trader Cargill, which exports Brazilian soya to the UK for animal feed, has sourced crops from a farm growing soya on cleared Amazon land

International trader Cargill, which exports Brazilian soya to the UK for animal feed, has sourced crops from a farm growing soya on cleared Amazon land

A major supplier of animal feed is still buying soya and corn from a farm linked to the destruction of the Amazon rainforest, despite pledging to clean up its global supply chains.

Cargill, a giant agricultural multinational that sells feed to British chicken farms, has been buying crops from a farm growing soya beans on deforested land in the Brazilian Amazon.

An investigation by Unearthed, the Bureau of Investigative Journalism, Repórter Brasil and Ecostorm uncovered Cargill’s links with the Brazilian supplier farm, Fazenda Conquista.

The farm has been linked to an estimated 8 sq km of deforestation since 2013, with multiple fires recorded in 2020. Fires are a known method of clearing land for crops. Conquista’s trading with Cargill has included supplying soya and the farm has signed a deal to deliver 5,700 tonnes of corn to the company this year. It is not known whether the crops in question were grown on a recently deforested part of the farm.

The findings raise questions about the effectiveness of Cargill’s due diligence process. The company has pledged not to buy soya beans from land deforested in the Amazon after 2008, and last year committed to moving faster to eliminate deforestation in supply chains.

But Cargill has also been repeatedly linked to farms engaging in deforestation. In 2020, Unearthed and TBIJ revealed 800 sq km of deforestation and 12,000 fires since 2015 on land used by Cargill soya suppliers in the Cerrado, another protected biome in Brazil.

This story is also reported by

The company exports at least a hundred thousand tonnes of Brazilian soya to the UK each year for use in animal feed.

Campaigners said the findings highlighted the hidden environmental costs of cheap meat. “Meat chickens are the most intensively farmed animals in the UK with over a billion slaughtered each year,” said Lindsay Duncan, farming campaigns manager at World Animal Protection UK.

As much as 80% of all soya grown across the world is fed to livestock. The UK imported about 3.5 million tonnes of soybeans in 2019, much of it ending up in chicken feed.

About a quarter of the UK’s imported soya comes from Brazil. The vast majority of soya imported to the UK is traded by Cargill.

Cargill said: “We are committed to eliminating deforestation from our supply chains in the shortest possible time, and we are accelerating our efforts.” Responding to the findings about Fazenda Conquista, the statement went on: “If fire has been used and has impacted the native forest or any irregularity is confirmed, we will take the appropriate measures.”

The state of the land in question before 2013 is disputed: Fazenda Conquista’s management said in a statement that the farm had permission from Sema, the local environmental agency, to carry out a “controlled burn” on the land because it had originally been deforested in the 1980s.

However, satellite imagery shows that the forest had grown back in the intervening decades and as such, Brazil’s deforestation monitoring programme flagged the clearing in 2013 as deforestation.

Sema confirmed it had authorised burning on the farm in 2012 and 2013 to clear overgrown pasture, but said that no licenses had been given for full deforestation inside the farm. The agency admitted it had not had access to high-resolution satellite imagery prior to 2019 to identify real-time deforestation and that a recent analysis suggested that there had been deforestation on the farm, which it said it would investigate further.

In an independent analysis of satellite imagery, Aidenvironment, an NGO, also characterised the clearing as deforestation but agreed that there had been earlier original deforestation. This year the farm is scheduled to be blacklisted under the Soy Moratorium, a voluntary industry agreement that bars the trade in soybeans on Amazon land deforested after 2008. The Working Group for Soya, which oversees the moratorium, said it had identified an area it said was deforested that had been sown with soya in the last planting season.

A TBIJ reporter visited the farm this year and saw soya beans growing on the land.

Destruction of the Amazon rainforest has serious consequences for the climate, with experts fearing the biome might soon cross a “tipping point” at which it begins to shift from lush rainforest into a drier savannah, releasing large quantities of stored carbon into the atmosphere.

According to Brazil’s space agency, Amazon deforestation soared 22% in the 12 months to July last year.