The wind turbine rises: Are kites and planes the future of wind energy? 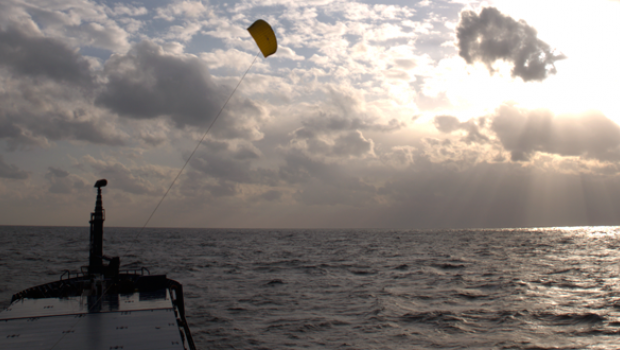 Wind energy as it is today, both onshore and offshore, has a problem. It misses most of the wind.

Most of the energy which flows around the planet as wind isn’t near the ground, or even above the ocean, it’s way up in the sky where — some research suggests — constant winds could meet the world’s energy needs and cut the cost of power.

It’s not surprising people are trying to harness it.

According to the Airborne Wind Energy Group, there are nearly 50 commercial high-altitude wind energy projects in development, including Google’s secretive Makani Power.

In May 2017 – when we updated this Unearthed classic – the UK gave the greenlight to the world’s first kite-powered windfarm, in which 20 giant kites are set to soar higher than Britain’s tallest building in search of stronger winds.

Three years earlier, in 2014, the most visible high-altitude wind power project was a blimp-like turbine in Alaska which produced a viral video.

And you can see why: It’s cool, like something out of of science fiction. But is it the real deal?

Let’s start with offshore wind, a much more straightforward technology, which for years suffered extreme cost penalties for operating in deep waters.

Recent tech breakthroughs (look how big the blades are!) and significant political buy-in have seen costs plummet to the point where it’s cheaper than new nuclear power, and nearly cost-competitive with other types of energy.

Now every one of the prospective high-altitude wind energy technologies is far more complex than that, but the reward could make that complexity worthwhile.

Winds at high-altitude have, on average, twice the velocity of those near ground level, with up to eight times the power density.

“There is enough energy in high altitude winds to power civilization 100 times over,” wrote Professor Ken Caldeira of Stanford University in his research paper.

Other peer-reviewed papers estimate it could reduce the cost of wind energy ten-fold.

So if this technology were to arrive in earnest, it could make a serious impact on the global energy market.

Many of world’s AWE projects started in the mid-2000s and are now entering the testing stages ahead. So does the future of wind energy look like Altaeros, the blimpy project of Youtube fame?

Perhaps not. Whilst the Altaeros BAT is one of the best known (it shows up top on Google, ahead of even Google’s own high-altitude wind project), it is only one of a several technologies in the sector.

Balloon – It’s under the banner of balloon technology that Altaeros falls.

A turbine, designed to be much lighter than those on traditional towers, is lifted by a balloon or blimp to the higher reaches of the sky and kept in place by tethers on which the generated power travels.

Kite – Lifted into the higher skies via a kite steering unit, the kite is moved to optimum wind conditions as it sends the acquired kinetic energy to a ground generation station.

The UK’s just-greenlit project, to be built by Wind Power Systems following a successful test, suggests this is the model to beat.

Kytoon – The fantastically named cross of a heavier-than-air kite and a lighter-than-air balloon.

The key benefit of this hybrid is stability; it is lifted by its kite components and maintains its position due to balloon buoyancy.

Tethered Autogen – Largely patented by Google, the Autogen is a contraption akin to a wind copter.

“We’re really leaping beyond what you can get with the traditional tower based turbines, and because of that we’re able to produce energy at a much higher capacity factor,” Ben Glass, the MIT graduate who co-founded Altaeros, told Unearthed.

Capacity factor, the bane of renewable energy, essentially means the wind only blows some of the time, and therefore requires investment in interconnected grids and backup power. A 2009 report put the average factor for renewables at 33%.

“We often compare the BAT against a 100 kilowatt wind tower turbine that’s fairly popular, and which has a capacity factor in the 20 to 25% range. We’re producing energy at a capacity factor of 50 to 65%, which is twice as much.” Indeed, it’s almost as much as some fossil fuel plants.

How exactly does the Altaeros BAT work?

The balloon, filled with helium, lifts the turbine placed in its centre to about 600 metres. The structure is held in place by three tethers, one of which is electro-mechanical and used to transfer the power from the turbine to the ground station. The turbine itself is a lot like the big horizontal axis turbines we’re used seeing to on towers, with the key difference is that it’s much lighter.

Glass says Altaeros has a specific market in mind for the BAT: “We’re developing the product pretty focused on the remote power market, basically any place that’s using diesel gen sets. This can be remote communities like you have in Alaska, it can be disaster relief where your main power infrastructure is knocked out, or it could be remote industrial areas.”

In those areas high altitude wind will be competing with diesel and Glass says it could prove to be more than three times cheaper.

Whilst cost is always a key consideration, for these remote areas so is access. Part of the Altaeros balloon design is for portability.

“For this system, because it’s a large inflatable structure, it actually packs down very small and we’re able to ship it in a couple of standard shipping containers basically to any site in the world and set up within a day or two.”

Over in California, there is Makani Power, recently acquired by Google X, the tech giant’s top-secret innovations division. 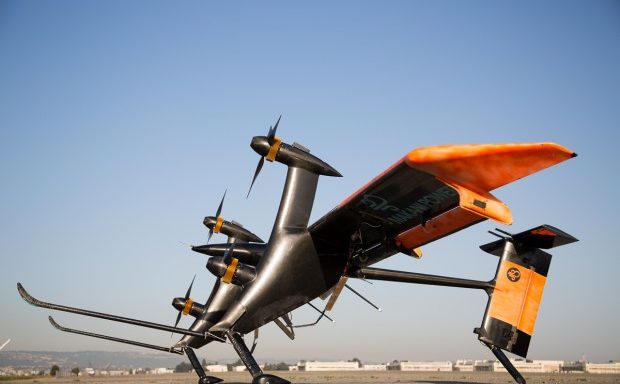 The Makani technology is essentially a tethered aircraft, a sophisticated kite-wing with built-in wind turbines. As is their MO, X wouldn’t talk to us about their tech.

“The Americans are more focused on airborne generation,” said Marcello Corongiu, Programme Manager of Italy’s KiteGen, “whilst in Europe, we are mostly committed to on-ground generation.”

He theorised that American companies tend towards air generation because of the abundance of patents already issued for on-ground generation technology.

“Is high-altitude the future of wind energy?” Corogniu asked, “I would go one further and say it is the future of electrical production.”

“High-altitude wind is an enormous reservoir of energy, the second biggest energy flow after sun radiation. It also highly exploitable without causing environmental issues, as a recent study found 1800 terrawatts can be generated without impacting the climate.”

Another study, however, claims that extracting any more than 7.5 terrawatts could cause a climate catastrophe.

The German researchers concluded that “jet stream wind power does not have the potential to become a signiﬁcant source of renewable energy.”

But let’s get back to KiteGen. It is one of the world’s kite tech big-wigs, with more patents than any other company in the sector (37). 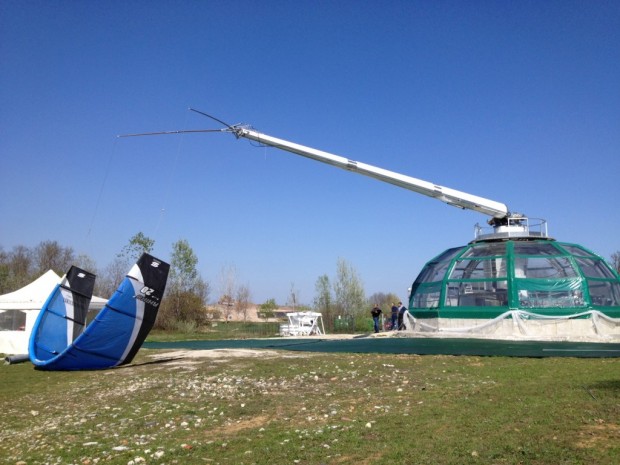 A recent partnership with Saudi Arabia Basic Industries (SABIC) has seen the development of two industrial generators ready for testing this autumn.

Whether that will happen, however, hinges on KiteGen’s ability to navigate the country’s bureaucratic labyrinth.

The KiteGen technology was conceived as a clever (we hope) generator that controls kites extended on multi-function cables. The system uses climate sensors to inform its management of the kites – optimising speed and torque, and also the flight path.

The last year has seen a major redesign — after the firm ran into some problems.

“We asked a manufacturer to make a kit for us of about 50 square metres, but we broke it in 10 minutes. The material is not robust enough for bear the high-altitude forces. Our new wing, which has aeronautical and structural integrity, is about 100 square metres.”

Mike Barnard of Cleantechnica earlier this year poked holes in kite-tech, writing that the system  is “fraught with failure conditions”.

According to Barnard, the semi-flex wing to which KiteGen have moved “increases complexity and weight in the air” which then increases chances of failure and reduces efficiency.

The kite model, says Corongiu, is designed work with the particular conditions of high-altitude where stationary turbines cannot — because it would be too expensive to build them that high.

The success of the sector will be measured in what it does to energy costs, and KiteGen, like its rivals is astoundingly optimistic: “We expect a levelised energy cost of less than €20 per megawatt per hour, much less than all present energy technology except for some hydroelectric.” Less, in fact, than coal.

“Wind in higher altitudes is more stable and stronger, so there’s more to harvest,” explained Stephan Wrage, Managing Director of SkySails, “And the floating AWE turbines are much easier and cheaper to produce and install than conventional wind turbines.”

In his brutally comprehensive assessment of the sector, Barnard said it suffered for lack of harmonious design: “As soon as you start engineering an airborne solution to harvest that energy, the compromises strip away the potential bit-by-bit until it just isn’t viable in any incarnation so far attempted.”

But the wind energy sector has grown more than any other renewable in recent years.

These projects have yet to arrive, and they certainly won’t be the finished article when they do.

There is great potential for the sector in the years ahead; that vast expanse of energy gold above our heads is waiting to mined, and there is an ever-growing number of people and organisations committed to doing just that.

Update: Using data from AWEC, this article originally estimated the number of projects at over 100, but has since changed that figure and infographic to reflect the 46 commercial and academic projects in operation according to a study from Springer Berlin Heidelberg.

Update 2: KiteGen has responded to the study from the Max Planck Institute that warned against AWE, calling it “superficial and substantially wrong”

Update 3: In May 2017 the UK gave the greenlight to the world’s first kite windfarm so I updated some of the stats