UK government censors its own report on the ‘impacts of fracking’ 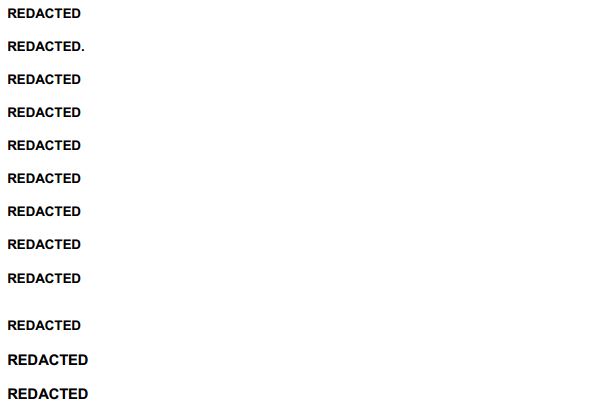 The government has stumbled into a censorship row after the Department of Environment, Food and Rural Affairs (DEFRA) redacted significant portions of a report on the potential impacts of shale gas exploration on rural communities.

Despite the blacking out of passages that DEFRA claims may jeopardise a balanced public discussion on the merits of fracking, the report has a few interesting tidbits.

There’s the fact that one of the “three major social impacts” of fracking is entirely redacted, and that a health policy report was likely redacted also, and that house prices may fall and rural services fail, and also that certain estimates suggest the industry may not be commercially viable.

Here’s what we learned:

It’s hard to overstate quite how ridiculously redacted this report is. A sizeable chunk of the Executive Summary is undisclosed, as is most of the report’s intro and conclusion. It is, however, the social impacts outlined in section 3 that really suffer for DEFRA’s liberal use of the redaction action.

That’s right, one of the three major social impacts is entirely omitted. In its place appears the word REDACTED 14 times.

In a letter accompanying the report, DEFRA explained the frequency with which the dreaded R-word appears: “There is a strong public interest in withholding the information because it is important that officials can consider implications of potential impacts and scenarios around the development of the shale gas industry and to develop options without the risk that disclosure of early thinking could close down discussion.”

Green Party MP Caroline Lucas told the BBC’s Today programme: “The number of redactions would be almost comical if it weren’t so concerning. What are the economic, social and environment impacts and effects upon housing and local services, agriculture and tourism that the government is so keen to withhold from us? The implications of fracking for rural communities are vast. It is critical the public knows the facts: absolute transparency is essential – censorship should not be an option.”

Browsing the report’s annex, Unearthed found a reference to a report on health policy issues related to shale gas extraction and yet there’s no mention of health, safety or any of that stuff in the content of the report. Perhaps fracking health hazards were victims of redaction.

The New Solutions study takes a comprehensive look at the health issues that have emerged from fracking the in US, from groundwater contamination to air pollution to noise pollution and other quality of life hazards to climate change consequences. In its editorial introduction, the authors declare: “We believe, however, that enough evidence has been provided in support of taking extraordinary caution during all phases of shale gas operations.”

House prices down, rural residents up

Of the social impacts that the report ruled acceptable to publish, people are especially intrigued by the thesis that property prices will fall for those neighbouring fracking sites.

The report refers to a 2010 study in Texas that saw a decrease in housing value of between 3 and 14 per cent for properties within 1,000 feet of a well site. It also cites a study in Pittsburgh which explains how properties within a mile of a fracking site lost an average value of 5.6 per cent.

The other social impact is predicated on the theory that loads of people, hired to work on rural fracking sites, will move their family’s nearby. Assuming that some rural populations explode, local services like doctors and dentists may be overwhelmed by the increased demands.

It’s not all doom and gloom, as the report compares 4 different studies on the potential impacts (both good and bad) of the growing fracking industry.

How many full time jobs will the fracking sector create? Cuadrilla’s conservative estimate places it at 5,600 whilst the Institute of Directors optimistically claim it could reach 74,000. Not one to play favourites, DECC staked out the middle ground of between 16,000 to 32,000, which would increase the number employed by the oil and gas sector by 7 per cent.

But the amount of recoverable natural gas doesn’t sound too impressive, according to this draft report.

The Environment Agency commissioned Ricardo to calculate gas production hypotheticals. It’s high scenario is “highly unlikely occur due to environmental and regulatory differences between the UK and US; their low scenario, on the other hand, is “unlikely to be viable.”

So that leaves the mid scenario which would peak at 9.8 billion m3 per year, which is 11 per cent of the UK’s current natural gas demand.

And DEFRA wrongly states that the IOD attests that the industry could only produce 0.9 billion m3 per annum, below even Ricardo’s low scenario. Unearthed doesn’t know how DEFRA came up with the figure, because the IOD’s projections are far higher than that.

If one thing is certain, however, it is that shale gas won’t be arriving in earnest until the 2020s, all four reports agree.