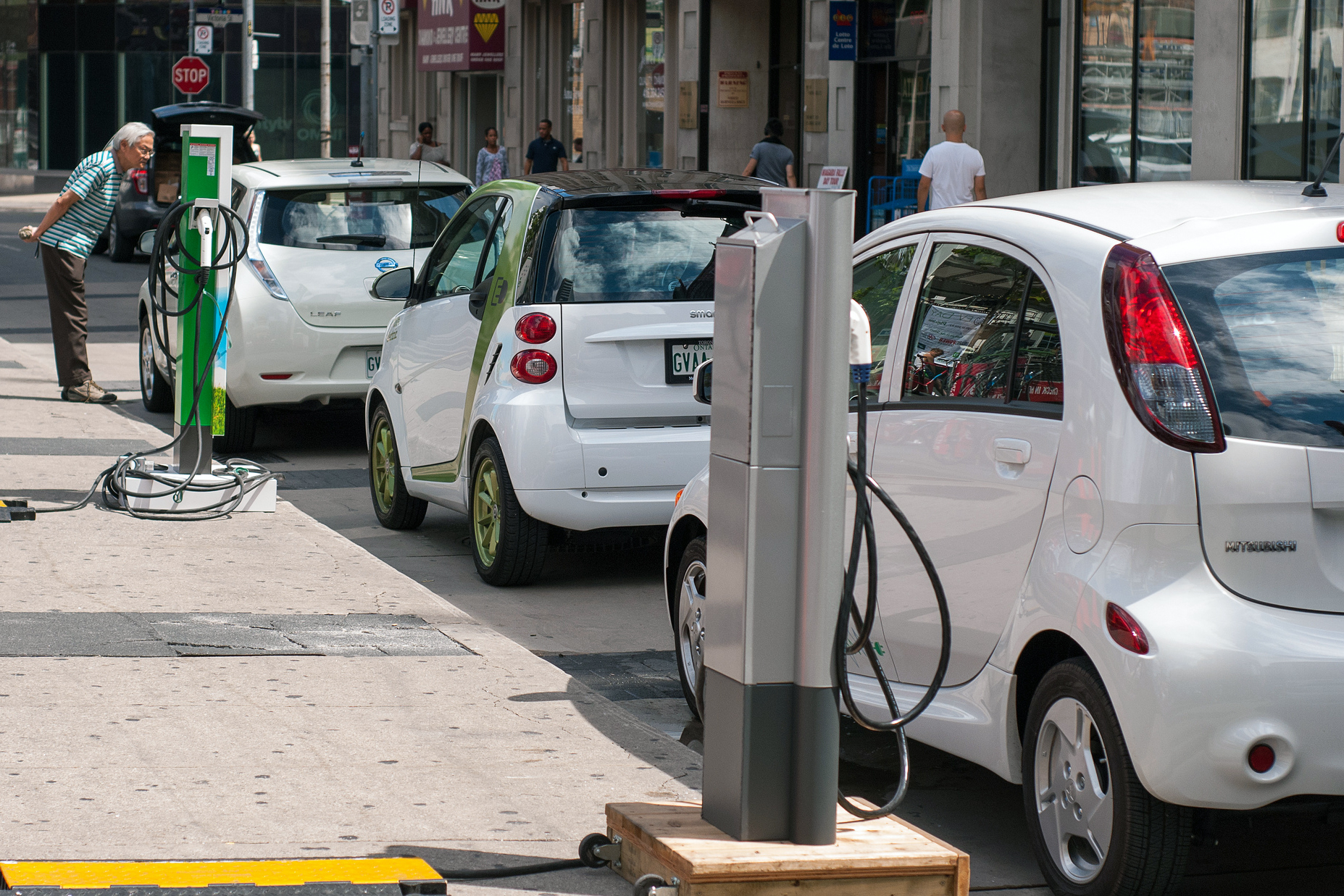 The oil industry and oil trade associations in California spent millions of dollars last year to kill off legislation that would have meant the significant take-up of electric vehicles in the state.

Global brands – including BP, Shell, Exxon and Chevron – local oil and gas companies and trade bodies, spent more than $22 million (£15 million) on lobbying in California last year – a record – according to official figures.

Spending spiked in the third quarter of the year, when the Clean Energy and Pollution Reduction Act (SB 350), was being considered.

During that summer there was also a rather blatant campaign spreading fear-mongering rumours about what the law entailed for car users.

This would have meant lift off for the electrification of the transport sector in California and would have been the equivalent of removing 36 million (non-electric) cars and trucks from the road.

The lobbying comes as oil majors scramble to present a future in which electrification plays little or no role. In its most recent energy forecasts BP predicted almost nobody will drive an electric car even by 2035.

Chevron, BP, Shell and Exxon all increased their spending in the July to September period — Chevron spent $1.8 million over the summer.

But the biggest lobbying splurge at that time was by the Western States Petroleum Association (WSPA), the most powerful oil lobby in the region. Shell, BP, Chevron, and ExxonMobil are among its members.

After the key clause was removed spending returned back to base levels. Clean energy lobbyists were also spending while the Californian Legislature was cogitating over the bill – but as the LA Times points out their lobbying firepower was much smaller. A climate advocacy organization called NextGen Climate Action spent $1.2 million advocating for the bill. Misinformation campaign It’s hard to know exactly where the WSPA money went. The vast majority of their big spend – more than $6 million – over the summer was filed under “Other Payments to Influence”. What does this mean? We don’t really know, and that’s likely the whole point. It could be that WSPA was using those millions to fund its anti-EV campaign. In 2014 the trade body was busted – through a leaked powerpoint presentation –  for orchestrating a campaign involving fake ‘grassroots’ front groups protesting against the possible implementation of a climate emissions law (AB 32). (A slide from the deck, which Unearthed has seen, shown below.) 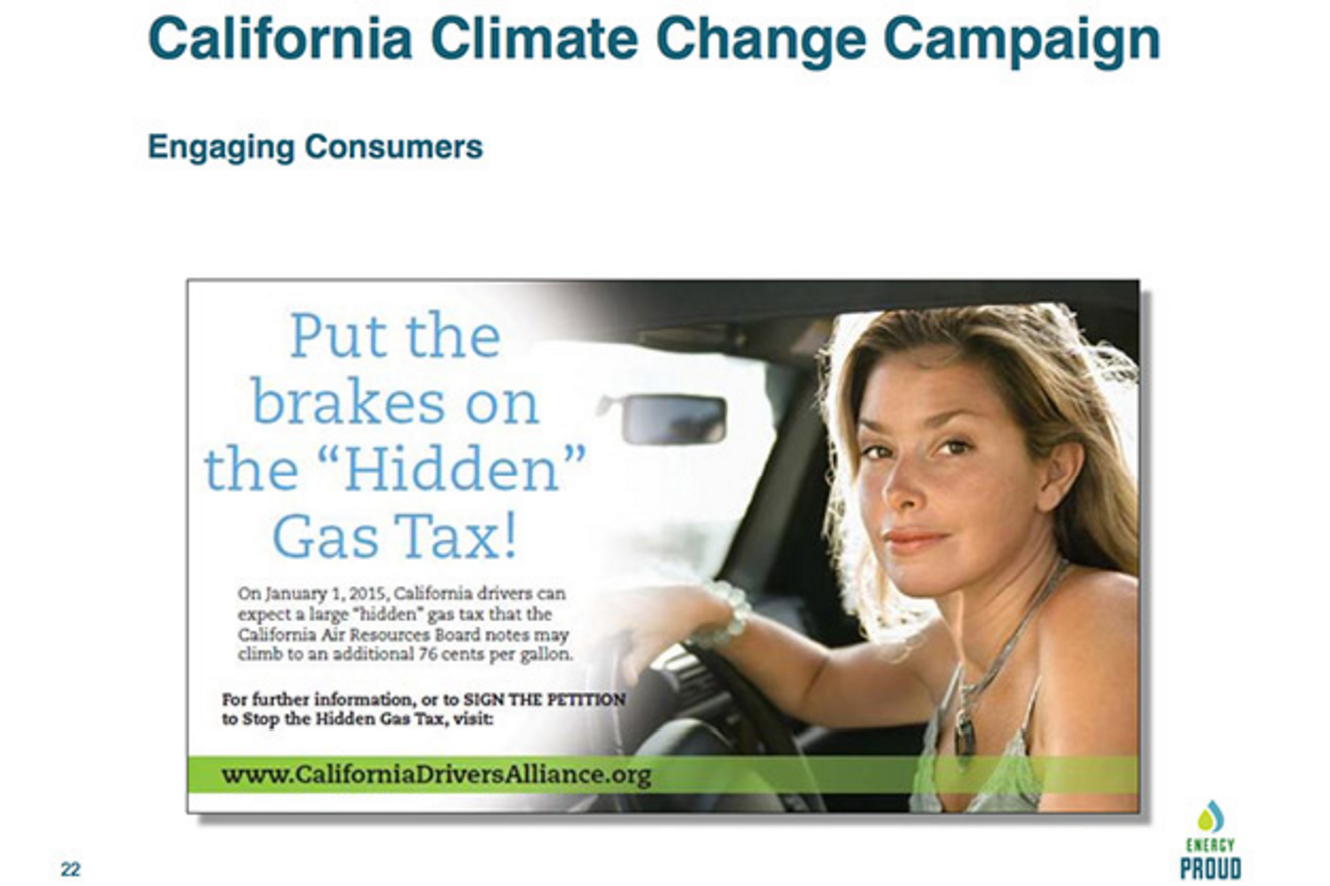 It didn’t work, and the law got passed in California. But one of the WSPA’s astroturfing groups, the California Drivers Alliance, continued the push against emissions regulation, this time against SB 350 in the summer of 2015. The alliance re-dubbed SB 350 “The California Gas Restriction Act of 2015” and waged an information battle with leaflets, a social media campaign, billboards and media ads. WSPA claimed that if laws to restrict emissions were enacted then drivers’ mileage would be restricted and the state would ration petrol. Newsflash: the state can’t legally do these things and SB 350 wouldn’t mean they could. Car industry not squeaky clean either In the 1990s the oil and car industries worked together to scupper the nascent EV industry in the US, according to the documentary “Who killed the electric car?” But now the car industry may be – finally – taking a lead in making EVs affordable and widespread. In the wake of the Dieselgate scandal, also late last year, VW is now in talks to set up a remediation fund to promote zero-emissions vehicles in California, as well as one US-wide fund. US authorities are also asking the firm to manufacture EVs in the US as a way of making up for the emissions test deception. VW and a host of other car companies – including Peugeot, Mercedes-Benz and Audi – have said that they are pushing EVs in response to the scandal. Economics Meanwhile, there could significantly more electric cars on the road by 2040 than previously projected, according to Bloomberg New Energy Finance – simply because they are becoming cheaper as battery prices plummet.

So despite oil and car industry hindrances to electrification, it could still happen because of… economics.