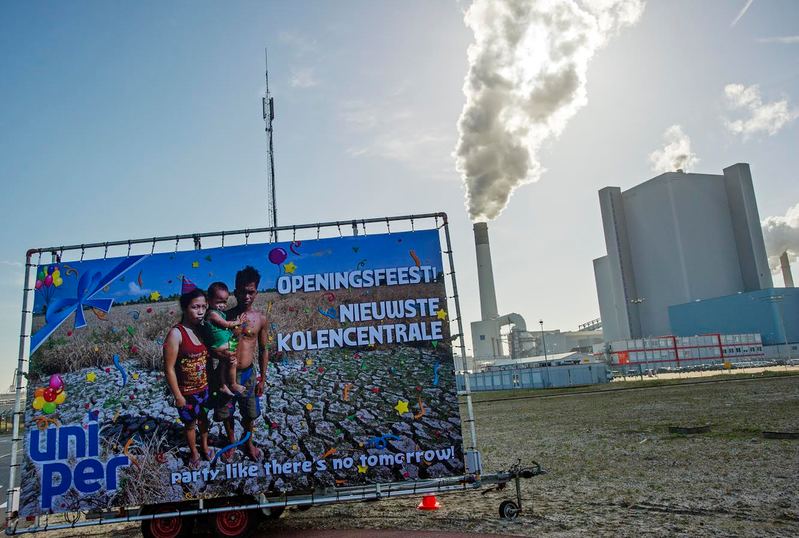 The rise of renewable energy has driven fossil fuel overcapacity and low power prices across the continent, and several countries – including the UK – have even announced plans to phase out coal in the coming years.

Energy giant E.ON – for one – is already making a move to stay above water, taking a 24 billion euro hit so it could dump its coal and gas assets into a bad bank called Uniper.

But that is miniscule compared to the cost of closing new coal plants decades ahead-of-schedule.

There’s simply no way these coal plants can stay up and running until 2055 if we’re going to keep global temperature rise ‘well below 2 degrees,’ as was agreed by world leaders in Paris.

The battle between new coal projects and new climate targets is now unfolding right now in the Netherlands, the only country in the world that managed to renew its entire coal fleet in last few years.

To give an overview, five old coal power plants in the Netherlands have recently shut down, but three large new ones were recently opened — owned by RWE, Uniper and Engie.

As a result, installed coal capacity has actually increased, driving up CO2 emissions.

Not only that, but a new report from the Institute for Energy Economics and Financial Analysis (IEEFA) found that these three new coal projects are already losing billions of euros.

But last year, in the run-up to the Paris climate conference, the Dutch parliament accepted a resolution calling for a coal phaseout and urging the government to come up with a plan make that happen.

Recently another resolution was accepted asking to bring the trajectory for phasing-out coal in line with the Paris Agreement and with a goal of 55% CO2 reduction by 2030.

Meanwhile, a report by the New Climate Institute concluded that in order to be in line with the Paris Agreement, the Netherlands needs to reduce CO2 emissions by 40% by 2020 — closing all coal power plants by the end of the decade.

At the moment, there is a parliamentary majority in favour of a phase-out by 2025. The social democrat PvdA faction, together with the liberal VVD faction in the coalition, wants to close the country’s last coal power plant by the middle of next decade. However the liberals, including VVD-Minister of economic affairs Kamp, oppose the proposed phaseout.

Meanwhile the energy companies are divided, with Uniper and RWE mounting a full-throated defence of  their coal plants, as Nuon – owned by Vattenfall – and Engie openly state they are willing to close their coal plants and invite the government to make a deal.

This is not surprising, as these utilities have a lot of gas capacity that is presently mothballed, while coal-dominated RWE and Uniper would be the big losers of a coal phaseout.

The Dutch government will unveil its coal phase-out plan before Christmas, following a series of delays.

With the world is watching, what will it do?

Williem Wiskerke is a climate campaigner with Greenpeace Netherlands