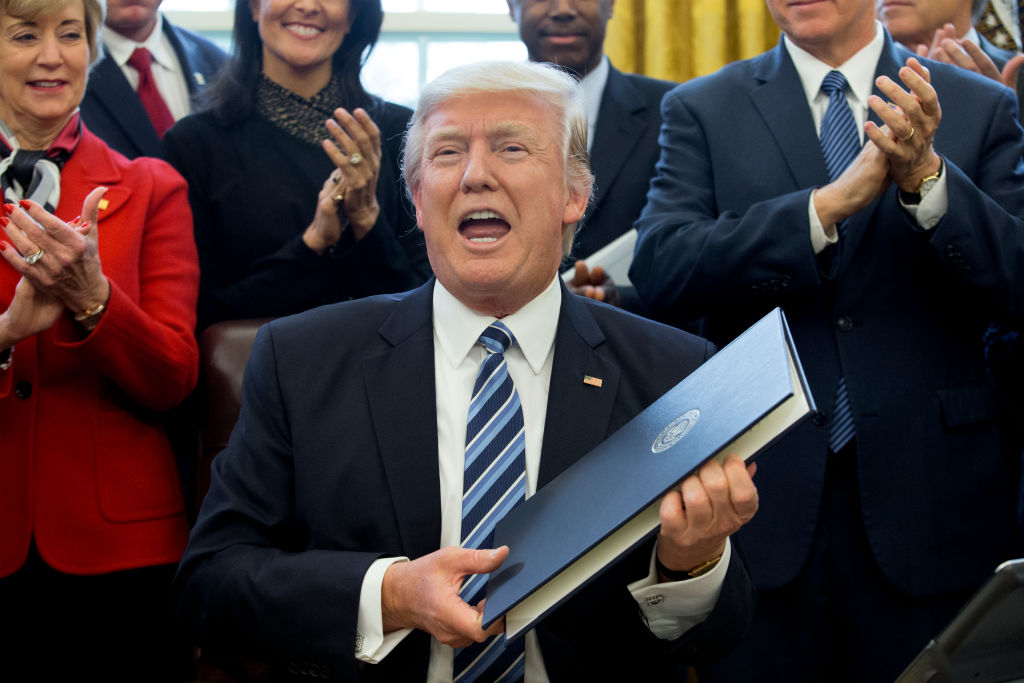 This comes as the German manufacturer is embroiled in a series of legal disputes over attempts to cheat emissions tests.

In a visit to Detroit, the heart of the American auto industry, the President reopened a review on fuel standards due to come into force in 2022.

The move will effectively either weaken or delay the implementation of the new standards.

It follows months of lobbying from the Auto Alliance trade group, which has been writing to President Trump since his victory in last year’s election, asking him to do just this.

Volkswagen is a member of the trade group, along with BMW, Toyota and 15 other major carmakers.

The standards backed by Obama would have underpinned the move towards low-carbon cars such as EVs, and helped reduce greenhouse gas emissions that cause climate change.

In a statement to Unearthed, VW said it is “not recommending a rollback of greenhouse gas emissions standards” but does support the lobby group’s call for a fresh review on which the auto industry would consult. 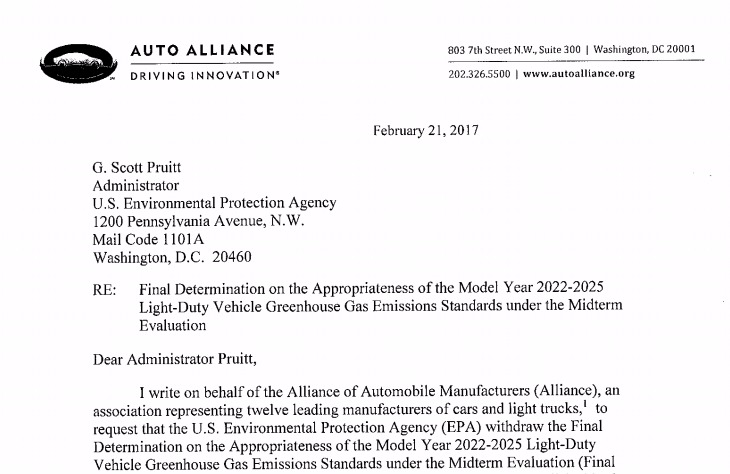 “For the auto industry, the Final Determination may be the single most important decision that the EPA has made in recent history,” Mitch Bainwol, CEO of the Auto Alliance, wrote to agency chief Scott Pruitt late last month.

Bainwol, speaking on behalf of the largest car companies in the world, urged the Trump administration to reverse the decision to maintain ambitious fuel efficiency targets for the middle of next decade.

“All we are asking is that EPA withdraw the Final Determination and resume the Midterm Evaluation,” he concludes.

What are the CAFE standards?

The Corporate Average Fuel Economy rules are there to ensure cars make the most of the gas they consume, travelling a certain number of miles per gallon of petrol.

These standards didn’t change much in previous decades, but the Obama administration called for improved greenhouse gas emissions standards — ramping up to 54 mile per gallon by 2025.

There was a ‘midterm review’ due to be held by 2017, but the EPA – backed by a report from the National Research Council – made a late decision to cement the target.

Despite meeting all previous standards in the initiative, and enjoying an economic resurgence in recent years, the major car manufacturers claim the 2022-2025 target is a bridge too far, and would cost the industry $200 billion.

Leading Democratic Senators have also written to Pruitt, asking that he hold in place the Final Determination and calling the 2022-2025 emissions targets “economically feasible and technologically achievable for the auto industry.”

VW appears to have tied itself in knots over its position on the vehicle emissions rules.

In a statement to Unearthed, it said it did not want greenhouse gas emission standards to be weakened — but lifting the Obama administration’s Final Determination would likely lead to just that.

The other members of the Auto Alliance are forthright in their belief that the 2022-2025 standards are too stringent and overly expensive.

VW’s carefully-worded statement echoes a letter sent to Greenpeace earlier this year from its UK managing director Paul Willis, in which he failed to distance the firm from the lobby group or Trump’s policy.

He said the car company “is not recommending any changes to the Greenhouse Gas standards under review in the Midterm Evaluation,” despite the clear intentions of the letter’s other signatories.

VW, which was displeased with the initiative back in 2011, even after it was rubber-stamped by other industry players, is facing a myriad of lawsuits from around the world for deceiving vehicle emissions tests.

“Volkswagen supports the goals of EPA’s “One National Program” for the regulation of greenhouse gas emissions and is not recommending a rollback of the greenhouse gas emissions standards. Volkswagen believes that the MTE process provides an important opportunity for EPA to make certain that the regulations take into account current data, and balance the vital need for CO2 reduction, the preservation of jobs, and consumer acceptance.

“Volkswagen believes strongly that the direction of the greenhouse gas emissions standards is critical to achieving emissions reduction goals that will help to address climate change. Our company is committed to environmental protection and is investing heavily in existing and new technologies that will help to protect the environment and deliver sustainable mobility, today and in the future.”