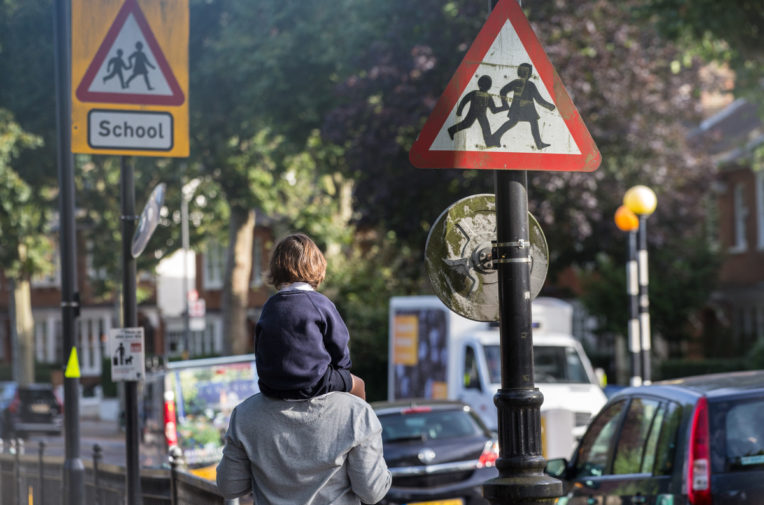 At least 2,092 education or childcare providers across England and Wales are within 150m of a road breaching the legal limit for NO2 pollution

At least 2,092 education or childcare providers across England and Wales are within 150m of a road breaching the legal limit for NO2 pollution

More than 1,000 nurseries across England are within 150m of a road breaching legal air pollution limits, a major investigation by Unearthed has revealed.

The news comes just weeks before the government’s legally mandated deadline to produce new plans for tackling the UK’s dangerously poor air quality, after its existing strategy was found by the High Court to be inadequate and overly optimistic.

Reports out today suggest ministers are looking to limit the impact of new air pollution zones on drivers in most cities.

The investigation found at least 2,092 education or childcare providers across England and Wales within 150m of a road breaching the legal limit for NO2 pollution. Of those, 1,013 were nurseries – many in towns and cities outside London.

The findings, described as “shocking” by Green Party leader Caroline Lucas, mark the first time the problem of illegal NO2 levels close to schools and nurseries has been investigated nationally, or in this depth.

The map below shows government data on pollution levels on the UK’s major roads network, and all nurseries and schools within 150m of a road with a recorded NO2 level over 40 – the legal upper limit.

Click on a school or road to see the NO2 reading.

A recent probe for the London Mayor’s office found more than 800 schools, colleges and nurseries in the capital within 150m of illegal NO2 levels. But even this understated the likely exposure of very young children to toxic roads, because it did not include the thousands of privately-run nurseries that make up the bulk of provision for under-fives.

By mapping these private businesses alongside those run by local authorities, Unearthed found that in the capital alone there were more than 1,500 education or childcare providers near an illegally polluted road – more than 750 were nurseries.

While the issue was most acute in London, the investigation found that exposure of young children to air pollution is truly a national problem.

Unearthed found nurseries sited close to illegally polluted roads in towns and cities ranging from Plymouth in the South West, to Newcastle in the North East. In major conurbations like Birmingham and Greater Manchester dozens of nurseries are sited in affected areas.

Experts in air pollution and children’s health described the findings as concerning, and called for urgent action from the government and councils.

Chris Griffiths, professor of primary care at Barts and the London School of Medicine and Dentistry, told Unearthed: “This is important, because air pollution is affecting lung development of children in nurseries in cities and towns across England. It’s a national problem.

“Although [this investigation] relates to the EU annual legal limit for NO2 pollution, there isn’t an accepted safe level. So even toddlers in nurseries where the exposure levels are lower will also be at risk of damage to lung growth.”

Professor Griffiths, who is also co-director of the Asthma UK Centre for Applied Research, said studies in the US, Europe and London, were “largely consistent” in finding that traffic fume exposure was associated with stunted lung development in children. Research that linked this exposure to “adverse health effects” typically showed “that these effects are seen in people living within 100m – 150m of major roads”.

He added: “We need to improve air quality in towns and cities nationally. That would be achievable by diesel scrappage, by promoting electric vehicles and hybrids.

“It’s the responsibility of government and vehicle manufacturers to promote that change.”

She told Unearthed: “These shocking figures show just how many children are at risk of exposure to toxic pollutants in the air. We are truly facing a public health emergency when it comes to air pollution – and it’s clear that urgent nationwide action by the government is needed. Children’s health is being put at risk by consistent failure from the government to take this issue seriously.

“Not only do we need clean air zones in our cities, but ministers must also reverse their wrongheaded decision to suspend the fuel duty escalator and use the money raised to invest in affordable public transport as well as walking and cycling provision. “

The government’s national modelling only gives figures for air pollution levels on A roads and motorways in urban areas, meaning thousands of stretches of road are not covered. And while Unearthed was able to map schools, colleges and local authority nurseries across England and Wales, we were only able to map private nurseries on the English side of the border.

More broadly, the government has faced criticism that the modelling of roadside NO2 levels in its plan is understated.

Last November’s High Court judgement against the government – following a legal challenge of its air quality plans by environmental lawyers Client Earth – found that modelling in the current plan relied on overly optimistic assumptions about emissions of nitrogen oxides (NOx) from diesel cars.

As a result, the government will have to produce new modelling to support its new plan. It is expected this will require significantly more ambitious plans to bring NO2 levels across the UK down to the legal limit as soon as possible.

“We are firmly committed to improving the UK’s air quality and cutting harmful emissions.

“That’s why we have committed more than £2billion since 2011 to increase the uptake of ultra-low emissions vehicles, support greener transport schemes and set out how we will improve air quality through a new programme of Clean Air Zones. In addition, in the Autumn Statement, we announced a further £290m to support electric vehicles, low emission buses and taxis, and alternative fuels.

“We will update our air quality plans shortly to further improve the nation’s air quality.”

The government’s 2015 plan mandated just five “clean air zones” – areas that impose charges on certain kinds of high-emission vehicles – outside of London. These were in Leeds, Derby, Southampton, Birmingham and Nottingham. London Mayor Sadiq Khan is already pushing forward with plans for an “ultra-low emission zone”.

But there are many communities outside these areas currently affected by polluted roads.

Unearthed found nine local authority areas outside of the current CAZ plans with ten or more education or childcare providers sited close to an illegally polluted road, including Sheffield, Doncaster, Hampshire, Leicester, and Stoke-on-Trent, among others.

It is not possible to determine from the government’s roadside pollution modelling what the air quality will be within the grounds of nearby schools and nurseries – the distance road pollution travels and how quickly it dissipates will vary according to many factors, ranging from weather, to the height of nearby buildings or trees.

Many nurseries contacted by Unearthed were unaware of air pollution issues in their area. But some called for concerted action from government and councils.

Busy Bees Childcare is one of several large nursery chains that has more than one site close to a breaching road. Managing director Marg Randles said: “Undoubtedly the levels of pollution across many parts of the country have reached unacceptable levels and we understand that everyone is affected by high levels of nitrogen dioxide.

“Reducing the levels of pollution especially around homes, schools, hospitals and nurseries where levels are high is hugely important and the government has been very clear that it is firmly committed to improving the UK’s air quality and cutting harmful emissions and we support that commitment.”

Get weekly news on air pollution and the environment

How we did it

This investigation is based on DEFRA’s modelled data for annual average “roadside” NO2 levels for 2015 – the latest year for which data is available. This data models pollution to within four metres of the roadside, and is produced to help assess the UK’s compliance with European Union legal limits for NO2 pollution. It does not model air quality on every road in the country – only A Roads and motorways in “urban” areas.

Unearthed mapped this pollution data against geocoded addresses for education and childcare providers drawn from two databases. The first is the Department for Education’s Edubase database of educational establishments (private and state-funded), which ranges from local authority nursery schools up to higher education establishments. The second is Ofsted’s Early Years Dataset, which includes all registered providers of childcare – from this dataset Unearthed only mapped the providers of childcare on “non-domestic” premises. Where the same provider appeared in both datasets, we removed one of the entries to prevent double counting. However, where two or more providers are offering education or childcare from a single site, both are included in the analysis.

We then manually checked the geocoded coordinates of every nursery, school, education or childcare provider in the data that was found to be within 150m of a breaching road.

Our definition of “nurseries” in this analysis includes all Local Authority Nursery Schools from the Edubase database, and all providers from the Early Years Dataset that are operating from non-domestic premises and are on the Early Years Register – this register is compulsory for most organisations providing childcare for children aged 0-5 for more than two hours a day.

Because the Early Years Dataset only covers England, we have no data about the location of privately run nurseries in Wales.

Although Unearthed has intensively checked every aspect of this analysis, no dataset is perfect and it is always possible there is something we have missed. That’s why we’re keeping our map and dataset live and public.

Please contact us with any comments or suggested changes.