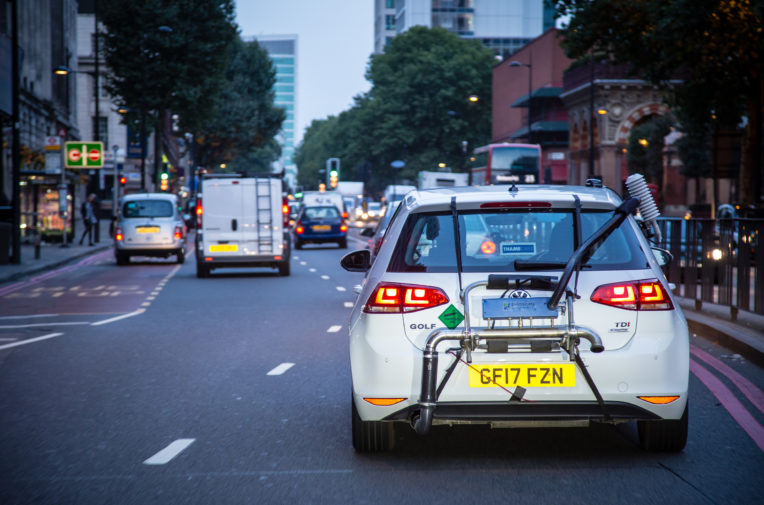 New tests designed to force firms to reveal how much pollution their cars cause in the real world are recording significantly lower levels of pollutants than independent tests on London’s illegally polluted roads.

The investigation compared the results of the tests to previously unreleased data obtained by Unearthed for the first real world tests conducted by car companies. The comparison revealed that cars may be able to pass the tests whilst still putting out far more than the legal limit when in congested rush hour traffic.

“Real world” tests came into force in September, meaning that all new cars now have to be tested on the road instead of in the lab. Existing models will also have to comply within two years.

The pace of change, or lack of, continues to threaten the future of diesel

The results mean that the new rules may fail to clean up the air around highly congested urban streets. Instead, even new diesel cars may continue emit far more than the rules suggest in some of London’s most polluted areas.

They come after an investigation into nurseries found that more than 1,000 nurseries are within 150m of an illegally polluted road, including 761 in London.

Experts who carried out the tests said they suggest that “the pace of change, or lack of, continues to threaten the future of diesel”.

INTERACTIVE MAP: Nurseries and schools within 150m of roads with illegally high levels of NO2 pollution, of which diesel cars are a major source. Enter your postcode in our interactive map to find the affected places in your area.

Greenpeace commissioned consultancy Emissions Analytics to carry out tests on three cars: a Volkswagen golf, a Vauxhall Insignia and a BMW mini. The golf and the insignia have already been through real world tests, while the mini will be required to before 2019 – all the firms may choose to make changes to their cars before the deadline.

A Vauxhall Insignia recorded levels 34% below the legal limit, but when tested over a 3 mile illegally polluted stretch in central London in morning rush hour came in at 18% over the EU limit – and 42% over Vauxhall’s own tests.

The results do not show that the manufacturers have broken the law, as it only applies to new models from September 1. In the full test, vehicles must be tested in urban, motorway and rural settings so the results only show cars exceed the limits in congested urban areas.

The results suggest that emissions vary greatly based on traffic levels. But they also vary based on variables including temperature, emissions reduction technology and the area in which they are tested.

Accordingly, there were variations between the tests, with each vehicle tested twice on two different routes, one at morning rush hour and one in the evening. The Vauxhall insignia came well below both the morning and evening tests, despite breaching the limit in the congested section. And while the mini recorded higher results in the evening, it came well within the limit in the morning.

An industry expert pointed to the use of more effective emissions technology as one reason for the Insignia’s lower emissions.

Charles Tumelaire, who previously worked as a diesel engineer for Ford said: “The emissions technology used by Vauxhall seems less sensitive to the road and traffic conditions, even in congested traffic. But for the VW and the Mini, the NOx emissions keep increasing through the test – probably because the NOx technology they use becomes saturated.”

The results come two years on from dieselgate, when VW was exposed in the US using defeat devices so that cars emitted far less in the lab than on the road. The scandal spread to Europe where several manufacturers are now facing legal action.

Since then, governments and corporations have come under escalating pressure to tackle an air quality crisis that is held responsible for the exacerbation of serious respiratory and heart conditions. The UK has been in breach of EU NOx limits for years.

Manufacturers have responded to the crisis by supporting the introduction of “real world” testing across the EU, despite successfully lobbying to weaken the legislation.

The new tests mark a sea change in emissions testing; for the first time ever manufacturers have to prove their emissions on the road and cannot rely on laboratory tests that grossly underestimate real emissions.

The industry is relying on the new testing regime to “provide consumers with the reassurance that manufacturers are delivering on air quality”.

But the legislation permits manufacturers to choose the time of day and year that the vehicles are tested and gives flexibility on the route. This flexibility could have a significant impact on the emissions recorded in the test.

The tests were also conducted in late summer, when emissions technology is more effective and with hot engine starts. In comparison the manufacturers used cold starts. These factors are likely to mean the results are optimistic, experts confirmed.

Emissions Analytics, the consultancy who conducted the tests, said that while diesel vehicles are becoming less polluting, the results show that in congested areas, progress has been too slow:

CEO Nick Molden said: “The results of the test demonstrate what we expected to be the case based upon our wider testing program. Our testing showed that whilst improvements are present under some conditions, the results also show that further improvements may be required for both the testing regime and diesels to manage challenges like London’s rush hour.

“Other Emissions Analytics testing shows diesels can be cleaner in normal urban and motorway driving. However, the pace of change, or lack of, continues to threaten the future of diesel.”

On average, the three vehicles recorded NOx emissions of 178 mg/km, slightly higher than the legal limit of 168mg/km.

And over an illegally polluted stretch of road, average emissions for the cars came in at 253 mg/km, 50% above the limit.

The Society of Motor Manufacturers and Traders said in a statement:

“[Real world tests] will provide consumers with the reassurance that manufacturers are delivering on air quality. We can’t comment on results from non-official tests where the methodology is unclear. Criticising this new, highly complex and robust test based on the results of a couple of vehicles, which meet the required legal standard but were produced before the introduction of RDE, indicates a failure to understand the timeline and legal and testing process.”

In a statement to Unearthed, Volkswagen said:

“Volkswagen Group embraces the forthcoming RDE and WLTP standards and all its products will be fully compliant.

In the RDE test, the exhaust gas components NOx (nitrogen oxide) and particles (fine dust) are measured during an actual drive on the road using a Portable Emissions Measurement System (PEMS). However, consumption and CO2 emissions are not measured. Because road measurements involve a wide scatter, this type of value would not be at all suitable for customer information and vehicles would not be comparable.

Without access to details of the conditions under which this particular test was conducted it is not possible for us to comment on the results obtained.”

Unearthed shared the data from the test with Volkswagen.