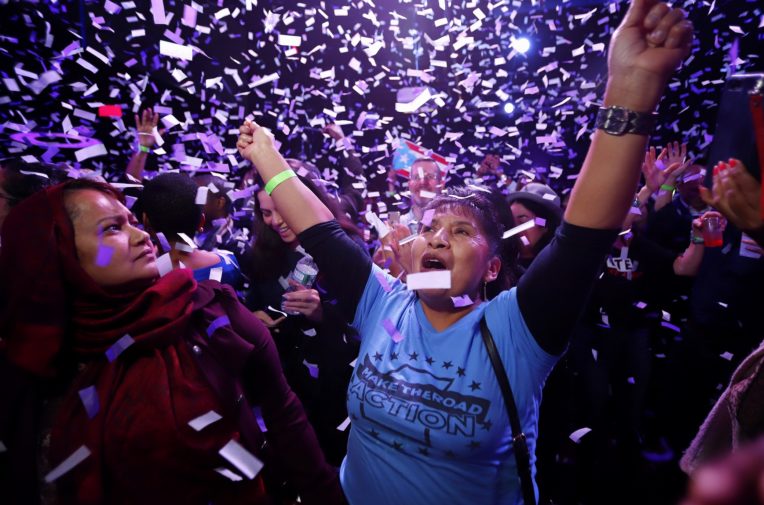 The best environmental journalism of 2018

From frontline reporting on the Brazilian election to brilliant explainers on our changing climate, here are the stories we wish we had written this year

The best environmental journalism of 2018

From frontline reporting on the Brazilian election to brilliant explainers on our changing climate, here are the stories we wish we had written this year

The Paris Accord promised a climate solution. Here’s where we are now – New York Times, Somini Sangupta

Expectations were low heading into COP24, and the agreement reached at the end of the talks exceeded them. Just. Faced with the challenges of populism and renewed climate denialism, the Paris agreement survived discussions in Katowice, Poland, even if some think the deal reached by delegates falls far short of what we need to do to keep global temperature increases within 1.5 degrees. It’s all rather depressing, given the optimism that greeted the signing of the Paris agreement in 2015, as Somini Sangupta writes.

It’s been a bad year for palm oil. From a glut of stories about environmental destruction in western media, to an ugly policy fight in the EU, to slumping petroleum prices: traders will be glad to see the back of 2018. This piece from ProPublica tells the story of the commodity in a new way, going back to 2007 and a little discussed Bush administration policy, to give new insight into how palm oil got into everything.

For this podcast series, Kelly McEvers and her team visited the heart of the ailing US coal industry to see whether President Trump’s campaign promises to revive coal mining were bearing fruit.

What’s driving Mohammed Bin Salman? Is the Saudi Crown Prince really weaning his country off oil and driving out extremism? Or is he just taking more power for himself? Before the news of Jamal Khashoggi’s murder focused media attention on Saudi Arabia, this piece gave much needed insight into the policies of MBS.

This piece had its detractors, Robinson Meyer in the Atlantic chief among them, but as a piece of historical writing and a sign of a new urgency in American reporting on climate change, it’s worth reading.

Why the Dutch are ditching gas extraction – Channel 4 News

Long before mini-quakes forced fracking in Lancashire to pause, the Dutch decided to abandon fracking altogether after tremors blighted communities in northern Holland. This Channel 4 News package did a great job of exploring fracking in an original way.

The US midterm elections this year could be a big deal for the environment. Days after the results were announced, left-wing Democrats were pushing the party to push for a Green New Deal. Now, the party has moved to make tackling climate change a key part of its 2020 agenda. But what would a Green New Deal look like? Thankfully, Carbon Brief has an answer to that.

A network of companies in London are looking to get into politically dangerous regions of Africa to search for oil deposits that climate scientists warn must stay in the ground if we are to avoid devastating global warming. That’s the first part of DeSmog UK’s ‘Empire Oil’ investigation.

What we loved last year

California knew the Carr Wildfire could happen. It failed to prevent it – ProPublica, Keith Schneider

The California wildfires this year were arguably the most visceral example of our changing climate. But as well as being a consequence of climate change, this investigation found the fires were also a result of years of systemic failure by every level of government.

After Hurricane Maria ravaged Puerto Rico, Naomi Klein reported for the Intercept on how disaster capitalism was reshaping the island’s economy.

Our climate is changing and its shaping politics and society across the world. Back in October, when the climate caravan was dominating the news in the US, the Guardian was able to take the longview on the issue, explaining global warming is forcing farmers off their land in Central America, leading to mass migration.

Climate change is reshaping politics across the world. That’s especially true in India, where incidents of extreme heat and drought have increased in recent years. This piece, published this summer, explores how climate-related disasters affect women in India’s villages.

Flood thy neighbor: Who stays dry and who decides? – ProPublica and Reveal

While the California fires and Kanye West private fire service gave us an idea about what extreme inequality looks like in a changed climate, this joint investigation by ProPublica and Reveal looked at what drives decisions on town planning that decide who survives when disaster strikes.

The rise of China

It’s more than just those giant, solar panel pandas, China is beginning to lead the world on renewable energy and today has “more solar energy capacity than any other country in the world”.

Even as China leads the world on renewable energy, this piece sets out “Beijing continues to export polluting technologies like coal-fired power plants” to the developing world. The use of satellite images in this article really brings home the scale of China’s ambition.

China’s decision to keep exporting fossil fuels could affect us all. In fact, it could “imperil” the Paris agreement, AFP reports.

‘The dirt poor will eat the filthy rich’: How a Democrat can win in Trumpland – The Guardian

Could a Navy veteran and former Trump voter win for the Democrats in coal country? Spoiler alert: no. But Richard Ojeda came closer than most, and this film helped explain the motivations of voters in West Virginia in the Midterms in a thoughtful and engaging way.

Bolsonaro has made grim threats to the Amazon and its people – Climate Home, Fabiano Maisonnave

Reporting for Climate Home, Fabiano Maisonnave has done some great work highlighting the impacts of president-elect Bolsonaro’s rhetoric on the people who call the Amazon rainforest home.

Even as climate change impacts the state of Rondonia, the majority of its residents backed a candidate who backed quitting the Paris agreement and scaling up deforestation. Dom Philips had this impressive story in the lead up to the Brazilian election.

The revolutionary trade union movement Solidarity used the UN climate talks in Poland to sign a statement questioning the science on climate change. Being in Katowice, surrounded by coal pollution and coal-based goods, certainly was a strange experience, as this article artfully explains.

Not everyone agrees with Arron Banks about the value of his diamond mines – Open Democracy, Leigh Baldwin, Marcus Leroux, Peter Geoghegan and Billy Ntaote

Open Democracy have published some terrific investigations this year, and this piece on Arron Banks, one of the architects of Brexit, produced in collaboration with Source Material, is one of their best.

With all the talk of the rising right-wing nationalism across the world, it was easy to miss the fact that in Germany, the Green Party surged into second place in national opinion polls. We thought this piece in Politico did the best job of explaining the phenomenon.

A fascinating deep-dive into the long-term impacts of China’s December 2017 decision to close its doors to “foreign garbage”. Almost overnight, the world’s recycling industry was plunged into chaos, and this long read traces the ripples across the world and back to the west. We quite liked its shout-out to our own investigation into British waste being dumped in Malaysia, too.

Hope you’re not eating. The phrase “diseased fish” is enough to turn your stomach and the pictures in this story are something else. But this is a great piece of environmental journalism, imaginatively told by the Ferret.

Remember Scott Pruitt? You know, the guy from the Ritz-Carlton moisturizing lotion scandal, the used Trump hotel mattress scandal, the Chick-fil-a scandal, and the weird White House lunch scandal? Pruitt’s political career ultimately couldn’t withstand this tidal wave of corruption, but his legacy could impact us all. As Rebecca Leber sets out, Trump’s former head of the Environment Protection Agency did his best to undo Obama-era rules protecting the environment and public health, before he had to resign.

The Trump’s administration’s decision to weaken car emissions rules caused automakers to baulk. It was too much, too soon and would create a regulatory headache for the industry as the nation’s wealthiest state pledged to resist the move. So who benefited from Trump’s move? Hiroko Tabuchi found out.

With the Brexit debate filled with stories about the fear British food standards could fall after we leave the EU, the Bureau of Investigative Journalism revealed that the UK is already home to a number of large-scale farms where cattle are crammed together, with no access to pasture.

This explosive investigation by Reuters caused Johnson & Johnson’s share price to plunge and is a real feat of good old-fashioned news reporting.