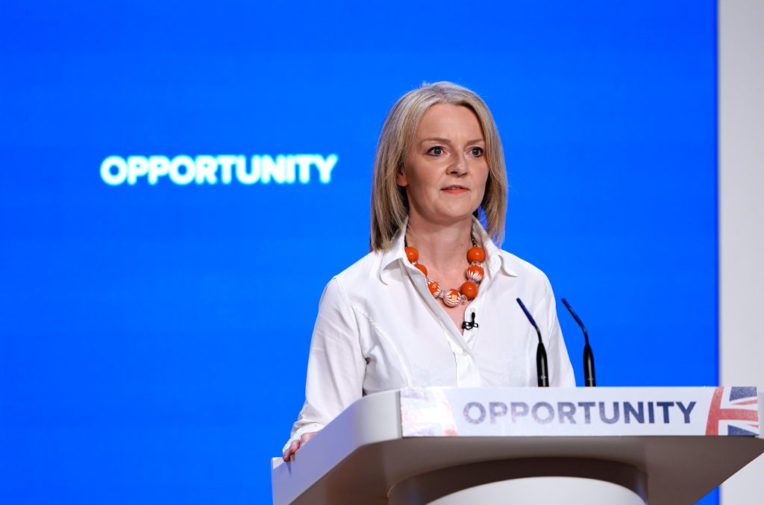 In “off the record” meetings with climate sceptic think tanks that have driven Trump’s radical program of deregulation and tax cuts, Truss sought to learn whether such policies could benefit the UK.

In one meeting the then chief secretary to the Treasury discussed the success of Trump’s efforts to slash regulations with the chief economist of a controversial lobby group funded by the Koch brothers.

In another, Truss planned to ask what lessons she could learn from Reaganomics “on things like regulation and red tape.”

Truss is now responsible for negotiating a trade deal with the United States and will visit Washington DC later this month to recommence talks.

The UK government has previously ruled out weakening standards as part of a US-UK deal but Boris Johnson has appointed a number of pro-deregulation Conservative MPs to senior cabinet positions.

Truss recently argued that the UK could learn from Trump’s approach to regulation and has recruited special advisers from libertarian think tanks that support a deregulatory trade deal with the US.

Sophie Jarvis, recently of the Adam Smith Institute, will advise Truss on policy issues; while Nerissa Chesterfield, is moving from her role as head of communications at the Institute of Economic Affairs (IEA) and will advise on media.

Over the last two years, the IEA has run a concerted campaign for a hard Brexit that seeks to shift the UK away from the EU’s system of regulation and towards that of the US, which is widely considered to be less stringent.

“Truss has cosied up to organisations that want the UK to slash taxes and regulations… they are planning a UK-US deal that would destroy worker’s rights, our food standards and animal welfare regulations,” Gardiner said, “an agreement like that with the US would make it far harder to get a deal with the EU that protects jobs and our economy,” he continued.

More on US trade negotiations

During her three day visit to Washington DC in September 2018, Truss attended an “off the record” meeting with senior representatives of the Heritage Foundation and the Competitive Enterprise Institute (CEI) to discuss “regulatory reform,” according to documents obtained by Unearthed under freedom of information rules.

A briefing note preparing Truss for the meeting on September 19 reveals that she was to ask Heritage: “What can we learn from ‘Reaganomics’ on things like regulation and red tape.”

Imports into the UK will meet our stringent standards

Truss also planned to tell Heritage that she is “committed to” and “personally interested in… exploring supply side reforms” in the UK.

Examples of supply side reforms include making it easier for companies to fire employees and slashing environmental regulations to make businesses more profitable, both of which could fall within the scope of a US-UK trade deal.

Last year Unearthed revealed that the Heritage Foundation and CEI – together with the Cato Institute, which Truss also met with during her trip – were part of a transatlantic coalition of libertarian think tanks seeking to influence the contents of a US-UK trade deal. The IEA and the Adam Smith Institute were also part of the project.

Truss’ visit to the US directly coincided with the Washington DC launch of this coalition’s “ideal” free trade agreement, which sought to provide a “blueprint” for the US and UK government’s to follow.

A spokesperson for the department for international trade told Unearthed: “We are committed to negotiating an ambitious free trade agreement with the US that supports good quality jobs throughout the whole of the UK.”

“Without exception, imports into the UK will meet our stringent food safety and animal welfare standards. That’s not going to change,” he continued.

On September 18 Truss met with the American Legislative Exchange Council (ALEC), during which she discussed deregulation and Trump’s tax cuts with its chief economist, Jonathan Williams.

ALEC is a controversial coalition of corporate interests – including the Koch brothers – and state-level politicians, that meets regularly to draft business-friendly legislation that is then enacted by state governments across the US.

In recent years a number of blue chip companies, including Shell, BP and ExxonMobil have quit ALEC over its opposition to efforts to tackle climate change.

Notes from the meeting reveal that Truss discussed deregulation with Williams, who praised Trump’s “1 in 2 out” policy on regulations for being “gimmicky but effective.”

According to the documents: “ALEC said they thought the understated success of Trump has been this.”

A few months later, in January 2019, Truss wrote in The Telegraph that the UK could learn lessons from the Trump administration’s “about-turn in regulatory direction and the manufacturing revival.”

Another document reveals how an official from the Foreign Office wrote to a free market think tank called R Street on Truss’ behalf requesting a meeting to discuss “business deregulation”.

A version of this story also appeared in The Observer.