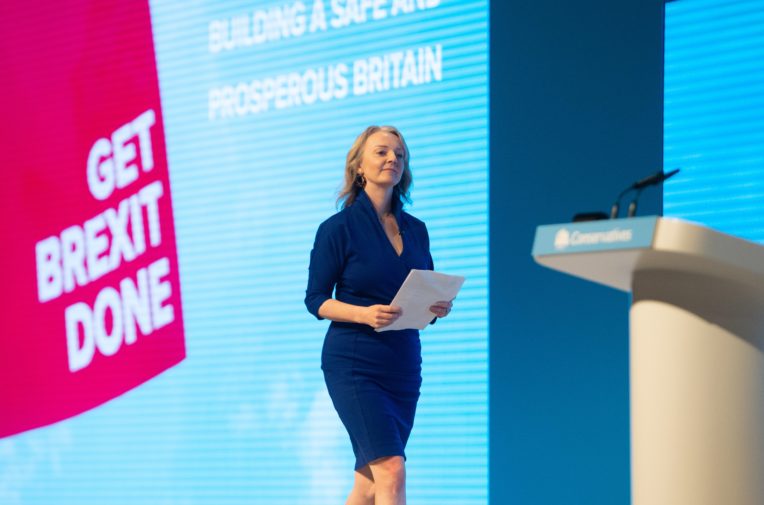 A leaked briefing prepared for Environment Secretary Theresa Villiers warns that her ministry will come under “significant pressure” from the Department for International Trade (DIT) to weaken the UK’s food and environmental standards to secure a trade deal with the United States.

The internal document states that DIT will push the Department for Environment, Food and Rural Affairs (Defra) to “accommodate” American requests to lower the UK’s sanitary and phytosanitary standards (SPS) post-Brexit.

“Weakening our SPS regime to accommodate one trade partner could irreparably damage our ability to maintain UK animal, plant and public health, and reduce trust in our exports,” it reads.

Prepared by Defra officials, the paper examines the impact of various post-Brexit scenarios on the UK’s food and environmental standards. It states that agreeing to US asks will severely limit Britain’s ability to negotiate an agreement with the EU and could lead to the EU imposing a hard border in Ireland to protect the single market.

Boris Johnson and Trade Secretary Liz Truss have both talked up the benefits of a trade deal with the US. In her speech to the Conservative Party conference she said: “The US, Australia, New Zealand, Japan, all of them are keen to get on with striking a new trade deal with us, which is going to mean new opportunities for British business.”

But the briefing points suggests tension between officials in government departments on the issue.

The authors urge Defra to “push back strongly” against DIT pressure “to secure our positions, particularly on dispute settlement, handling of custom terms and definitions, and around controversial issues (hormone beef, chlorine chicken)”.

Speaking at the conference earlier this week, however, Truss said she and her Defra colleague were united.

“The cabinet under Boris Johnson is a very cohesive team. There are many people around the table who championed free trade as part of the Vote Leave campaign. Theresa Villiers, for example, the Defra Secretary, is a strong free trade supporter,” she told an audience at a fringe event hosted by the Institute of Economic Affairs.

Labour’s shadow Trade Secretary Barry Gardiner told Unearthed: “That trade agreements with the USA and Australia risk opening the floodgates to food imports produced to much lower standards. Their rules specify ‘acceptable levels’ of maggots in orange juice, rat droppings in ginger and hormone levels in beef. The right level should be zero. Undercutting our farmers and food manufacturers like this would drive many of our producers out of business and put jobs at risk.”

A Defra spokesman said the department did not comment on leaked documents. “The UK is a world leader on animal welfare and environmental standards, and this will only continue to improve after we have left the EU,” he said.

The leak comes amid global tension over trade, food and environmental standards. The Austrian parliament recently blocked a trade deal between the EU and Brazil due to environmental concerns and the EU is in conflict with the US at the WTO over food and animal welfare issues.

US food and environmental standards are generally weaker than the EU’s. Brussels takes a precautionary attitude to environmental and food policy, while the US takes a risk-based approach. The debate over a post-Brexit trade deal with the US has been dominated by fears of hormone-fed beef and chlorine-washed chicken entering the UK.

During his time as Environment Secretary Michael Gove frequently called for environmental standards to be unchanged after Brexit. A document obtained by Unearthed sent by Defra officials to DIT addressing whether the UK would be forced to chlorinated chicken in a trade deal with the US, dated July 17, 2017, bluntly stated: “We have very high standards of food safety and these will not be watered down when we leave the EU.”

By contrast, when asked at the IEA event whether deals could lead to a race to the bottom on environmental standards, Truss said she wanted to take “a free-market approach”.

She said: “I’m very proud of the high environmental standards that we have in this country. But what we don’t want to do is end up on the route that the EU was on, of essentially saying that we are going to try and control everything that goes on in another sovereign nation, because that was the EU approach.

“So to me, of course one of the points is that we are working with countries with high standards, but it’s very dangerous and can lead to extra territoriality if you try and impose your regulatory system on another country. That’s not the approach I want to take. I want to take a much more free-market approach than that.”

Unearthed reported in August that Truss had travelled to Washington to meet with right-wing pressure groups and discuss the Trump administration regulatory economic policies.

The document prepared by Defra staff states that the US, Australia and New Zealand “are likely to pressure the UK to concede tighter definition of how SPS commodities are determined to be ‘safe’”.

The authors warn that pursuing trade deals with the US and the EU at the same time would be “challenging” and “create major issues with regards to traceability and enforcement.”

The document is also sceptical of a so-called “dual facing regime”, whereby the UK could accept “imports and use of products and techniques banned in the EU whilst maintaining access to the EU with minimal border friction”. It reads: “our own analysis shows that the operability costs (to government and business) are likely to be high. A dual facing regime arrangement  would only be cost effective if it were for a high-value, low volume product.”

In fact, the document notes, attempting to negotiate a trade deal with the US at the same time, or before the EU, could wind up sabotaging both deals. While the EU would be put off by the thought of the UK matching lower US standards, senior US political figures have said they will oppose any deal that jeopardises the Good Friday Agreement.

This story was also published in the Financial Times.