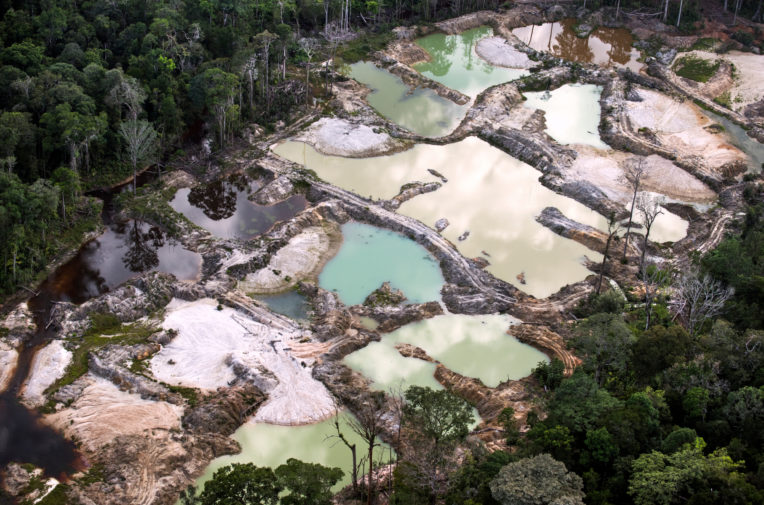 Across the Amazonian state of Pará, the epicentre of Brazil’s illegal gold mining industry,  restaurants and bars are shuttered to minimise the spread of coronavirus.

But in the state’s prime wildcat gold mining areas, close to Novo Progresso and Itaituba – known locally as Nugget Town – local police turn a blind eye to the state decree, and the miners’ haunts stay open.

Schools, churches and shopping centres are closed. But workshops that sell spare machinery parts and fix the excavators used in the state’s thriving gold mining industry are open.

The same can be seen in Rondônia, where stores selling and renting chainsaws and mining equipment in the towns of Ji Paraná, Ariquemes and Espigão do Oeste were open for business this week, while other non-essential shops were closed.

Amid a worldwide slowdown due to the coronavirus, gold miners from sites across five Amazonian states told Unearthed they had no plans to stop working during the pandemic, raising fears of increased deforestation and the potential spread of disease to vulnerable indigenous groups.

With the retreat of the inspection teams, we could see a quadrupling of deforestation in some areas

Meanwhile, sources within and close to Brazil’s environmental protection agencies, Ibama and ICMBio, said they would have little choice but to reduce their efforts to prevent illegal activities across the Amazon as older members of staff were taken off the roster and travel restrictions curbed operations.

The pandemic will further imperil the work carried out by Brazil’s environmental inspection agencies, following more than a year of what agency staff have described as a deliberate effort by the administration of President Jair Bolsonaro to undermine their work.

Indigenous representatives in Amazonian states told Unearthed they were terrified of the pandemic reaching their communities and of a surge in land-grabbing and violence by groups seeking to take advantage of weakened oversight of a region that is already notoriously difficult to police. Others reported that they had already noted an uptick in activity on their lands.

“Since the beginning of the year [logging] had started, but it was not yet so advanced. But now they are acting faster during quarantine,” Eric Karipuna, leader of the Karipuna people in Rondônia, told Unearthed.

Decio Horita Yokota, executive coordinator of the Indigenous Institute for Research and Education, said that the buoyant gold price and a looming economic crisis would only make things worse.

“This connection between mining and economic crises is historic. It is one of the few alternatives available, especially for those with little training,” said Yokota. “In this scenario, where gold is one of the few reserves of value that has risen, we can expect a monstrous wave [of miners].”

“Further more, we know that gold mining brings a whole cycle of social degradation with it, such as prostitution and drug trafficking,” Lepe added. “The potential for the spread of this virus through this channel is also great.”

It is not only an immunological susceptibility to new viruses that puts indigenous people at higher risk, said Antonio Oviedo, a researcher at NGO Instituto Socioambiental, although this is significant; in the past tribes have been all but wiped out by smallpox, malaria and measles brought by Westerners.

In Uru Eu Wau Wau if an indigenous person catches the coronavirus, the whole village will die

Social conditions and the frequent absence of proper health care also compound their vulnerability, he said, as does their frequent – and increasing – exposure to fires, often set by loggers and ranchers to clear forest. Fires in Brazil’s indigenous lands surged last year, more than doubling in the first nine months of the year, and outstripping the increase seen across the Brazilian Amazon as a whole.

“Many populations have a prevalence of anemia, malnutrition, even with children. The population has respiratory problems, especially in areas facing deforestation and burning,” Oviedo said.

Some indigenous groups have closed off their villages over fears of the spread of the virus, and called on the government for help expelling loggers and miners from their territories.

“We told the indigenous people not to receive anyone,” said Ivaneide Bandeira, who works with the Uru-Eu-Wau-Wau in Rondônia for local non-profit Kaninde and told Unearthed that there were currently loggers and grileiros on the tribe’s territory.

“The indigenous people go out hunting, they go out to walk, to do surveillance in the territory and, if they meet a person like that who is sick, it will be a tragedy. In Uru Eu Wau Wau if an indigenous person catches the coronavirus, the whole village will die.”

On Wednesday, the health ministry’s indigenous health service Sesai said that a 20-year-old woman from the Kokama tribe in Amazonas state was the first case of corona virus reported amongst Brazil’s indigenous people.

Since assuming the presidency in January 2019, Bolsonaro has spoken with open contempt of conservation efforts, and called for stripping the Amazon of its protections so it can be exploited by mining and agribusiness interests.

“We have a political trend, a context that the federal government and some of the state governments have been kind of incentivising people to do illegal activities like deforestation, because they have made informal promises that they would not be punished for this,” said Claudio Maretti, president of ICMbio from May 2015 until June 2016, and subsequently on the board of directors until January 2019.

“This message arrives in many places, places in deeper Brazil, as a given order,” said a senior source within Funai, the government’s indigenous affairs agency, who spoke on condition of anonymity.

The Funai official said that they had not yet been told how the pandemic would affect their fieldwork, but that they were already critically understaffed, with less than 50 percent of the servers they needed.

The director of Ibama Olivaldi Azevedo said earlier this week that a third of Ibama’s field operatives were close to 60 years old or had medical conditions that put them at greater risk for severe symptoms of the virus. Similarly, a senior ICMbio employee told Unearthed that flight restrictions were making it impossible to reach remote areas, or to move their teams around as usual. Instead they were forced to rely on skeleton local staff that are already in place.

“A much reduced number of agents will mean a reduction in the areas of deforestation that can be monitored,” they said. “Ibama is having the same problem.”