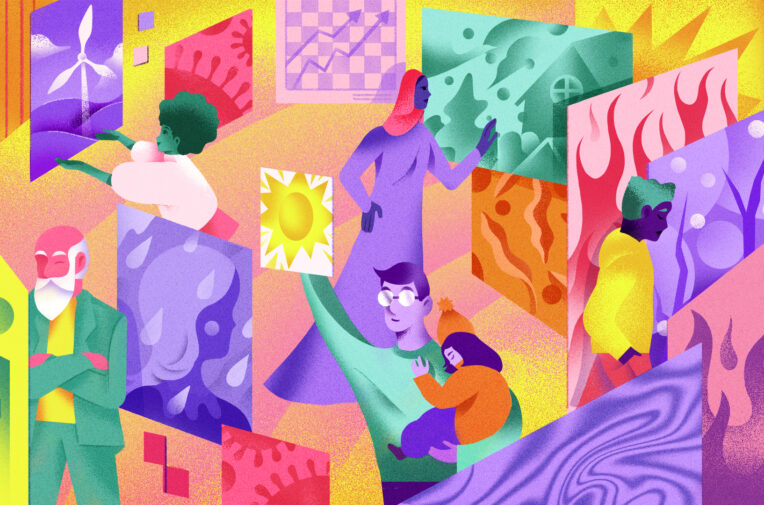 FutureProof: Investigating the futures we need to build

From HuffPost and Unearthed, FutureProof is a new series that explores how to build a more resilient world. Here's why we did it.

FutureProof: Investigating the futures we need to build

From HuffPost and Unearthed, FutureProof is a new series that explores how to build a more resilient world. Here's why we did it.

It seeks to improve the future, but it does so by exposing mistakes already made and wrongdoing already committed, relying on the assumption that the exposure will be a catalyst for something different to emerge. Rarely does it turn its focus forwards to what new problems may emerge, and what the solutions may be.

But with a crisis as overwhelming, complicated and urgent as climate change, maybe it’s not enough to only look backwards. We don’t have time to just wait and see what emerges.

The pandemic has given us a bitter taste of what it’s like to struggle through a disaster that exploits every weakness and widens every inequality in the systems that make up our world: food, housing, health, work. The climate crisis won’t be identical, but unless we start to do things differently, the same broken systems will fail us again and again.

So faced with the glaring unreadiness of our world to withstand a massive shock, we decided to investigate what a more resilient world could look like. We teamed up with HuffPost to create FutureProof, a series that sets out to find and examine solutions already in practice around the world. From urban planning in India to subsistence farming in Dominica, community energy in the US to a basic income trial in Kenya, the features in this series travel the globe to meet people and organisations working in new (and sometimes very old) ways to shore up the resilience of their communities in an increasingly volatile world.

Check out the series on HuffPost

It can be hard to talk about preparing for the climate crisis. It might feel like admitting defeat. The word ‘adaptation’ can conjure images of billionaires building bunkers to ride out the collapse of civilisation in comfort, or wealthy nations erecting expensive sea walls to buy themselves more time while poorer countries – that have contributed the least – are consumed by the tides.

But ignoring it is worse. Bringing carbon emissions down as fast as we can is critical, but for people all over the world, the crisis is already here – we need to work out how to reconfigure every part of our societies to keep us safe.

Preparing for the next crisis allows us to rework a world that wasn’t working anyway. The failures the pandemic highlighted aren’t new, and they don’t fall evenly. Placed closer to harm and deprived of the means to protect themselves or recover, the most marginalised consistently feel the sharp end of any crisis. Injustice and inequality recur throughout every feature in this series – from migrant workers in Covid-infested meat plants, to communities of colour in urban heat island hotspots, you can’t talk about resilience without looking at who is most vulnerable and why. As we learn from urban planners taking on extreme heat, solutions that take the most vulnerable as their starting point are the most effective at building wider resilience.

FutureProof takes us away from what we’re used to as investigative journalists. But in doing so, it gives us an opportunity to cover people not just as objects of government negligence, corporate wrongdoing, or climatic disaster – which is often the role they are forced to fill in our stories – but as agents with the capacity to fix, alter, protect, or resist.

Stories like these also counter the impression, often reinforced by the news, that we live in a world that is more brutal and doomed than it really is, which can give rise to a dangerous driver of climate inaction: hopelessness. Climate change is here, we were too late to stop it, there’s no point trying now – so the theory goes.

That theory is wrong. Between 1.5 and 4 degrees of warming lie countless human lives. The work of bending the path of our carbon emissions away from the worst case scenario is happening right now, and will continue for decades to come. So too is the work of preparing for the changes that have already begun, from heat-proofing cities to diversifying our food systems. There is still enormous potential to create the conditions for more people to survive and thrive.

Investigating the causes of the climate and environmental emergency we face is more crucial than ever, but no longer enough, if we do not also reveal the solutions that are being developed: the fixes, the alternatives, and the people behind them.

When it comes to preparing for a world of increasing, converging shocks, there are – obviously – no silver bullets. The changes needed to build our resilience are rarely simple (though sometimes, they are surprisingly so), and what works in one country, city or neighbourhood won’t necessarily work in another. But solutions are out there, and they are undoubtedly in the public interest. The object of covering them is not to create false hope. But by failing to cover them, we may be fuelling something worse: false hopelessness.

Heatwaves Are A Deadly Public Health Crisis. These Cities Have A Plan. – Rachel Ramirez

FutureProof is edited by Laura Paddison and Georgie Johnson, with additional editing by Amanda Schupak, Kyla Mandel, and Inori Roy.