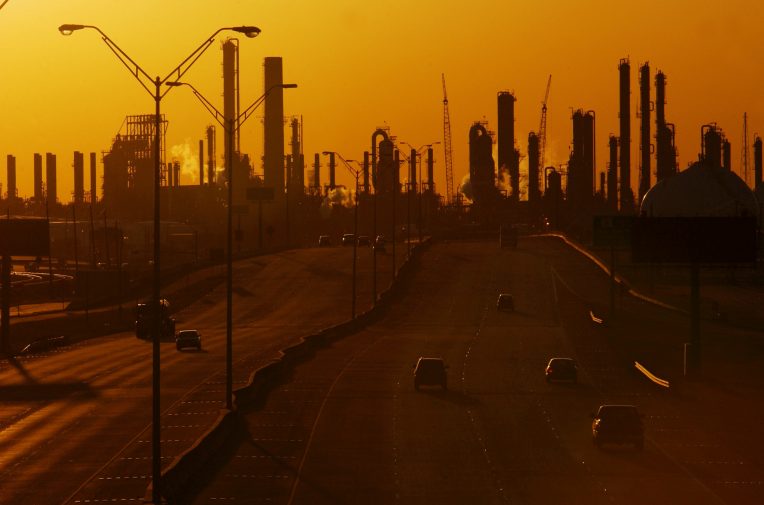 A group of America’s leading oil companies told a UK minister that the British government should champion natural gas as a “necessary compromise” in the effort to prevent climate breakdown, according to documents obtained by Unearthed.

Representatives of BP, Shell, Chevron, Exxon, and Equinor said they wanted the UK government’s help to position themselves as “a vital part of the solution” to climate change.

On a diplomatic mission to Houston, Texas, in February 2020, the then-trade minister Conor Burns met with the oil majors over dinner to discuss the UK’s leadership of the upcoming “COP26” UN climate summit.

Notes from the meal, obtained using freedom of information rules, show the companies said they “recognise the need to accelerate” the energy transition, discussing investments in renewables, storage capacity and carbon capture technology.

But they also pressed an argument they have made for many years: that the fossil fuel natural gas is and will be a ‘transition’ fuel.

“There needs to be greater recognition of the role of gas in transition,” the notes read, “it is cleaner than coal and fundamental to the Texas economy.”

“Moving the US and the developing world from coal to gas is a necessary compromise, while they make inroads in affordability of genuinely clean energy.”

The notes, which were drafted for Burns by a senior UK diplomat based in Houston, added: “These companies told you they want to work with the UK, including during our leadership of COP26.

“They need support from governments like ours so they can be seen as a vital part of the solution to future energy provision.

“They want transition without decimating our economies or stunting the growth of emerging economies. The public need to be given realistic expectations on the transition process; energy projects have long lead in times.”

The diplomat added: “It is too easy to demonise the industry, but this will not help resolve the problem; though all [the oil companies present at the dinner] admitted they had to be better at telling their story.”

The news comes after the International Energy Agency (IEA) announced that the exploitation and development of new oil and gas fields must stop this year if countries are to meet the widely-adopted target of net zero emissions by 2050.

Luke Murphy, from left-leaning UK think tank IPPR said: “Gas isn’t a ‘necessary compromise’ on the road to net zero, it’s a fossil fuel and another stepping-stone on the path to climate disaster.

“Internally, oil and gas companies will be fully aware their bid for gas to be adopted as a so-called ‘transition fuel’ flies in the face of established climate science, which they have known about for decades. This is climate delayism.”

Green Party MP Caroline Lucas said: “This Government’s secret meetings with oil companies risk- damaging the UK’s credibility as hosts of COP26. Instead of pacifying polluters and being driven by the pursuit of corporate profit, the UK’s trade policy should be a force for good in the world – with delivering on the Paris Agreement at its heart.”

In statements given to Channel 4, the oil companies at the dinner all reiterated their support for the Paris Agreement, saying that though they back the move away from fossil fuels they believe natural gas will play a key role in reducing global emissions, particularly as an alternative to coal power.

BP said: “We advocate for natural gas in meetings around the world because it’s an important part of our business and has a critical role to play in the transition to net zero.”

Both Exxon and Chevron stressed that, even in its low-carbon scenarios, the IEA still forecasts natural gas will be part of the global energy mix come 2050. A Chevron spokesman told Channel 4: “One lower-carbon scenario against which we test our portfolio is the IEA’s Sustainable Development Scenario.

“Under the SDS, although natural gas demand declines across Europe, the Americas, and the Middle East, it continues to grow in Asia, and accounts for about 23 percent of global energy demand in 2040.”

Exxon added: “The power sector’s switch from coal to natural gas is a main reason why US emissions have declined more than those of any other country since 2000. Many national and state governments have included a shift to natural gas in their carbon-reduction programs, recognizing the contribution that natural gas can make.”

A Foreign Office spokesperson said: “To achieve net zero we need to speak to a variety of partners across different sectors, including those in the energy industry.

“This was a routine engagement with the energy industry focused on the importance of the transition to a clean energy future.  We discussed their investments in renewable energies and their decarbonisation plans, and we were not lobbied.

“We welcome new commitments to decarbonise made by these companies since this meeting.”

This story was also run by