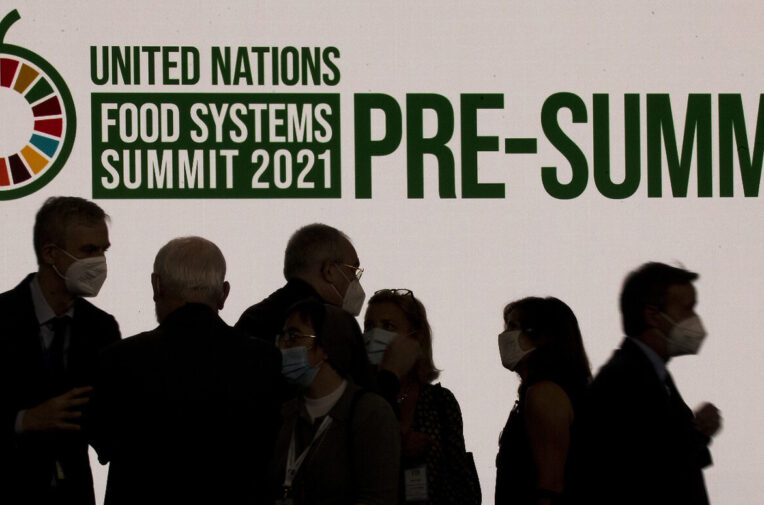 A coalition of meat industry associations has pushed for the upcoming UN food systems summit to boost global meat consumption and promote intensive livestock farming despite its environmental footprint, Unearthed can reveal.

The findings have prompted the UN special rapporteur on the right to food, Michael Fakhri, to warn that powerful agribusiness interests could “dominate the discussion”, leading to disappointing outcomes.

In a draft position paper prepared in June for the summit, a group of industry associations including the International Meat Secretariat and International Poultry Council called for the UN to support increased meat consumption worldwide, arguing that “advances in intensive livestock systems” would “contribute to the preservation of planetary resources.”

The associations – who represent leading corporations that account for much of the global meat supply chain – wrote the paper in their capacity as key members of the summit’s ‘sustainable livestock’ cluster, a working group set up to recommend policies for the summit.

The document runs counter to calls by the UN’s Intergovernmental Panel on Climate Change for a reduction in meat consumption, particularly in rich countries, to tackle climate change. The IPCC warned that a failure to switch to more sustainable land use could harm efforts to limit global warming to 1.5C above pre-industrial levels.

The UN food systems summit, which takes place in New York on September 23, will make recommendations that are expected to shape government policies on food and agriculture around the world, and inform upcoming global agreements on climate change and biodiversity.

The draft paper, which promoted industry schemes and efficiencies rather than reductions in meat-eating in developed countries, went on to say: “Innovative methods in livestock can also address climate change both in mitigation and adaptation […] Livestock will provide solutions also for the challenges of today.”

The draft paper triggered a rift between the meat industry, supported by the delegations of Brazil and Argentina – both major meat-producing nations – and some scientists and NGOs, who were added to the group once it had already produced the initial draft paper.

Philip Lymbery, global CEO of Compassion in World Farming, who was part of this new intake of contributors, told Unearthed:  “When I was appointed a co-lead to the sustainable livestock solutions cluster, the first thing I noticed was that the working group was heavily weighted toward industry interests.

“The primary solution being put forward was that the world needs substantially more livestock production, tweaked by technical innovations, led by farmer-driven roadmaps. It seemed like more of the same, with lip-service to sustainability. Alternative voices in the working group had been largely ignored.”

In late June – by which point all other summit clusters had submitted their documents – members of the group clashed on a conference call meant to negotiate a new draft. According to notes seen by Unearthed, a representative from the International Poultry Council said it could not support any statement that suggested the industry is not already sustainable, while the International Dairy Federation argued against the framing of a “transition” to sustainable agriculture.

Dr Marco Springmann, an Oxford sustainability academic added to the cluster alongside Lymbery, said: ”It seemed to me an unscientific process and a shouting match I didn’t wish to be involved in.”

The heated call prompted the meat industry associations to write to senior UN figures threatening to pull out of the summit in protest. Organisations, including the Meat Secretariat and Poultry Council, wrote: “It became clear in the last call / online discussion that the very solid foundations for sustainable livestock development that have been built up over more than a decade by science led organisations are being disregarded in favour of anti-livestock rhetoric within this cluster.”

If the meat organisations’ concerns were not addressed, they warned: “we cannot continue to devote time to a process in which it is clear that we are only there to lend a veneer of inclusivity while in reality some cluster leaders are pursuing their own ideological agenda.”

Hsin Huang, Secretary General International Meat Secretariat, told Unearthed: “Reducing the numbers of animals in developed countries will only lead to more animals produced in less efficient systems in developing countries. And that will make emissions issues, environmental issues, resource use issues and welfare problems worse. A better way forward is to think about how to combine the best aspects of intensive (mainly industrialised) and smaller scale (mainly developing country) systems.”

Dr Matthew Hayek, an environmental science professor from New York University who also joined late in the process, told Unearthed:  “While stakeholder participation is important, a conference of this significance should not give incumbent industries a platform to deny or minimise the scientific consensus.

“While improving animal agriculture is important, it is insufficient; we know that reducing consumption of animal-sourced foods is necessary to reach our climate targets. Industry voices have protested the inclusion of this science.”

Mr Hsin of the International Meat Secretariat told Unearthed: “I find it laughable that we could be seen to be lobbying the UN FSS [Food Systems Summit]. We have been knocking hard on the door of the UN FSS since February, when we sent a letter, asking to constructively participate in writing the narrative on the role of livestock in sustainable production systems.”

He added: “Our criticism of the UN FSS is that it is not inclusive and we, the livestock sector, have been seen as the problem.”

Dr Martin Frick, deputy to the special envoy for the food systems summit, told Unearthed the summit did not aim to “take an unequivocal position”, adding: “This is a space for difficult conversations to happen, respectfully, while acknowledging that there is no single definitive food system that will provide good food, livelihoods and environments for everyone in all circumstances.”

He continued: “When we talk about animal-sourced foods, there is no simple or binary answer. Livestock is central for the livelihoods of small-scale farmers, particularly in the poorest countries. It is also an important source of protein and other nutrients for many who live in fragile contexts.”

Ultimately the UN officials overseeing the summit agreed to let the cluster produce three position papers rather than one.

Hayek said: “Our perspective on reducing consumption was limited to only one of three solution papers; the other two still primarily contain industry-aligned solutions with exaggerated effect sizes.”

Many of the controversial talking points from the initial paper have been adapted to feature in the new positions, from championing technology-driven efficiencies in intensive farms to crediting livestock for “mitigating climate change by stimulating grassland plants to sequester carbon”.

Michael Fakhri, UN special rapporteur on the right to food and an independent adviser to the summit, told Unearthed: “What appears to have happened in its livestock strand is a microcosm of the tension at the heart of the food systems summit. Here was an opportunity to have a frank and difficult and public conversation about power dynamics in the food system, but the summit has failed to create a space to actually interrogate what the root causes of its problems are. I fear the outcomes will disappoint.”

He added: “Food systems today are not sustainable, it’s not conscionable, and when you involve agribusinesses that have money and power in the determining of its future, they will inevitably dominate the discussion.”