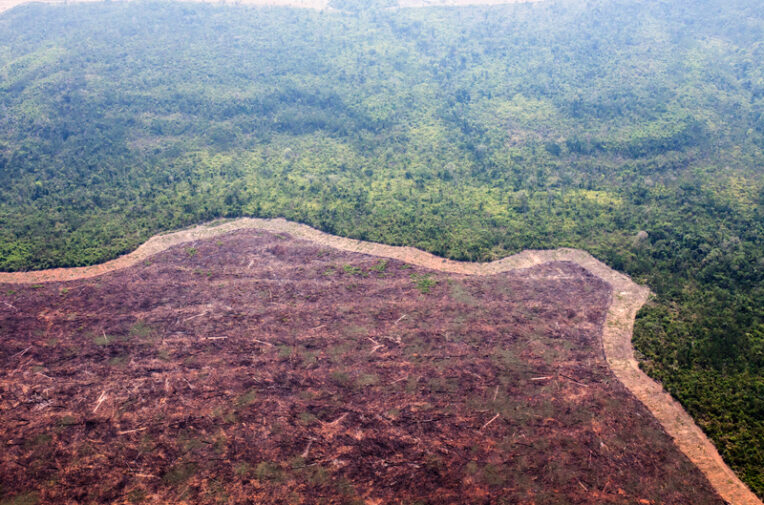 Brazilian soya farmers can still tear down the rainforest for cattle, cotton and maize, undermining claims soya is deforestation-free

Brazilian soya farmers can still tear down the rainforest for cattle, cotton and maize, undermining claims soya is deforestation-free

More than 1,000 sq km of the Amazon has been felled on Brazilian soya farms over the past decade, despite an internationally recognised agreement to protect the rainforest, an investigation can reveal.

Soya from the areas most at risk from this deforestation is regularly shipped to the UK, Spain and other European countries for use as livestock feed on factory farms by major grain traders.

In Mato Grosso state, which stretches over the southern part of the Amazon and grows more soya than anywhere else in Brazil, 1,180 sq km of rainforest was felled from 2009 to 2019 on soya farms to grow other crops or provide pasture for cattle ranching. The majority of this deforestation was illegal.

The landmark Amazon Soya Moratorium – first introduced in 2006, and held up as a success story by NGOs and academic experts – prevents the sale of soya grown on land deforested after 2008. But beef and other crops are not restricted under the moratorium, meaning such farmers are able to sell their soya to traders as deforestation-free while still destroying rainforest for cattle, corn and other commodities.

The findings undermine claims by some global meatpackers, animal feed companies and supermarkets that soya is no longer directly linked to Amazon destruction: one major livestock feed merchant recently boasted “that link does not exist”. Campaigners have branded such claims as greenwashing.

Some municipalities in Mato Grosso are particularly at risk for this type of deforestation, with many farms still cutting down forest for non-soya crops.

The analysis was conducted by the Brazilian NGO Instituto Centro de Vida and shared with Unearthed, the Bureau of Investigative Journalism and Ecostorm. The researchers combined satellite data on deforestation, records of land tenure, and maps that showed where soya was growing in 2019 to calculate the likely area of land affected.

These figures are likely to be conservative: the analysis used a government 2019 redrawing of Amazon borders that reclassified some deforestation hotspots as savannah land, which is not subject to the moratorium.

Studies have shown that the moratorium has successfully stopped rainforest being directly converted into soya fields. ICV’s analysis showed that of all the land deforested in Mato Grosso in 2018, only an estimated 7% was converted to soya crops by 2019.

However, soya farming has continued to expand in the Amazon, overwhelmingly on land that was previously cleared, usually for cattle.  That expansion can still indirectly cause fresh deforestation, as ranchers sell up to farmers at a profit and move deeper into the forest, where land is cheaper.

Abiove, the main association for soya traders, said the soya moratorium had resulted in significant reductions in deforestation in municipalities that produce soy. The association said it was aware of studies that had highlighted deforestation on soya farms for other purposes.

Unearthed, The Bureau, and Ecostorm traced complex soya supply chains to identify soya and other crops from high-risk regions being exported to European countries.

Much of this soya was found to be traded by a handful of major agri-traders including Bunge. The US-listed commodity company supplies Brazilian soya to Spain. In 2021, Spain imported 878,000 tonnes of soya from municipalities with at least 7 sq km of hidden deforestation on soya farms.

Cargill was also found to be shipping crops to Europe from affected areas.

The moratorium was created after a global outcry over Brazil’s  uncontrolled deforestation in the early 2000s – in 2004, 27,800 sq km of the Amazon were destroyed in a year. The agreement is widely credited with contributing to a significant drop in deforestation: from 2004 to 2012, felling of the Amazon plummeted by 84%.

Holly Gibbs, professor of geography and environmental studies at the University of Wisconsin at Madison, said the moratorium had been highly successful at cutting Amazon deforestation directly for soya and had paved the way for subsequent zero-deforestation commitments in Brazil and across the world. But, she added, in many cases “at the same time that soy farmers comply with the moratorium, they continue to deforest illegally for other purposes.”

Gibbs said the findings showed that farmers can be more likely to comply with commercial agreements around deforestation than domestic laws.

“Soy traders are now under pressure to close this gap in Brazil’s environmental enforcement as the world begins demanding zero-deforestation,” she said.

“Legislation in the EU, UK, and US raises the stakes of this ongoing deforestation on soy properties. The soy industry could consider broadening the Amazon Soya Moratorium to close the door to all deforestation connected to soy.”

In 2020 the UK imported more than 140,000 tonnes of soya from municipalities with at least 7 sq kms of hidden deforestation on soya farms, and about 50,000 tonnes of corn – also used for animal feed.

Municipality Gaúcha do Norte had the highest rate of this type of deforestation between 2009 and 2019, with more than 80 sq km. According to Trase, all Gaúcha do Norte’s soya was exported in 2018, the last year for which this type of municipality data is available. Cargill, the US agri-giant, has exported from this municipality. The company said: “We have firmly upheld the Brazilian Soy Moratorium in the Amazon since 2006.”

Raoni Rajão, a professor at the Federal University of Minas Gerais and a specialist in agriculture and environmental policy, said the moratorium was well-monitored, but that the current rules were “insufficient”.

“Only the specific areas where soya is grown are monitored, not the entire property. Farmers have already noticed this loophole.”

The Retail Soy Group, which represents major retailers including Sainsbury’s, Tesco, Lidl and Waitrose said: “The allegations presented from this investigation further highlight the need to have strengthened legal protections of these vital ecosystems. ” The group acknowledged that there were weaknesses and limitations to the moratorium.

The dense Amazon rainforest once covered Mato Grosso’s northern reaches, with savannah and woodland to the east and wetlands to the south. But a soya goldrush beginning in the 1970s has transformed the state into an agricultural behemoth.

Unearthed’s investigation established that certain Mato Grosso municipalities have appeared particularly vulnerable to this hidden deforestation, and found trade links with Europe and China. The analysis also showed a strong flow of soya from these areas to the UK, suggesting a high chance of deforestation in UK supply chains.

Ana Paula Valdiones, environmental transparency program coordinator at ICV, said: “Mato Grosso needs a more comprehensive agreement in addition to the moratorium, one which monitors entire farms, includes other crops and increases the transparency of audit processes and results.”

For the indigenous people who have always lived in the region, the transformation of Mato Grosso has forced extreme changes to their way of life. Marãiwatsédé territory, which stretches across the border of São Felix do Araguaia and two other municipalities in the state, was illegally occupied and deforested in the 1990s. More than 400 farmers were evicted in 2012-13 after a Supreme Court ruling, but for the more than 1,000 Xavante people who live there, the damage was done.

Our team visited the Marãiwatsédé territory in early January, travelling down a dirt road through pastures and soya fields. Marãiwatsédé’s chief, Damião Paridzané, said they still struggle with the long-term effects of the invasion.

Marãiwatsédé means “dense forest”, but it is the most heavily deforested indigenous reserve in the Amazon: about 75% of its native vegetation has already been lost. The community lives in a landscape of abandoned pasture that has barely begun to revert to nature.

Only a few sparse patches of vegetation dot the 1,650 sq km of land reserved for the community. Most of the people live in thatch-roofed single-roomed wooden shacks, with communal cooking fires outside.

Paridzané, sitting in the verandah of his home, said that river levels had dropped, drained by thirsty agribusinesses, and the dwindling forest habitat had hit wildlife populations, making it difficult for indigenous people to fish and hunt traditional game animals like birds, anteaters and monkeys. Without it, the community subsists on the government’s basic food baskets.

A team of Xavante women are working to collect native seeds to reforest the devastated land. “What we want now is to recover the forest, the nature,” Paridzané said.