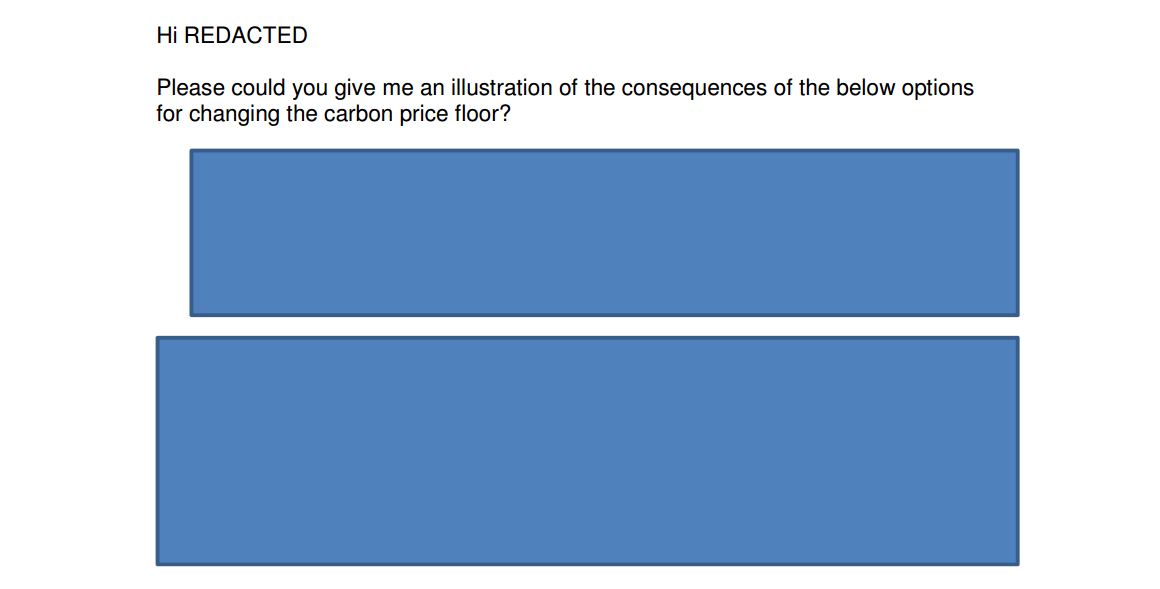 The Department of Energy and Climate Change (DECC) and the Treasury were at pains not to reveal too much about meetings with the Big Six in the run-up to George Osborne’s decision to freeze taxes on carbon emissions, according to emails revealed under an Unearthed Freedom of Information request.

The documents show that, as government officials were busy meeting representatives from the Big Six energy companies in the run-up to the Chancellor’s decision, requests from the public asking for details about the government’s carbon plans sent the department’s into a tizz.

One email from a DECC official to the Treasury, dated February 5th 2014, one month before the budget announcement, speaks of the concern in the government about releasing details of the negotiations over carbon floor price.

It warns: “you need to be aware that DECC has received two FOI/EIR requests on CPF.”

Yet another REDACTION storm

“We now need to go through this and identify what can be released and within that what should be redacted. Given the explicit link with HMT (Treasury) and the fact that CPF is a HMT policy, we’ll obviously want to clear any release through you guys also, so this is to give you a heads up that either myself or someone else in my team will be sending over a proposed response in the next week or so.

“As ever, these things come in at the worst of times!”

And as ever officials did indeed go on to make numerous redactions leaving us with little idea exactly what role lobbying from major energy companies may – or may not – have played in the government’s decision.

The release does reveal, however, that the DECC repeatedly held meetings with representatives from the Big Six energy companies shortly before deciding to freeze the carbon tax. Energy firms were – at the time – publicly calling for a scrap in the carbon tax.

One message, from January 2014, which has the names of both send and recipient redacted, reads: “you want to call the Big 6 and the investment funds we spoke to in the last few weeks that may be useful [list shows RWE, EDF, Scottish Power, SSE, E.ON, Infrared, Darragh, Greencoat]. DECC is likely to also call these stakeholders to ensure that the messages are understood, pick-up any other DECC issues.”

Unearthed broke this story in September of last year.

In one week in January 2014, representatives from DECC spent six hours with members of the Big Six and other ‘stakeholders’ in meetings to discuss the government’s carbon plans. At one point in the emails, a civil servant praises the “meeting stamina” of their colleague.

In last year’s budget, the Chancellor announced in his budget that the carbon floor price would be frozen at 2015 levels of 18.08 pounds per tonne.

First introduced in the 2011 budget, the carbon floor price was described as the government’s policy to get fossil fuels out of the system and was – initially – a central part of the coalition’s claim to be the greenest government in British history.

A study by Imperial College last year found that government projections that coal plants could be retired by 2027 were overly optimistic. To date there are 16 coal plants in the UK.

As has become par for the course under the coalition government, the emails were heavily redacted before being sent to the Unearthed team.

How about some more REDACTIONS?