Interview: ‘There is no way they could ever clean it’ say Indigenous leaders on Arctic oil spill 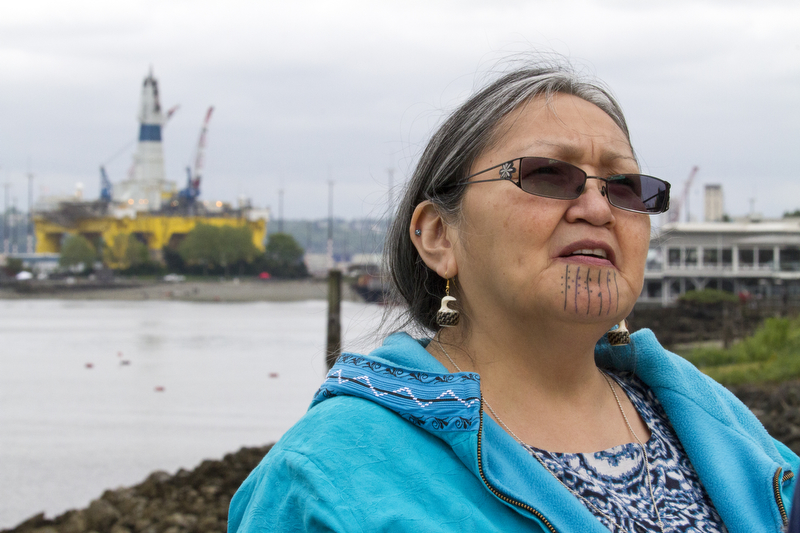 Shell plan to start exploratory drilling for oil in the Chukchi Sea off the coast of Alaska this summer, near to Mae’s home in Point Hope.

The settlement’s Inuit name is “Tikigaq”, meaning forefinger – apt since the land protrudes out into the ocean.

The promontory is flanked to the north, west and south by the Chukchi Sea and Hank, of the Inupiat tribe, tells Unearthed the community have nets off the beach in all three directions to catch their food.

In fact the majority of people living at Point Hope, one of the oldest settlements in North America, are subsistence hunters using traditional techniques – as are many people in the native communities around Alaska’s coast.

There is high unemployment in almost every small coastal community and Indigenous Peoples rely on traditional meat preserving techniques to see them through the winter.

If there’s a spill, every community, every coastline, all the animals and their food chains will be affected says Hank. After all, she points out, she’s seen what happened elsewhere.

Chemical dispersants – which a study says are most feasible way to clean up an oil spill in the Arctic Summer drilling window – are highly toxic.

Several years after the 2010 Deepwater Horizon blowout in the Gulf of Mexico, the combination of oil and dispersants is being blamed for the massively depleted stocks of oyster, crab and fish – what if the same were to happen in the Chukchi Sea?

Many Alaskan natives would be unable to afford to buy meat or other basic groceries as the costs are so high in rural Alaska, Hank says, “a gallon of orange juice in my community is over $20”.

And the evidence suggests there may be a spill. The latest environmental impact assessment found a 75% chance of at least one large spill releasing over 1,000 barrels of oil over the 77-year oil extraction period in the Chukchi Sea.

Shell says is that it can clean up 95% of the oil, limiting any damage.

Hank disagrees – the harsh Arctic weather will get in the way. “In the event of a major spill there is no way they could ever, ever clean it,” she says.

If the spill went under the ice, the ice would “suck it up, and shift and move a lot”, making it impossible to remove, she adds.

But it’s not just about the risk of a spill.

Seismic testing – loud airgun pulses fired off in order to learn more about the geology of the seabed – could also be detrimental to marine animals and represents a risk to subsistence communities, according to Hank.

In her coastal community on Point Hope every time a seismic test is done tomcods are significantly depleted for two or three years – and when they come back they are skinnier.

“It’s really sad that industry has no morals as to human life or their food security.”

“The thing is that they can’t see through the water to see what is there. A seal or whale could be underwater for hundreds and hundreds of feet without coming back up. So they may not see it while they are doing seismic testing, or planning on exploratory drilling,” Hank explains.

Alaskan natives are also among the people most impacted by climate change – some have already had to relocate as dwindling ice reduces coastal protections and depletes the shoreline, says Faith Gemmill-Fredson (above), the founder of REDOIL (Resisting Environmental Destruction On Indigenous Lands).

Gemmill-Fredson, from the Pit River/Wintu and Neets’aii Gwich’in tribes, lives at the foot of the mountains in Arctic Village. The risk isn’t only to coastal communities, she says, as all of the native communities share traditional foods:

“What affects her community affects my community, what affects us affects them. When one nation loses the right to subsist on their own foods, it affects all of us.”

Inland tribes hunt a variety of animals for subsistence including Porcupine Caribou, whose herd numbers have been dwindling as a consequence of climate change.

In one incident in 2000 thousands of newborn Porcupine caribou calves drowned crossing a river that normally would have been frozen over, Gemmill-Fredson says.

“The ice had broken early” and the young caribou “couldn’t swim in swift conditions with ice”, she continues. The incident, which may have been linked to climate change, saw 15% of the herd gone.

Whole ecosystems that support freshwater fish and migrating birds are also being impacted by melting permafrost causing retreating lakes, according to Gemmill-Fredson:

On top of this, forest fires and storms in Alaska are becoming more severe, and polar bears and walrus have been spotted much further inland than they have ever habitually ventured before.

“We’re not supposed to have polar bears [in Arctic Village]… [but now] we’ve had polar bears coming to our mountain, because they are hungry. There’s no more ice, they have no where to go for food, so they’re coming inland,” says Gemmill-Fredson, “That’s new”.

“Our whole natural world is shifted. Nothing is the same. We can’t predict anything any more.”

Read the full transcript of the interview with Mae and Faith.