What do low and volatile oil prices mean for Shell’s Arctic drilling? 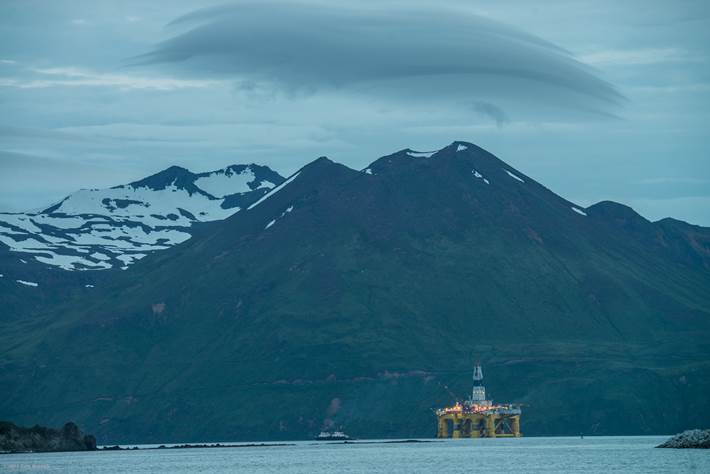 The project in the Chukchi Sea is only in the exploration stages right now and could take 10 or 15 years to get to commercial production – so things may change, but recent analysis suggests even if the oil price doubles the project still won’t break even.

In fact if the current low oil prices shy of $50 per barrel stick around to 2030, even Shell concedes its Arctic oil extraction mission – which by next year will total around $10bn in exploration and drilling costs and license fees – will have been for nothing.

Ann Pickard, Shell’s top executive for the Arctic, has said that Arctic oil from the Chukchi Sea would be competitive at $70 per barrel, a number that has been echoed by Allianz, which is a significant investor in Shell. Which would mean, by its own calculations, unless the oil price increases by at least $20 per barrel in 2030 Shell may be forced to abandon the project.

And these numbers may be a little on the optimistic side.

One analysis by Deloitte, based on energy analyst Rystad data, found that current Arctic oil projects reach breakeven at between around $50 and $90 per barrel – above where we are now but not inconceivably where prices might be in a decade.

The problem is this is based on oil production in current (2013) onshore and offshore Arctic circle projects which operate in less challenging conditions than the Shell exploration site on Burger prospect, with lower associated infrastructure costs. 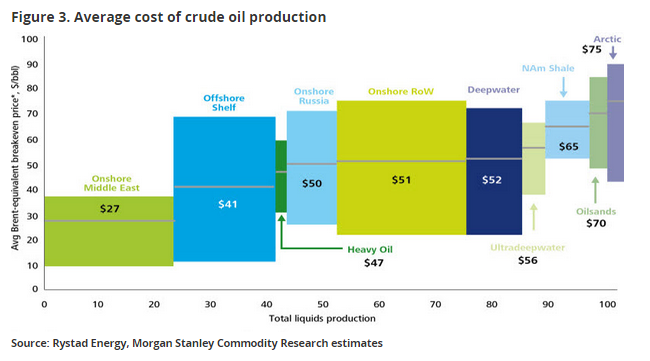 Not all Arctic oil projects are the same – indeed some, such as BP’s well in Alaska’s Prudhoe Bay, are onshore, and are likely to be more straightforward and cheaper than offshore projects. If Shell’s Chukchi Sea project is successful it will be the first to extract oil from the outer continental shelf (OCS), which brings with it many new challenges and complexities. Indeed Shell often boast of their desire & ability to drill in ever more challenging and remote areas.

This means you could expect opening up the Burger prospect to be at the top of the cost curve, exceeding current Arctic oil production breakevens.

James Henderson, a researcher at Oxford University’s Institute for Energy Studies and Nick Butler, a former vice president of strategy at BP and government advisor, told the Guardian that for Shell’s Arctic project to be viable oil would need to be around or around $100 per barrel depending on yield. That would be over double today’s oil price.

But it could be pricier than that. Energy consultants Rystad have forecast a breakeven price of between $150 and $250 per barrel for various fields in the US Arctic OCS – so between three and five times the current  oil price.

Espen Erlingsen, a senior analyst at Rystad told me that the difference in the Arctic Circle oil production costs and the forecasts for OCS oil price breakeven can be at least partially explained by the uncertainties around oil production from fields that have not yet been explored. “You don’t know what it will be before discovery”, he said.

Of course it is tricky to estimate prices for as yet untapped wells; these estimates are all likely to be quite speculative, and we don’t know all the assumptions behind them.

Gazprom’s Prirazlomnaya has just added another well to its site and says it is producing oil at $60 per barrel – but despite substantial tax breaks and state investment in infrastructure the platform runs with an almost $600 million in deficit.

But quite apart from differences in geology, there are key differences that could make the cost of Shell’s Arctic mission high compared to existing schemes – which form the basis for some of the lower cost estimates for Arctic oil extraction.

During the costly exploration stage Shell’s rigs are exposed to severe weather conditions and can operate only during a drilling window of three months.

Even within this period it’s start-stop. Only a couple of weeks ago Shell had to suspend its drilling for a handful of days because of 15 foot high waves and strong winds. This means costly equipment sits around idle and has to be sent to and from the exploration site each year for its duration.

And then there are costs that are unique to opening up an area to exploitation. If Shell goes ahead with commercial development in the Chukchi Sea, it will have to invest in the infrastructure needed to transport the oil to a terminal and link it up to Alaska’s Trans-Alaska  pipeline.

Capital and operational costs are only one half of the equation, though. The other side is how much can be earnt from the oil. Similarly to costs, long-term oil price forecasts and the amount of oil found in the blocks are difficult to predict.

How much oil is key

The more oil there is the greater the benefits of scale.

The US Geological Survey estimates there is a 50% chance of finding 90 billion barrels of oil in the whole Arctic region – although of course there could be more or less with varying degrees of probability.

For the Chukchi Sea, the area Shell is exploring, the USGS estimates a mean of 15 billion barrels – though we don’t know how much of this oil could be expected to be found in Shell’s Burger prospect blocks.

Strangely, given the USGS estimates, industry sources hint that Shell thinks there could be 30bn barrels in the prospect – a rumour that hasn’t been verified by the firm, which has not released any official estimates for the resource.

It’s a complex guessing game as firms have an interest in talking up their prospects to gain political and financial backing and large – round – numbers tend to abound.

The US government’s Bureau of Ocean Management department wrote in an impact assessment of the Chukchi Sea lease sale that “the most likely result of Lease Sale 193 is the limited and unsuccessful exploration of leases, and nothing more.”

If the development of the whole area – not just Shell’s blocks – does go ahead, BOEM says its experts determine that about 4.5 billion barrels of oil could potentially be gleaned.

If they find a lot of oil – and 30bn barrels is comparable with resources in the Middle East – low prices and oil price volatility over time can be absorbed more easily into the project’s balance sheet.

But if – in line with the lower estimates – they don’t find much oil, the oil price could be a crucial factor in the decision not to go ahead with commercialising production.

We really don’t know what oil prices are going to look like in long-term, though. They’re determined by global markets influenced by not only supply and demand but also climate policy and geopolitics.

But right now, oil prices are low and swinging wildly, in a rout that has lasted since June last year. Oil prices (Brent crude) are around $50 per barrel, about half of the price they previously hovered around. The prices have been affected by an oversupply of oil from OPEC countries and a glut of oil production in the US, as well as Chinese economic shocks.

The IEA says it sees the global oil glut enduring next year. What happens in the next three to five years is hotly contested, though Goldman Sachs say oil will remain at $50 per barrel in 2020 – and accurately predicting what it might be out to 2030 is downright impossible.

In longer timescales climate policy could become an increasingly important factor in the oil price. If we limit global average temperature increase to 2 degrees of global warming – the internationally agreed threshold beyond which there are catastrophic consequences – oil demand will drop and this could exacerbate or give rise to an oversupply of oil on the market.

In fact, an analysis by Lorne Stockman found that the Arctic drilling go-ahead from the US administration was based on a US oil demand forecast consistent with 5 degrees of warming.

The issue with uncertainty over the oil price is compounded by oil price volatility – and it is at its most changeable in 24 years (2 September). Goldman Sachs recently said the oil price could still fall to as low as $20 per barrel.

On top of the uncertainties about oil resource size and the oil price, there is the risk of a major spill in Chukchi Sea – if there was it would wipe out over a year of Shell’s profits with one fell swoop. There is a 75% chance of a spill in the Chukchi sea over the 77 years the area can be explored and drilled.