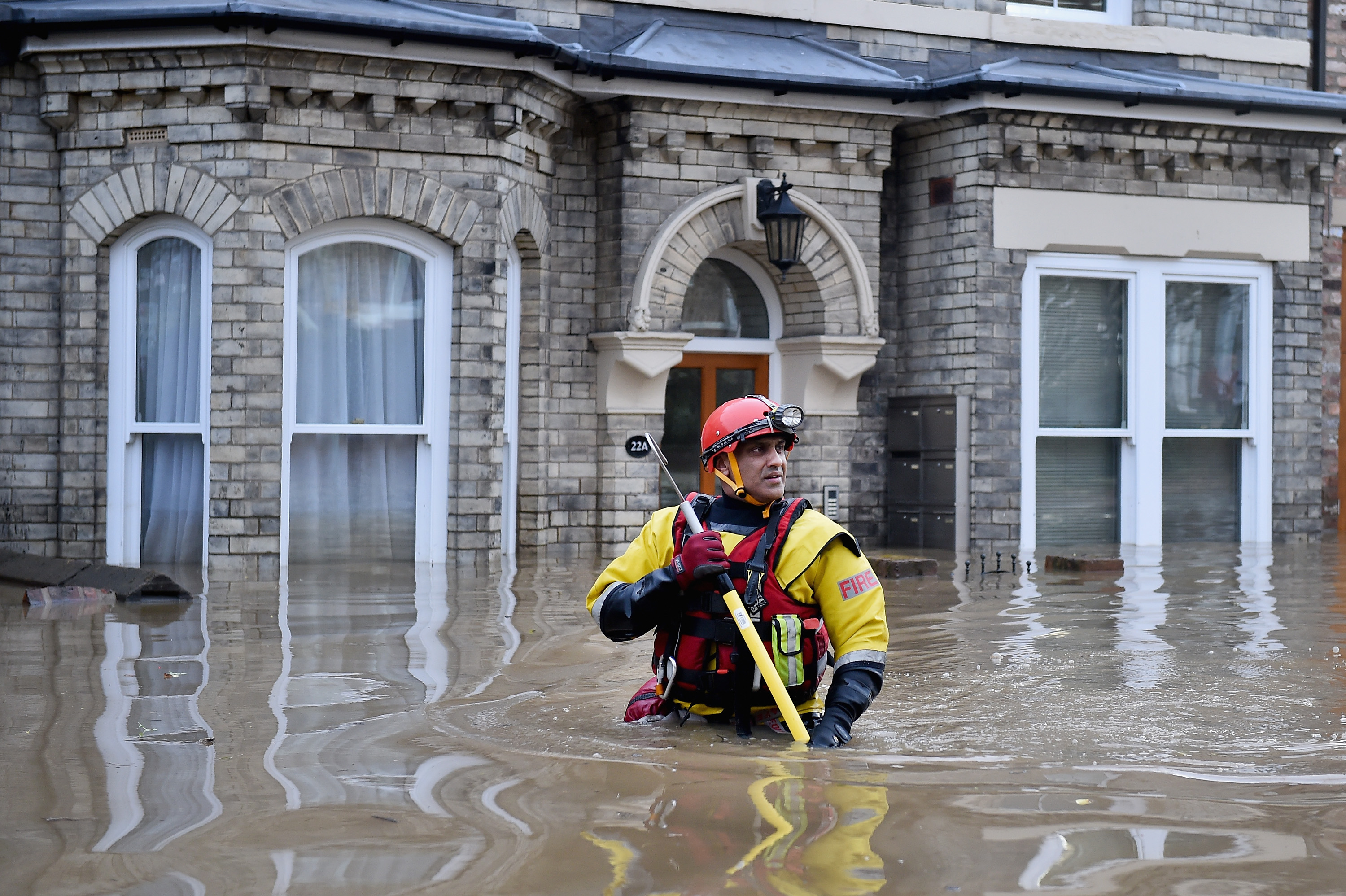 Flood alerts or warnings were issued in at least five of the government’s flagship 20 new housing zones last month — according to an ongoing investigation.

An analysis of Environment Agency (EA) data from December’s flooding revealed alerts were issued in four zones. A more serious flood warning covered one project in the North East, which may have been inundated with flood waters.

Four of the affected sites are also in areas of serious flood risk, according to a recent Greenpeace investigation.

The earlier research found that nine of the government’s 20 out-of-London housing zones overlap with flood risk areas identified by the EA.

This comes as the government’s climate advisers – the Committee on Climate Change (CCC) – warn tougher controls are needed over where to build new homes and how water is managed.

Given the housing zone sites are currently uninhabited it is hard to verify if particular projects were affected by floodwater without photographic evidence.

While the zones hit by alerts of ‘possible’ flooding are not believed to have been significantly affected this time, the Castleford housing development may well have been.

Almost the entire zone – made up of several planned sites (shown below) – was covered by a flood alert, and one particular area around Lock Lane (circled below) was under a warning, which means it expected flooding.

Meanwhile, images sourced by Unearthed suggest local roads and fields were under several feet of water. 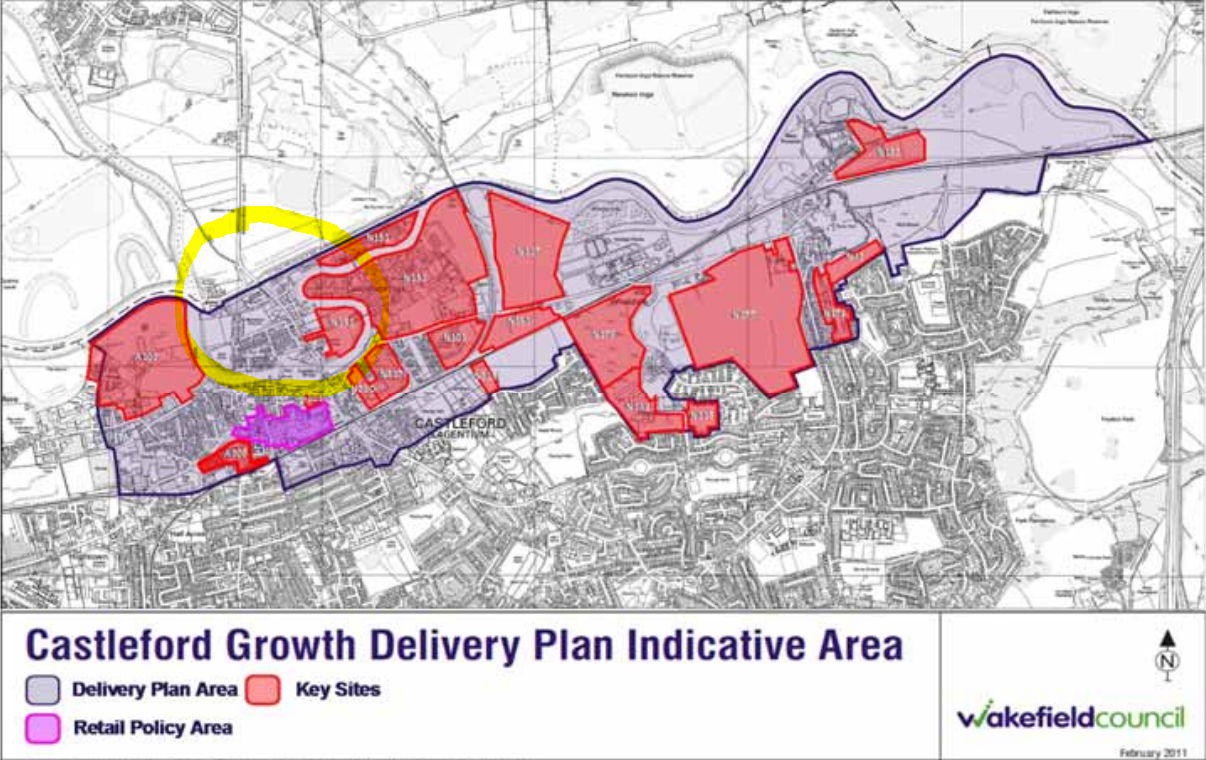 The local council and EA have been unable to confirm or deny whether the site has been flooded in December.

British people across the north of England and in Scotland are still recovering from the devastating floods — which have caused damage worth £1.3bn in insurance claims so far this winter.

The floods were the result of torrential rain during Storms Desmond, Eva, and Frank.

Record-breaking rainfall in December was caused by climate change and a stronger than usual El Nino effect.

On 27 December there was an EA flood warning for the Aire River in Castleford, within a large meander of the river (shown below). The warning covered two of the sites of the new housing project.

The Aire river burst its banks on 27 Dec after heavy rains that coincided with Storm Eva hitting the north of England.

This resulted in the flooding of Lock Lane (shown below in a local news report), which was not reopened till 30 December. 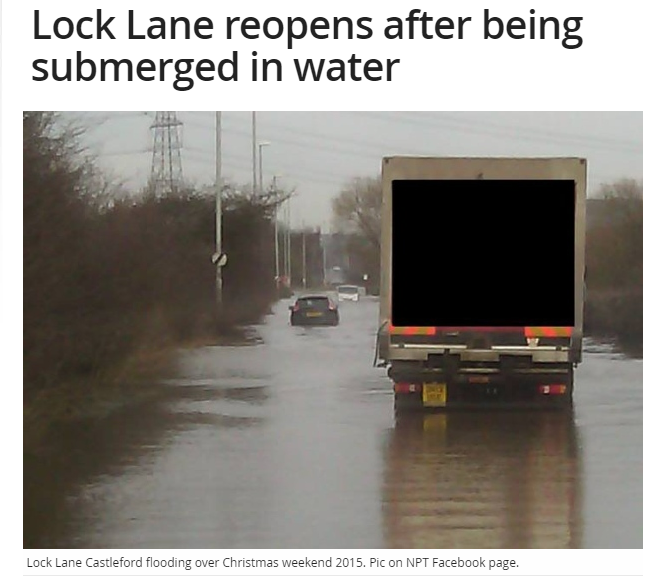 The flooding of Lock Lane is significant – because the road is near some of the sites of the planned new housing project. A photo taken by a witness and posted on Twitter, shows a field just north of the sites also underwater.

Where is the the field exactly? Well the witness Ben Jordan told Unearthed the area in the photo was the one filled in red in this image, below. 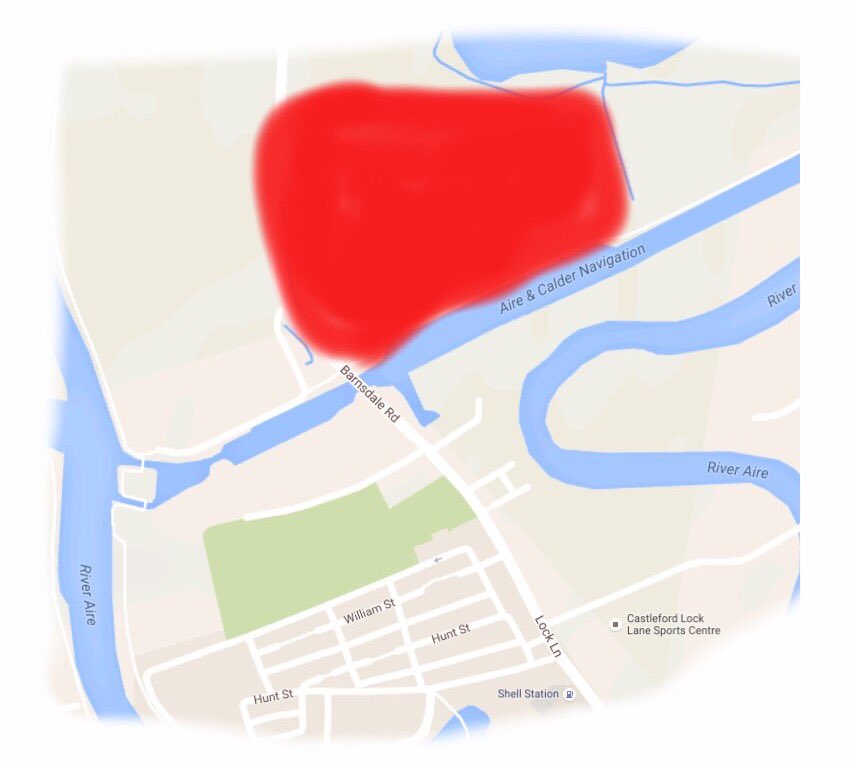 All of which suggests that the brownfield sites south of the Aire and Calder Navigation were also flooded, though without a time-lapse satellite image, we simply can’t be sure.

Neil Rodgers, service director planning, Transportation and Highways at Wakefield Council said: “We are not aware of any significant issues with flooding, as fortunately, our district was not affected as badly as neighbouring areas.”

Local authorities suggested that flood risks could be mitigated.

The newly-appointed Yorkshire flood envoy, Robert Goodwill MP, announced a U-turn on flood defenses on the Aire River on 4 January after some houses in central Leeds were flooded. This would be upriver of the Aire River developments.

Rodgers from Wakefield Council also said: “The Council’s Local Development Plan (LDP) includes sites for new housing.  All of these sites were assessed for flood risk before they were included in the LDP framework.

“As part of any future development plans it is standard practice to put in drainage systems to meet the current national standards to mitigate flood risk.

“We work with potential developers and partner agencies throughout the planning stages of any new development, including pre- applications, to achieve the best sustainable drainage solutions.”

However mitigation efforts may struggle to keep up with increased rainfall as a result of climate change.

A new rapid-response modeling study has shown that global warming made the torrential December downpours 50-75% more likely, though the natural variation of the stronger than usual El Nino also played a role.

Paul Cobbing, CEO of the National Flood Forum, a charity supporting communities affected by flooding, told Unearthed: “Are developments currently going ahead going to deliver resilient communities in 30 years time? We think it’s the role of government to commission research into whether the extremely complex planning system is delivering this.”

The committee estimates that “each year 1,500 new homes are built in areas of high flood risk and 3,100 homes per year in areas of medium flood risk”.

Not eligible for insurance

But it’s not just government finances that are at risk, people could also have problems getting insurance if their home is built on a floodplain after 2009. This is because the planned homes would not qualify for the government’s forthcoming flood insurance scheme, called “Flood Re”.

A spokesperson for the Association of British Insurers told Unearthed that the reason the scheme does not cover properties built after 2009 is to “to prevent inappropriate developments on high flood risk areas” and “stop homes being built on areas at a high risk from flooding and that can’t be insured”.

Apart from potential flooding in at areas planned for development in Castleford, there has also been several flood alerts at housing zone sites.

The alerts suggest that whilst the areas may have dodged the floods this time they remain at risk – particularly if weather patterns change.

In late December there were well-publicised floods in the city of York.

Flooding was severe and widespread in the city and there was a flooding alert (which means flooding is possible, see below screengrab) for the teardrop-shaped housing zone site near the National Railway Museum for all three storms. 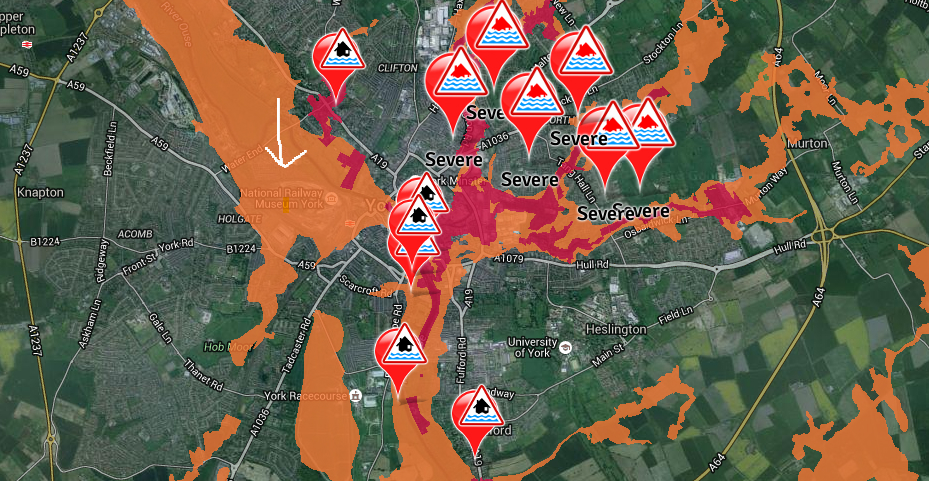 The recent Greenpeace investigation into housing and flooding risk found part of the site is at a medium risk from flooding.

York City Council said the site was not flooded in December and is on a rise.

The new housing zone planned for the Lincolnshire town of Gainsborough was also subject to a flooding alert – this time only for 28 December (shown below). The prior Greenpeace research found the sites were going to be built on areas deemed to be at high flooding risk by the EA. 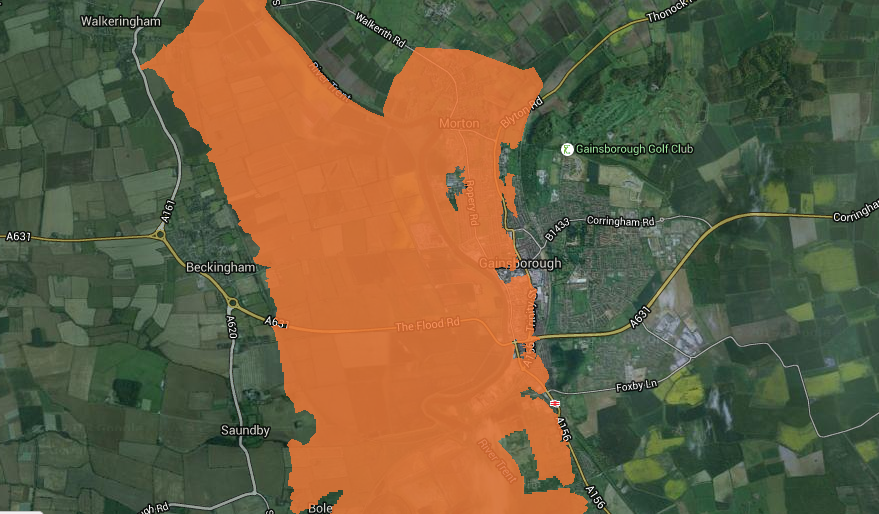 A spokesperson from West Lindsey District Council said there was no flooding in the housing zone sites planned for Greater Gainsborough.

In Gloucester, there was a quite a widespread flooding alert, including some areas of the quays, which is one of the housing zone sites planned for the town. The flooding alert occurred during all three storms. The dockside site also overlapped with patches of high and medium risk, according to the previous Greenpeace findings.

A council spokesperson told Unearthed there was some localised flooding around Haw Bridge but none in the city centre. They added: “There was no flooding in that area of the docks. It’s near a canal so the water level is controlled.”

There was also the possibility of flooding on the edges of the Slyfield site in Guildford, Surrey. An orange alert was issued on 30 December (shown below). The site also overlapped with flooding risk areas.

The Guildford Borough Council did not respond to questions when asked whether the Slyfield site had been flooded in December over the phone or by email.

Despite risk, some sites dry

Despite being susceptible to flooding – having areas with high or medium flood risk – or being in the north of the country, some towns with planned housing zones were not subject to flooding alerts during this December’s storms.

These included Hinkley housing zone near Bridgwater, Somerset, an area renowned for flooding – and Bassetlaw and Gedling, both in Nottinghamshire; Poole; a site in Thurrock; a site in Derby; and Gateshead.

In the North of England, Preston had some flooding alerts and warnings on its outskirts in the December period. There was also some localised flooding in Preston (shown below) around Boxing day. But the a housing zone planned for Preston inner city was unaffected by December’s floods, the local council confirmed. 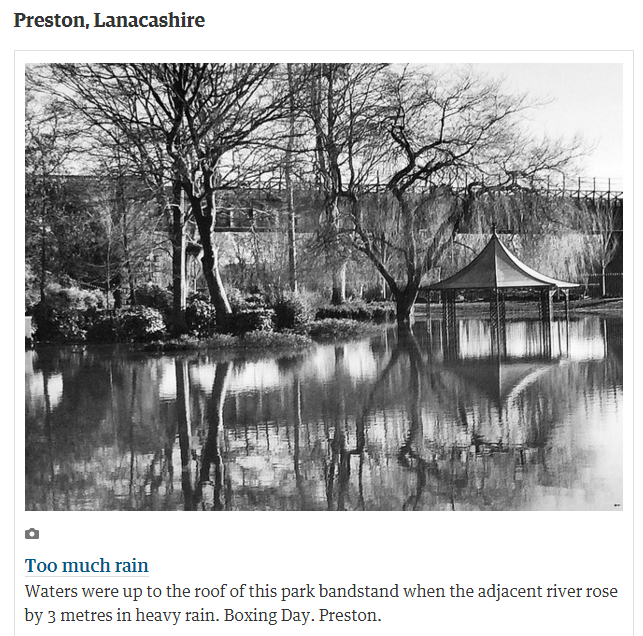 There was also some flooding in Stoke on Trent, but a council spokesperson told Unearthed: “It has rained a lot but there were no major floods” and later by email stated “we have had no reported problems with flooding on any of the sites [that make up the housing zone project”.